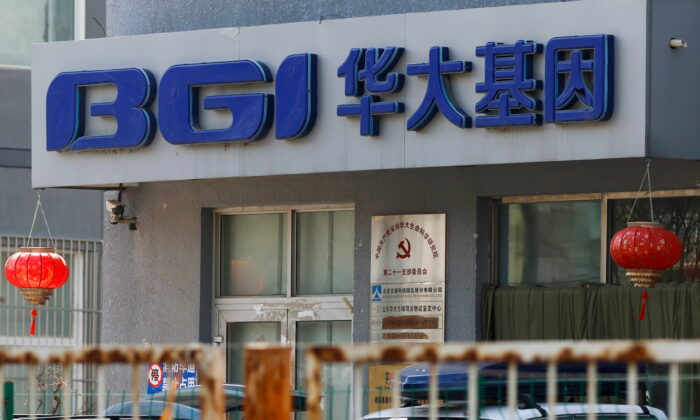 The logo of Chinese gene firm BGI Group is seen at its building in Beijing, China, on March 25, 2021. (Carlos Garcia Rawlins/Reuters)
Threat from Communist China

As reports have emerged that Chinese military-linked firms gather American DNA, these firms are now capable of creating digital replicas of Americans, according to John Mills, former director of cybersecurity policy, strategy, and international affairs at the Department of Defense.

“They have the capacity to create these complex models of each of us. They’re making digital twins of us,” Mills told the “China in Focus” program on NTD News, sister media outlet of The Epoch Times.

He pointed to BGI Group, formerly Beijing Genomics Institute, which is the leader of the CCP’s genome project, as well as a leading producer of COVID-19 tests.

In 2017, the company’s leader boasted that it had reached an industrial level of success in progressing through genetic reform and gene editing, to gene synthesizing, and mass-producing multiple viruses, bacteria, and large yeasts.

“They can do all kinds of nefarious things with no constraint or loss. They have our data.” That data could be used to tailor a follow-up virus to target certain non-Han ethnicities, Mills warned.

That includes every Chinese company and every company that is incorporated in China, even if it is American in origin, he stressed. “They are the eyes and the ears and the collectors.”

That means when Americans give information to these companies, their data is essentially going to Chinese intelligence, Mills said.

“So they know about every one of us … I would presume that I have a file in China,” he added.

“They have a long history of targeting some of our best researchers … there is a proven track record that almost immediately veers into national security concerns with China,” he noted.

The cybersecurity expert pointed to Chinese recruitment programs such as the “thousand talents plan,” allegedly to lure foreign academics to work in China, a process that facilitates the transfer of technology and know-how to the regime.

“China was just using money to essentially buy off professors and academics. So they have a very active program to go after our intellectual property, and essentially, to co-opt some of our leading researchers,” he said.

Mills referred to the Biden administration’s canceling of the “China Initiative” launched by the Trump administration in 2018 to combat the Chinese regime’s state-sponsored espionage and theft of trade secrets, calling the move “ridiculous and silly.”

“It’s going to [take] many years for … the CCP to demonstrate they can be trusted in these circles because right now, all the evidence is leaning against them,” he said.

In his opinion, Americans, especially those related to the government sector, should not do DNA tests. Furthermore, he suggested that Americans closely safeguard their medical records.

“Be aware that anything you do digitally … is being vacuumed up,” he warned.

Mills urged the U.S. government to blacklist Chinese entities like BGI Group and ban them from operating in America, citing the national security risk.

“I think it’s very unwise to let them in because it is just like biological warfare,” he said.

“We need to be extremely, extremely concerned,” because data collected by DNA tests is key information for biological warfare, Mills added.”We have to look at that as a threat.”

“This is feeding them. They look at that as the strategic, commanding heights of the showdown with the West, mainly America,” he said.

Antonio Graceffo and Jennifer Bateman contributed to this report.