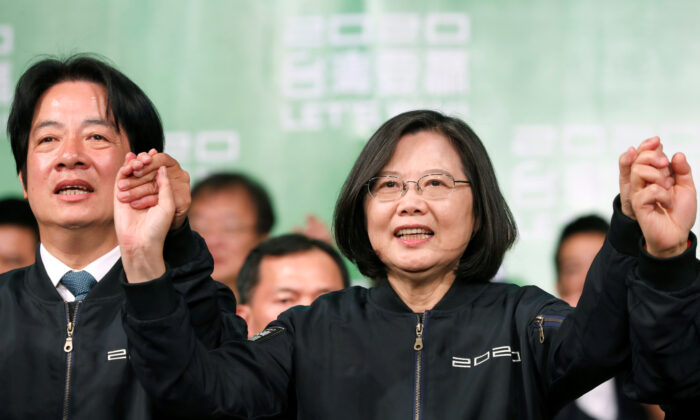 TAIPEI—His policies rejected by Taiwan voters in a landslide re-election for President Tsai Ing-wen, Chinese leader Xi Jinping will most likely continue to tighten the screws on the island, with state media already floating shows of force.

China took center stage in the campaign after Xi sought in a major speech a year ago to get Taiwan to sign on to the same sort of “one country, two systems” model as Hong Kong.

Tsai immediately rejected the idea. Six months later, Hong Kong erupted in anti-government protests, giving a huge boost to Tsai in her efforts to portray China as an existential threat to Taiwan’s democracy and freedoms.

But rather than recognize that its pressure on Taiwan had failed, Beijing’s immediate reaction to the election was to double down on “one country, two systems” and say it would not change policy.

“This administration of Xi Jinping, but I would say more broadly the DNA of the Communist Party, does not do well to reflect and recalibrate in a way that signals reconciliation, compromise or what they would frame as weakness,” said Jude Blanchette, the Freeman Chair in China Studies at the Center for Strategic and International Studies in Washington.

“I thoroughly expect that the conversation right now in Beijing is about turning the screws even more,” Blanchette added.

China says Taiwan is its territory. Taiwan says it is an independent country called the Republic of China, its formal name.

Options for increasing pressure post-election include many of the actions China was taking before: stepped up military drills around the island or picking off more of Taiwan’s 15 remaining diplomatic allies. It could also withdraw from a key trade agreement reached a decade ago.

Widely read Chinese state-backed tabloid the Global Times said in a Monday editorial that military flexing may be the next step.

“We need to plan to crack down on Tsai’s new provocative actions, including imposing military pressure,” it wrote.

China already sailed its newest aircraft carrier through the Taiwan Strait twice in the run-up to the election, and during Tsai’s first administration regularly flew bomber jets around the island.

“For the mainland, ‘one country, two systems’ is a basic policy of the state. How can it be changed just because of one election on Taiwan?” he said.

Since Xi Jinping took power in late 2012, he has overseen a sweeping crackdown on dissent at home, locking up political rivals in the name of fighting corruption and tightening Communist Party control at every level of society.

Internationally, China has faced opprobrium for locking up Muslims in its far western region of Xinjiang as part of what it calls an anti-radicalization program.

And in Hong Kong, Beijing has shown no sign of giving into demands for greater democracy there, and continues to face censure from Western countries for how it has dealt with the protests.

This month Beijing replaced its top man in the former British colony with an official known for enforcing Communist Party discipline in coal-rich Shanxi, where corruption was once likened to cancer.

Alongside strident calls to use force to take Taiwan, there has been some rare criticism on China’s Twitter-like Weibo site of China’s Taiwan Affairs Office’s failure to win over the island.

“You officials there please step down as soon as possible. From dawn to dusk you slam Taiwan, but the more you do this the more poison you create,” wrote one user.

The Taiwan Affairs Office did not respond to a request for comment on whether its head, former Chinese ambassador to the United Nations Liu Jieyi, would be replaced in light of Tsai’s huge win.

One diplomatic source, familiar with policy making in China and Taiwan, said it was possible Xi was not being given the true picture of what was happening in Taiwan because officials under him were scared to report bad news.

“In the current atmosphere in Beijing, who wants to be the one to tell the boss that he’s on the wrong track?” the diplomat said, speaking on condition of anonymity.