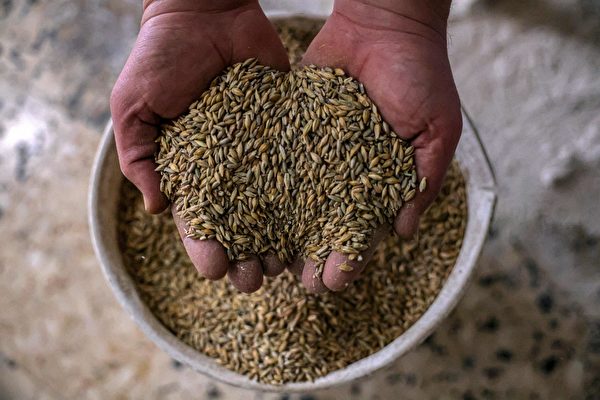 A worker holding wheat grains at a wheat mill, on March 21, 2022. China's food prices have climbed in a short period of time due to a combination of unfavorable factors. (Said Khatib/AFP via Getty Images）
China

China Corn Futures at Record High Due to Adverse Factors

China’s grain prices have risen sharply in a short time due to adverse international and domestic factors. The corn futures reached a record high for two consecutive trading days at the end of April. Then on May 2, prices swelled to $487 a ton enabling a 13 percent price increase in China’s corn futures from the beginning of 2022.

At the same time, corn prices on Chicago’s Board of Trade (CBOT) were also approaching record highs, exceeding $8 per bushel. This represented a 35 percent increase from the beginning of the year.

Ukraine and Russia are the world’s largest exporters of wheat, barley, sunflower oil, and other agricultural products. The war between these countries is expected to weaken the global food supply and drive up international grain and food prices.

Russia ranks first in the world for wheat exports followed in second place by the United States, Canada third, and Ukraine fifth. Russia and Ukraine together account for more than one-third of global grain exports, including barley at 19 percent, wheat at 14 percent, and corn at 4 percent.

Although the Russia-Ukraine war has disrupted the world’s food supply chain, this is not the only reason China’s food prices have risen so quickly. Another factor influencing the price jump was the Chinese Communist Party’s (CCP) harsh “zero COVID” policy to combat the pandemic.

Now that China is in the midst of its spring plowing season, the CCP’s citywide lockdowns and zero COVID measures have made it difficult for farmers in the major grain-producing regions of the northeast to return to their hometowns and plant crops. Farmers are also incurring much higher prices to locate and pay for essential seeds and fertilizers. If this trend continues, China is likely to face a food shortage this year.

Since March, CCP officials say that Jilin Province, a major grain-producing region in the northeast, has reported more than 60,000 confirmed cases of COVID. The truth may be worse since the CCP tends to underreport information that makes it look bad. On April 20, Voice of America reported that many farmhands in the Jilin Province were stranded by lockdowns in cities like Changchun and unable to reach their worksites. Also, by the end of March, nearly one-third of Jilin’s farmers were unable to obtain sufficient fertilizer.

According to data released by China’s National Bureau of Statistics (NBS), grain production in the Northeast region in 2021 reached 144,456,000 tons. This accounted for more than 20 percent of China’s overall output. If the 2022 spring planting season is delayed as expected, China’s grain production and food security will be seriously impacted.

Official propaganda released by the CCP in 2021 states that China has enjoyed a “bumper crop” for more than a decade. But in fact, China has become the world’s largest importer of food and grains for several years in a row.

Liao Shiming, a Hong Kong financial columnist told the Epoch Times that despite the CCP’s continuing claims of a “bumper crop,” China’s grain reserves are in short supply. To address the shortage, the country has been snapping up grain worldwide.

On Dec. 8, 2021, CCP leader Xi Jinping relayed his concerns about the food crisis to the Central Economic Work Conference. He said, “In the past, southern food was transferred to the north, but now northern food is transferred to the south. In some places, a lot of lands were not even planted with food, but with flowers and fruits. So, what about food?”

According to Liao Shiming, “It was not until 1971, after the establishment of the Chinese Communist regime, that food production surpassed that of the late Qing Dynasty. Because food was the basis for the stability of the regime, CCP officials always claimed there were bumper crops year after year.”

In China, people’s lack of willingness to farm is one of the main reasons food production is limited. One farmer from China’s northeast told The Epoch Times, “Nowadays, you can’t make much money from farming, and you may even lose money, so who will farm? Seeds and fertilizers are so expensive, and the government gives some subsidies, but it’s not enough to pay for the village’s fees.”

Lack of arable land is another long-term reason for China’s limited food production. Although the CCP claims it has 313 million acres of arable land, more than the minimum area of land under regular cultivation—the “arable land red line”—set at 300 million acres, the actual amount of arable land has been decreasing. China’s media reported that Xi is concerned about this.

China’s conversion of arable acreages began in 2002 when the CCP launched a nationwide campaign to “return farmland to forest.” Officials claimed the conversion would “improve the ecological environment.”  By 2019, farmers had lost approximately 23 million acres to forest or grassland and additional losses due to soil-related problems were on the horizon.

Surveys by the Chinese Ministry of Agriculture in 2014 found that more than 40 percent of China’s arable land had been degraded. According to the report, it was due to the black soil layer thinning, soil acidification, the organic content of the soil decreasing, etc.

Non-government observers like Liao Shiming once described China’s lush southeastern provinces as “economic growth engines.” Now he says, “the high-yield land there has been largely industrialized and China’s new arable land is in the west. But due to poor rain and weather conditions, that land is unsuitable for farming.”

Another observer, Antonio Graceffo, a U.S. economist and contributor to The Epoch Times, says China has been experiencing a systemic food crisis since 2020. The country has 60 percent less arable land per capita compared to other nations, but also its farmers have felt the impacts of record flooding, the pandemic, and the rising population. Now food prices continue to soar as people are demanding increased amounts of meat and farm-raised vegetables.

According to 2021 data provided by the United Nations Food and Agriculture Organization (FAO), grain prices in the month of September that year rose 27.3 percent over the same period the previous year while food prices rose 32.8 percent.

The FAO notes that China’s sudden and massive increase in food imports is putting pressure on global food supplies and creating uncertainty and unanticipated problems. FAO economist, Abdolreza Abbassian, says, “the only thing we know is the food market will be more volatile in the future than it has been in the past.”