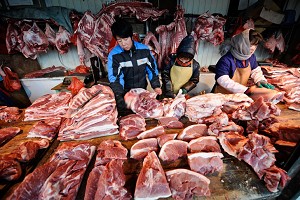 Price of pork in China has increased by 58.8 percent since last January. (AFP/Getty Images)
China

In China, the rate of inflation continues to rise and affect consumers. It has already reached an 11-year high, despite a series of preventative measures taken in Beijing.

According to China's National Bureau of Statistics, the Consumer Price Index (CPI) in January rose 7.1 percent compared to the previous year and 0.6 percent higher than the previous month. This is the highest it's been since September 1996.

Though an increase in the rate of inflation is not unexpected, apprehension and reluctance in general marketing have intensified.

According to official statistics, the major cause of this inflation was the cost of food going up 18.2 percent. Prices in other categories are also rising. Prices of consumer goods have increased by 8.5 percent and consumer services by 2.6 percent. In rural areas the rate of inflation rate is 7.7 percent which is comparably higher than urban areas where it's 6.8 percent.

Compared to the same time last year, prices of pork have increased by 58.8 percent, which is the highest, followed by oil (37.1 percent), vegetables (13.7 percent) and fruit (10.3 percent). Grain, seafood and eggs are also significantly more expensive.

Utility fees have gone up by 5.5 percent since last January. The housing industry saw a 6.1 percent increase overall. Prices of construction and renovating services and materials increased by 5.7 percent, while the overall rent on leased property also rose by 4.7 percent.

This year, Beijing has put into place a series of price control measures combat this inflation. These measures range from severe punishment for price manipulation to ordering some prices frozen. But so far such actions have shown little effect. Experts estimate that the rate of inflation in China will reach 10 percent by February.