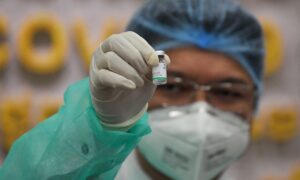 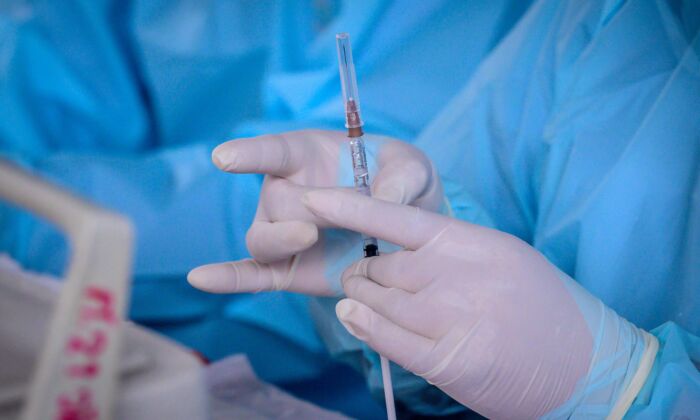 A health worker prepares to administer the COVID-19 CoronaVac vaccine, developed by China's Sinovac firm, at a makeshift clinic at Saeng Thip sports ground in Bangkok, Thailand on April 7, 2021. (MLADEN ANTONOV/AFP via Getty Images)
INSIDE CHINA

After the Chinese regime delivered hundreds of millions of doses of its COVID-19 vaccines abroad, its top health officer admitted on April 10 that the effectiveness of the China-made vaccines are low.

The China-made vaccines “don’t have very high protection rates,” Chinese CDC director George Fu Gao said at the 2021 National Vaccine and Health Conference in Chengdu, according to AP. “It’s now under formal consideration whether we should use different vaccines from different technical lines for the immunization process.”

Chinese state-run media reported on the conference but didn’t mention Gao’s comments on the effectiveness of domestic vaccines.

The efficacies of China-made vaccines were reported at 50.4 percent in Brazil, and 33.3 percent and 11.5 percent in Peru for the Wuhan-made and Beijing-made vaccine respectively—figures that have been denied by the ruling communist party.

China-based vaccine manufacturer Sinopharm reported that its vaccine from the Wuhan institute had an efficacy of 72.5 percent during phase III trials. The Pfizer-BioNTech vaccine has a reported efficacy at 95 percent and the Moderna vaccine at 94.1 percent.

Gao’s words revealed that the party knows that the China-made vaccines might not provide the protection that people expect.

Gao had to date been critical of the effectiveness of the mRNA vaccine being offered by Pfizer-BioNTech and Moderna.

However, at the two day Chengdu conference, Gao suddenly changed his tone as he revealed that authorities were acknowledging the low efficacy of the current China-made vaccines.

Gao didn’t give a clear method of how researchers might mix the different vaccines to vaccinate people. But he implied that different types of vaccines were needed to prevent the CCP (Chinese Communist Party) virus infections.

Last-stage clinical vaccine trials of CoronaVac run in Brazil were shown to have an efficacy of 50.4 percent—just barely passing the WHO’s 50 percent threshold for regulatory approval.

Information about the effectiveness of the China-made vaccines and their side effects have been censored in China.

On March 20, Gao told state-owned media CCTV that two doses of China-made COVID-19 vaccine may not be enough and a third dose may be required to prevent infections.

“The antibodies in the body [produced after taking the inactivated vaccines] may not be so good for preventing respiratory infections,” Gao said.

Gao’s interview was in response to action taken in the United Arab Emirates, where the vaccine’s distributor has said it will start to offer a third dose of the vaccine in March due to low efficacy. The UAE approved the Sinopharm vaccine in 2020.

Hong Kong announced that at least 12 from a total of 412,800 vaccinated people died after receiving their first dose of the Sinovac vaccine, although authorities said the vaccine is not directly linked to the deaths.

Zhou Na, a resident from eastern China’s Qingdao city, told The Epoch Times in a phone interview on April 9 that she knew a fellow citizens who had died after vaccination.

“The doctor said he had chronic diseases and didn’t read the vaccine’s manual carefully,” Zhou said. “The hospital said that the death isn’t a medical malpractice, and refused to pay any compensation to the family.”

Zhou said she was asked to sign a multi-page document before vaccination that listed different kind patients who can’t be vaccinated.

“The document is very long. We thought we were healthy. We just signed the paper [without reading] and got the shot,” Zhou said. All her family have received the vaccine in the past week.