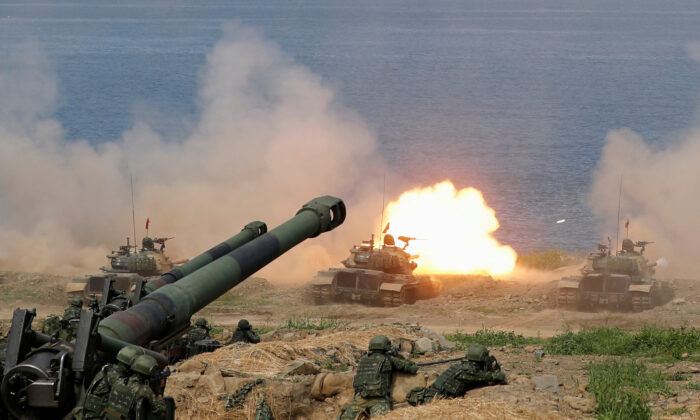 China conducted live-fire exercises off its coast opposite Taiwan on July 30 after warning U.S. House Speaker Nancy Pelosi (D-Calif.) not to visit the self-governed island that the communist regime sees as its territory.

The People’s Liberation Army (PLA) held the military drills in the waters off Pingtan Island, in the narrowest parts of the Strait less than 80 miles from mainland Taiwan.

Pelosi confirmed on July 31 she will visit four Asian countries this week, but made no mention of a possible stop in Taiwan that has fueled tension with the regime in Beijing.

The exercises are the latest in a series of escalating military actions aimed at intimidating the democratic island, which has frequently seen Chinese aircraft incursions in its air defense identification zone for nearly two years.

Pelosi would be the highest-ranking U.S. official to visit Taiwan since then-Speaker Newt Gingrich visited in 1997.

The speaker’s office declined to comment on Pelosi’s travel itinerary because of security considerations.

After reports of Pelosi’s potential stop in Taiwan emerged, the Chinese regime threatened “forceful measures” against the United States and Taiwan. Following those threats, President Joe Biden publicly said that Pelosi’s trip was “a bad idea” and that the military was against it.

Pelosi subsequently said that she hadn’t spoken to Biden about the trip but that the military may have been concerned that China might try to shoot down her plane.

Hu Xijin, the former editor-in-chief of the communist regime’s mouthpiece media, the Global Times, stated on July 29 that the Chinese military “has the right to” deploy tactical obstructions and fire warning shots at Pelosi’s plane if it’s accompanied by U.S. fighter jets, should the House speaker visit.

“If ineffective, then shoot them down,” Hu said.

Chinese leader Xi Jinping issued a veiled threat to Biden during a phone call last week, warning that the United States is “playing with fire” on the Taiwan issue.

U.S. lawmakers have been rallying behind Pelosi over her possible visit.

Rep. Michael McCaul (R-Texas), the ranking Republican on the House Foreign Affairs Committee, told NBC News on July 27 that he and Rep. Gregory Meeks (D-N.Y.) were both invited by the speaker’s office to take part in her trip.

“Any member that wants to go, should. It shows political deterrence to President Xi,” McCaul told the news outlet. “But she should also pay attention to the military if it’s going to cause a blowback and escalate things.”

Rep. Jim McGovern (D-Mass.) told NBC, “Nobody should not go someplace because the Chinese government—which is guilty of genocide—is speaking in threatening terms.”

The United States doesn’t have formal diplomatic relations with Taiwan but maintains a robust informal relationship with the island under the Taiwan Relations Act, which provides it with weapons necessary for its self-defense. Washington also maintains a doctrine of “strategic ambiguity,” in which it will neither confirm nor deny whether it would defend Taiwan in the event of a Chinese invasion.

Chieh Chung, a military expert and a research fellow at Taiwan’s Association of Strategic Foresight, told The Epoch Times on July 25 that he doesn’t believe the Chinese regime would take military action against Pelosi should she visit.

“Once [China’s air force] warplanes approach our airspace, [Taiwan’s] air force will take action immediately. We even will fire missiles to stop the warplanes. This will cause a military conflict,” Chieh said. “I don’t think mainland China will do this.”

Military analysts have also speculated about whether China would invade Taiwan this year.

Russia’s invasion of Ukraine likely put the West on high alert—a fact that should deter the CCP from invading, Eric Chan, a senior strategist at the U.S. Air Force, said during a March panel hosted by the Global Taiwan Institute.

“[The CCP knows] the U.S. and Europe [are] now certainly more on edge, and they are going to be watching for things like a repeat of 2014,” Chan said at the virtual event, referring to Russia’s annexation of Crimea in 2014.

Therefore, the CCP is unlikely to perceive an invasion of Taiwan—or what he foresaw in 2021 as a “limited invasion” of Kinmen, a cluster of Taiwanese islands close to China’s southeast coast—as viable now, he added.

China is unlikely to invade Taiwan in the fall of 2022, according to a March 24 legislative briefing by Taiwan’s National Security Bureau (NSB) Director-General Chen Ming-tong. He cited several reasons for his assessment, including the upcoming 20th Congress, the Ukraine war, China’s COVID-19 resurgence, and China’s economic challenges.

The CCP “has never ruled out taking over Taiwan by force, but it’s the political timing that’s in question,” Chen said, adding that there are “no concerns” that China would invade “within President Tsai Ing-wen’s term of office.”

Nonetheless, the director warned that “Beijing is thinking more about the legitimacy of launching a war, and how it should prepare to launch a war.”

“Therefore, if Beijing makes a move, the move will be comprehensive,” Chen said.

Nicole Hao and Andrew Thornebrooke contributed to this report.