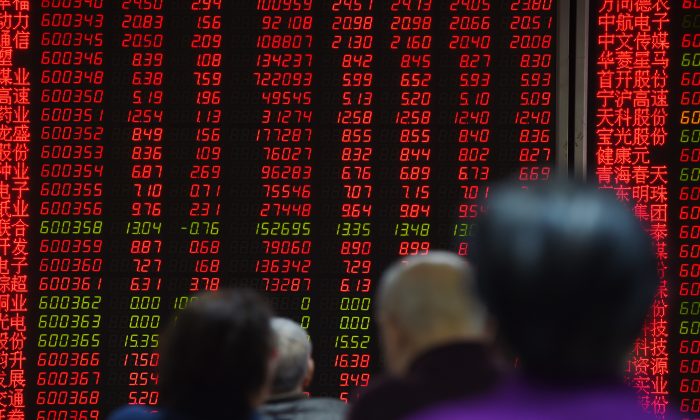 Beijing has cracked down on domestic insurers, suppressing the industry over what regulators have recently deemed speculative investments. The move hurt insurance stocks, driving down the Shanghai Composite Index 3 percent in the week ended Dec. 15.

It’s a move that further cements China’s “Wild West” business reputation: the landscape is mostly lawless, but you never know who will ride into town to spoil the party.

Chen Wenhui, vice-chairman of the China Insurance Regulatory Commission (CIRC) announced stricter regulations over the industry on Dec. 13, including lowering the ratios of equity to be held, and barring insurance companies from using insurance deposits to fund equity purchases.

Beijing has been closely monitoring insurance companies’ activities for months. Their highly leveraged asset purchases are risky and if stock prices fall, their fortunes could quickly unravel.

But the timing and nature of the crack down is intriguing. For one, Beijing has been attempting to restrict the outflow of cash, and insurance companies have been a major agent of foreign asset acquisitions in the last twelve months. At the same time, CIRC’s investigation into two specific insurers may be driven by an entirely different motive.

Chinese insurance companies are flush with cash from selling so-called “universal life” products, a high-yielding hybrid product combining death benefit and investments. Foresea’s “universal life” products, for example, promise returns of between 4 to 8 percent. To fund the high returns, insurance companies have been leveraging up to purchase assets both within China and abroad.

As an industry, insurance has been a major driver of foreign acquisitions. Anbang Life is at the forefront of such purchases. Anbang made headlines last year for purchasing New York’s Waldorf-Astoria hotel for nearly $2 billion. Earlier this year, it bought Strategic Hotels & Resorts from Blackstone Group for $6.5 billion, and most recently, Anbang has been in negotiations to purchase around $2.3 billion of Japanese residential real estate assets, also from Blackstone. Anbang’s biggest gambit this year was its failed $14 billion bid to acquire Starwood Hotels & Resorts Worldwide.

The timing and nature of the crack down is intriguing.

Outside of general restrictions on insurers’ activities, CIRC’s crackdown on Evergrande and Foresea are the most severe.

Regulators barred Foresea from issuing “universal life” policies which made up almost 90 percent of the firm’s premiums. Foresea has used such premiums in recent months to increase its ownership in a number of high-profile Chinese companies.

CIRC also banned Evergrande Life, the insurance unit of major property developer China Evergrande Group, from investing in equity securities. In an announcement on its website, CIRC said Evergrande’s “asset allocation plan is not clear, and its capital funding operations are not standardized.”

Beijing’s decision to intervene in Foresea and Evergrande is interesting, given that the two insurance giants are both major shareholders of China Vanke, a major residential real estate developer. Evergrande and Baoneng both own major stakes in other Chinese companies, but Vanke is the most public and well-known.

Baoneng—through Foresea and several other subsidiary insurers—is Vanke’s biggest shareholder and has been locked in a protracted dispute to wrest control of the company from Vanke founder and CEO Wang Shi, one of China’s best-known and earliest entrepreneurs.

Last week, CIRC criticized the entire domestic insurance industry, calling its recent investments into other Chinese companies “barbaric.” The tone and characterization is similar to Wang Shi’s portrayal earlier this year of Baoneng as “barbarian,” a reference to the book “Barbarians at the Gate” about the 1988 hostile takeover of RJR Nabisco by private equity giant Kohlberg Kravis Roberts & Co.

Evergrande is another top shareholder in Vanke and has been building up its shares quickly over the last few months. Its intentions so far are unclear, but Evergrande’s parent is poised to overtake Vanke as China’s biggest residential developer in 2016.

Both companies could demand board seats at Vanke’s shareholder meetings in March 2017, which could determine the fate of Wang Shi.

And here’s where Beijing steps in as Wang’s white knight. Wang is a celebrity with a rock star-like reputation, and one of China’s first-generation entrepreneurs who is synonymous with the rise of Shenzhen as a business hub. Since founding the company in 1984, Wang carefully managed his relationship with local and regional Communist party organs. Vanke largely followed party blueprints to develop and build homes and apartments across China during the real estate boom, and is said to have a wealth of Communist Party connections.

To Western observers, the Vanke takeover battle seems routine. Activist investors such as Carl Icahn and Daniel Loeb shaking up corporate boards is commonplace in the United States. But the showdown over Vanke is a rarity in the Chinese markets, where the ruling Communist Party craves stability and control above all.

In recent years, regulators have increased rhetoric about letting free-market forces play a more decisive role in shaping the country’s financial markets. Analysts had been wondering how the Chinese regime would handle a possible downfall of one of China’s most successful businessman, which will reveal much about its market intentions.

It looks like we have our answer—CIRC’s crackdown on Vanke’s top shareholders will likely stop Baoneng and Evergrande’s further advance.