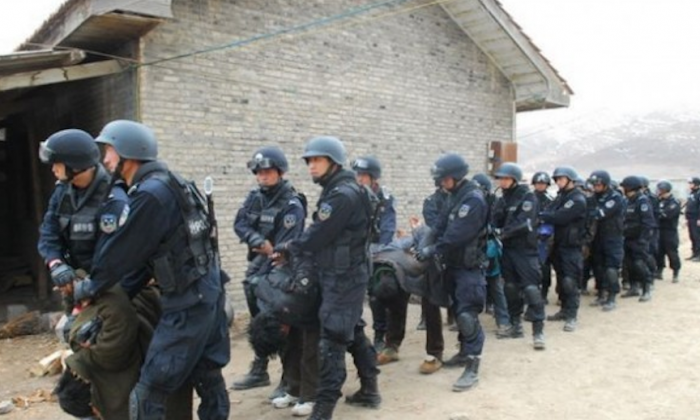 Tibetans are forced to bow down as they are taken away by Chinese security forces in 2011. Tibetan writers and artists are being targeted for arrest in China's latest crackdown. (From an Chinese online military forum)
China

China Clamps Down Harder on Tibetan Writers and Singers

Singers Trinley Tsekar and Gonpo Tenzin were detained late in November. Both men are from Driru (Biru) County, where the CCP has been implementing a highly unpopular campaign to force Tibetans to display loyalty to China and fly the Chinese flag from their rooftops.

Both singers had released and distributed DVDs with lyrics on Tibetan culture, literature and language, and the pains of the Tibetan people under the rule of the Chinese, said the Tibetan Center for Human Rights and Democracy (TCHRD).

The arrest of the singers follows the recent arrests of Tibetan writers.

Tobden, 30, a nomad and writer who was arrested on Oct. 28, was sentenced to a five-year term on Nov. 30, along with two other residents of Shakchu township in Driru county.

Tobden’s writings on the suffering of Driru’s people and calling for the world to “urge justice for the county’s residents, who suffer under unjust laws and regulations,” are judged by the CCP to be threatening, a source told Radio Free Asia.

Earlier in October, Chinese police detained popular writer Tsultrim Gyaltsen,27, and a friend, charging them with “allegedly engaging in activities to destroy social stability and for splitting the Chinese motherland,” a source told The Tibet Post International (TPI).

Since this spring, at least seven other Tibetan writers or musicians have been either jailed or sentenced, including two who were “disappeared” and later found to be in detention.

The CCP says its “mass line” campaign in Tibet is meant to bring the Party officials closer to the people. The reality of the campaign, says the Tibetan Center for Human Rights and Democracy, “is the policy is aimed at bringing every Tibetan under the direct surveillance of the party’s human and technological surveillance machinery.”

On November 1, the CCP’s top-ranking official in the Tibet region, Chen Quanguo, wrote in an editorial in Party policy journal Qiushi that he would “ensure that the voices of hostile forces and the Dalai group are not seen or heard.”

He pledged that local officials would “make sure that the voice of the party is heard and seen everywhere in this vast 120 million square kilometer region.”

Recently released China Law Yearbook 2013, an official Party publication, states “[We must] resolutely fight the crimes of splittism, subversion, terrorism and all kinds of cult organizations in accordance with the law to maintain state security and social and political stability, consolidate the party’s ruling position, and defend the socialist regime.”

Any writer, artist, musician, blogger, or religious figure who articulates or expresses any term or example of Tibetan culture is considered a “splittist,” a threat to the CCP, and is thus severely punished.

“By daring to refute China’s official narrative of events surrounding the 2008 Tibetan uprising, these courageous Tibetans represent a significant new challenge to the Chinese authorities,” said Tsering Tsomo, the director of the TCHRD, regarding the targeted writers and singers.