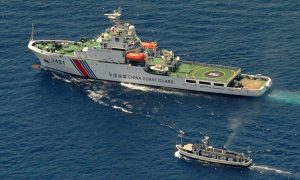 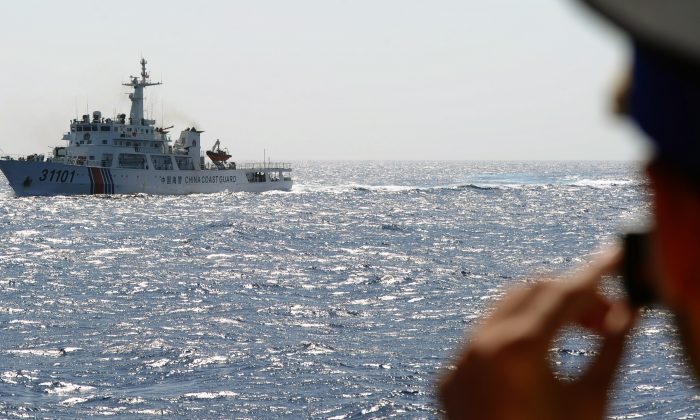 A Vietnamese coast guard officer takes a picture of a China Coast Guard ship in the South China Sea on May 14, 2014, off Vietnam's central coast. The Chinese regime is now defending airspace over the region. (Hoang Dinh Nam/AFP/Getty Images)
China

The Chinese regime is chasing away foreign aircraft over the islands it built in the South China Sea. On Thursday, its Foreign Ministry spokeswoman Hua Chunying declared “China is entitled” to establish air defense zones.

The new developments are what many defense analysts feared would happen. The Chinese Communist Party is currently building military bases and runways on islands, which it also built, in the South China Sea and experts are concerned what the developments mean for freedom of passage in the region.

By defending airspace over the islands, the Chinese regime is taking the conflict to a new level. It is enforcing rights over land that it created in disputed waters close to 1,000 miles from its southernmost point in Hainan.

The Chinese regime declared an Air Defense Identification Zone (ADIZ) over the East China Sea and islands controlled by Japan in November 2013. It stated it would defend the area militarily and demanded that other nations ask permission when passing through.

Recent developments in the South China Sea suggest the Chinese regime is on the brink of a similar move.

“China is entitled to set up ADIZs,” declared its Foreign Ministry spokeswoman Hua Chunying on Thursday, according to Bloomberg.

She added, “A decision in this regard depends on whether the air safety is threatened and to what extent it is threatened.”

Hua’s statements sound a lot like what defense experts were concerned of of. Dr. Andrew S. Erickson, an associate professor in the Strategic Research Department at the U.S. Naval War College, warned last week that the Chinese regime may use its new islands to “support” an ADIZ in the South China Sea.

Admiral Samuel Locklear, commander of the U.S. Pacific Command, similarly warned that along with an ADIZ, the Chinese regime’s developments “could eventually lead to the deployment of things, such as long-range radars, military and advanced missile systems.”

The Chinese regime has already begun defending the airspace above its self-made islands. Reuters reported on May 8 that seven Philippine patrol planes have been warned by the Chinese regime to stay away, when flying over the Spratly islands in the South China Sea.

Even if other nations do not recognize the air defense zone, it gives the Chinese regime a legal basis to keep military jets and ships in the region and to harass foreign planes traveling through.

The overall strategy is a clear example of legal warfare, also called “lawfare,” where a country uses international law for military strategy.

The specific strategy the Chinese regime uses in its territorial claims is its “Three Warfares.” It includes legal warfare, psychological warfare to make foreign militaries lose the will to fight, and media warfare to sway public opinion in its favor

The Heritage Foundation noted the beginnings of this strategy on May 21, 2012. It stated the Chinese regime was manipulating the U.N. Convention on the Law of the Sea (UNCLOS), in order to claim territory in the South China Sea.

“There is little question that the Chinese are trying to use UNCLOS to restrict U.S. naval operations at a time when the Chinese navy does not yet have the wherewithal to do so directly,” it stated.

At the same time, it added, the Chinese regime is not playing by the rules. “In the ongoing confrontation with the Philippines over islands and shoals in the South China Sea,” it states, “China has refused to submit to UNCLOS arbitration, although both Manila and Beijing are signatories.”

The situation we’re now witnessing is another stage in what experts predicted.