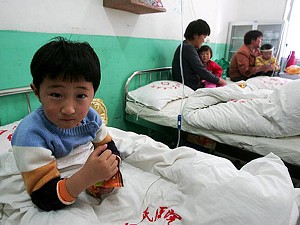 A young girl suffering from the hand, foot and mouth disease caused by the enterovirus 71, undergoes treatment in a hospital in Fuyang of Anhui Province, China. (China Photos/Getty Images)
China

BEIJING—An outbreak of a virus that has killed dozens of children across China may be yet to reach its peak, the World Health Organisation (WHO) said on Monday.

Health authorities in China have been battling to contain EV71, an intestinal virus that has killed 22 children in Fuyang, a city in China's eastern Anhui province, and caused at least two deaths in southern Guangdong province.

EV71 has also been traced in outbreaks of hand, foot and mouth disease (HFMD) in Hunan, Jiangsu and Zhejiang provinces, that have infected thousands of children across China.

HFMD is a common disease in children and infants and outbreaks regularly occur in China without deaths.

But HFMD caused by EV71 can cause viral meningitis and deaths, according to the U.S. National Centre for Infectious Diseases.

At least two other children have died of HFMD, but authorities have not confirmed any link to the EV71 virus.

There is no vaccine or antiviral agent available to treat EV71, a non-polio enterovirus which is spread mostly through contact with infected blisters or faeces and can cause high fever, paralysis and swelling of the brain.

“I don't see that this in any way should affect the Olympic Games,” WHO China representative Hans Troedsson told Reuters. “I think we will see the peak before the Olympics and I don't foresee that it will be a problem at all.”

The EV71 virus had killed children in Anhui in early March, but a delay in reporting the outbreak to the public until last weekend triggered criticism in the media, which said local government officials should be sacked.

A total of 12 children remain in critical condition, and more than 600 are in hospital in Fuyang alone, some with damaged brains, hearts and lungs, the China Daily said.

China has since issued a nationwide alert in a bid to control the virus, closing kindergartens and sending officials to visit nurseries and primary schools and educate staff on hygiene and prevention.

Troedsson said the latest figures he had received suggested new infections were slowing, but it was too early to say whether the worst had past with the disease's peak months looming.

“We don't know if there will be another peak coming up as we have May , June and July ahead of us. Whether we are actually seeing the peak and it is going down, that is too early to predict yet,” Troedsson said.

But better reporting and prevention efforts sparked by the health ministry's alert would help.

“I don't think there will be a non-controlled epidemic,” Troedsson said.