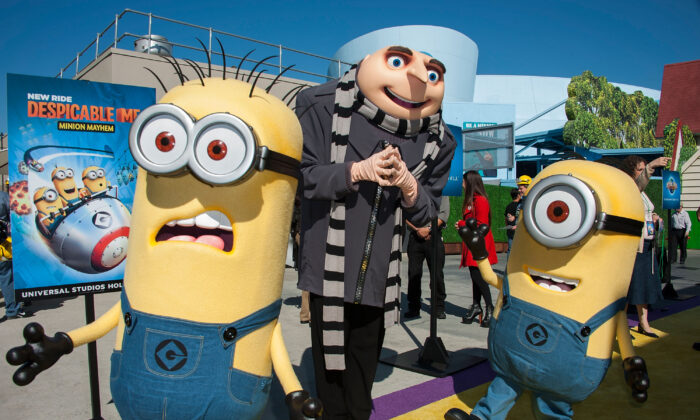 China’s vast censorship efforts are under scrutiny again, after it was revealed on social media that the Chinese version of the new children’s film “Minions: The Rise of Gru” featured an altered ending that supported the communist regime’s policies.

While the global version of the film ends with two anti-heroes riding into the sunset after a heist, the Chinese version ends with one character going to prison for 20 years and the other renouncing his evil ways. The latter then dedicates his life to raising three children, in an apparent reference to Chinese Communist Party (CCP) leader Xi Jinping’s three-child policy.

During an interview with NTD, a sister media outlet of The Epoch Times, long-time Hollywood executive and “Feeding the Dragon” author Chris Fenton said that it was not clear if the censored ending was created by the film’s Chinese distributor or Universal Pictures.

In either event, Fenton said, Universal would likely have had little incentive to go against the wishes of the CCP.

“As far as Universal Studios is concerned, if they want to have that movie released [in China], they have no choice but to comply,” Fenton said.

Fenton said there were likely two overriding motivations driving Universal to comply with the censorship. The first is a desire for access to the Chinese box office. The second is its newly opened Universal Studios theme park in Beijing. NBCUniversal’s Universal Parks & Resorts holds a minority 30 percent stake in the park, while five state-run companies own the remaining 70 percent majority through the Beijing Shouhuan Cultural Tourism Investment Company.

Despite the effort to turn the film into communist propaganda, Fenton said there was a silver lining to the incident insofar as the edits were only made to the Chinese release of the film and that the regime had not successfully encouraged such alterations to the global release.

“We’re noticing that some of these edits just to get a movie into China are basically just for China, which is a positive,” Fenton said. “I’m not feeling like Hollywood is necessarily censoring itself after a movie is made in order to please Chinese censors for the worldwide cut of the movies. It’s being done just for the domestic cut.”

“That said, there’s still a lot of premeditated censorship in Hollywood, in terms of sensitive items that they know China is going to have problems with and possibly blackball not only the studio, but all the individuals involved with the film to begin with.”

Hollywood Caters to the CCP

To that end, Fenton said that Hollywood executives had long catered to the whims of the CCP in pursuit of the expansive Chinese market. Now, he said, the CCP is closing its jaws around those companies operating in the country, taking their ideas and funding to prop up Chinese competitors.

“A lot of people like myself were embarking on this U.S.-China collaborative business model because we thought we were getting our products and services from the United States into a market that was normally closed off to them,” Fenton said.

“We really created our own worst enemies over there,” Fenton said. “And on top of it, we really mitigated our beliefs, our principles, our values, the things that made us Americans and made us part of the democratic world in order to get that access. And I think a lot of us now are regretting it.”

Fenton said that the risk and reward calculus for Western businesses operating in China is changing, underscoring that China is unlikely to open itself back up any time soon. Under Xi’s rule, he said, Western companies, particularly in cultural industries such as film, are increasingly being required to submit to the whims of the Party.

“[Xi] is ruling that country with an iron fist,” Fenton said. “There’s a lot of resentment around the world towards him and his government and that is causing them to retreat even further.”

“I just don’t simply see an opening occur that’s going to make things better for Hollywood nor really any industry that’s trying to gain access to that market without doing some serious kowtowing to that government.”