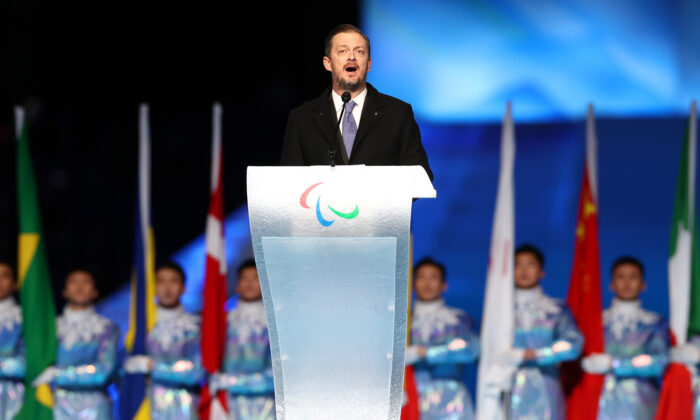 Andrew Parsons, President of IPC, makes a speech during the Opening Ceremony of the Beijing 2022 Winter Paralympics at the Beijing National Stadium in Beijing, China, on March 4, 2022. (Ryan Pierse/Getty Images)
Chinese Regime

During the opening ceremony of the Winter Paralympics in Beijing, China’s state-run broadcaster CCTV censored the remarks of Andrew Parsons, president of the International Paralympic Committee (IPC), in which he denounced Russia’s invasion of Ukraine and said that he is “horrified at what is taking place in the world right now.”

“Tonight I want—I must—begin with a message of peace,” Parsons said before athletes and spectators at Beijing’s Birds Nest stadium on March 4. “The 21st century is a time for dialogue and diplomacy, not war and hate.”

The act of censorship was in line with other efforts by Beijing to suppress voices in support of Ukraine or critical of Russia’s attack. The Chinese communist regime, which maintains close ties with Moscow, has refused to denounce Russia’s aggression nor call its actions an “invasion.”

On Friday, the Chinese broadcaster of the English Premier League also canceled the airing of all matches over the weekend due to the league’s planned displays of solidarity for Ukraine during the games.

Parsons’s condemnation of Russian President Vladimir Putin’s aggression came just a day after the IPC’s announcement on Thursday that Russian and Belarusian athletes could not take part in the Paralympics, a reversal of a decision the IPC had taken only hours before in favor of their participation.

Explaining the reversal, Parsons described having met with a wave of revulsion and protest over what Russia is doing in Ukraine.

“In the last 12 hours, an overwhelming number of our members have been in touch with us, and have been very open, for which I’m grateful. They have told us that if we do not reconsider our decision, it is now likely to have grave consequences for the Beijing 2022 Paralympic Winter Games. Multiple national paralympic committees, some of which have been contacted by their governments, teams, and athletes, are expressing their intention not to compete,” Parsons said.

“Ensuring the safety and security of athletes is of paramount importance to us, and the situation in the athletes’ village has escalated and has now become untenable. With this in mind, and in order to preserve the integrity of these games and the safety of all participants, we have decided to refuse the athlete entries from [Russia and Belarus],” Parsons continued.

After apologizing to the athletes affected by this reversal, Parsons said they were victims of the decisions their own government took in invading Ukraine.

The Russian Paralympic Committee criticized the IPC’s change of course as “absolutely politicized.”