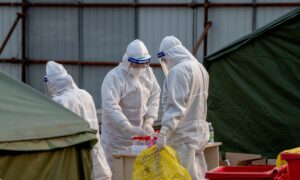 China Carries Out 90 Percent of Executions in World, Says Report

The 2006 Annual Report of Italy's Hands Off Cain stated that China tops the standing as the country where the vast majority of the world's executions took place. The verified number of executions that took place in China 2006 was at least 5,000, while the world total was 5,628. China executed almost nine times as many criminals as any other country.

About 15,000 criminals were put to death per year in China during the 1990s. According to Chinese officials cited by the report, the number of executions dropped in the past two years due to Beijing being awarded the 2008 Olympic Games and to international pressure.

Reuters reported that death sentences in China dropped significantly this year because of reforms giving the Supreme People's Court exclusive powers of review and confirmation of death sentences, which has made lower courts more prudent in handing down capital condemnations. The report cited Chinese officials as saying that death sentences handed down by Chinese courts were at a ten-year low in 2006.

Liu Qing said in the report, “Compared with China under Mao Zedong, the present number of people executed is comparatively smaller. Yet the oppressive nature of the communist dictatorship remains unaltered. As an authoritarian state, China still rules by terrorizing its people with military force. Severe punishment or even killing is employed to maintain legality of its rule. Therefore, the current situation does not ensure us that China will not launch another massacre. It simply depends on whether Chinese leadership regards it necessary or not.”

Many legal experts even in China have called for a decrease in death sentences as well as abolition of criminal laws that lead to capital punishment. Yang Zaixin, a lawyer in Guangxi Province, has stated that death sentences and executions should be greatly decreased.

“Because human lives are very precious, no money or posthumous awards can compensate for loss of lives. If the number of death sentences could be reduced, timely correction could be made to wrongly judged cases, and more human rights protection could be granted. Consequently, support a decrease in death penalty sentences,” stated Yang Zaixin.

Liu Qing thinks that since establishment of the Chinese communist regime, capital punishment has been more commonly practiced.

“Chinese emperors of old,” continued Liu Qing, “would declare a general amnesty for all offenders after they seized the power. They showed a placatory gesture toward opponents, and won control over the state through conciliation. The emperor restored the whole society to a restful state by giving his people favor, tolerance, and convenience. But Mao Zedong took the opposite approach. Since establishment of the communist government, Mao had adopted policies of more severity and terror.”

An increasing number of death sentences, Yang Zaixin emphasized, did not help diminish rising crime or stabilize the society, though authorities considered such severe law a must in a turbulent society.

“Qin Shi Huang, the first emperor of China and a notorious dictator of Chinese history, ended up being overthrown by a grass roots rebellion. The key to social stability is social justice, not the number of people condemned to death. Violence cannot restore social order either,” concluded Yang Zaixin.

In fact, the number of death sentences and executions is kept as a state secret in China. In estimation, the number of yearly executions in China ranges from 5,000 to 12,000. The approval of an amendment, requiring that all death sentences receive confirmation from China's Supreme Court has succeeded in decreasing the number of executions. Nevertheless, with its unchanged system, as Liu Qing expressed, nothing can be done to stop China from abusing the right of employing capital punishment.