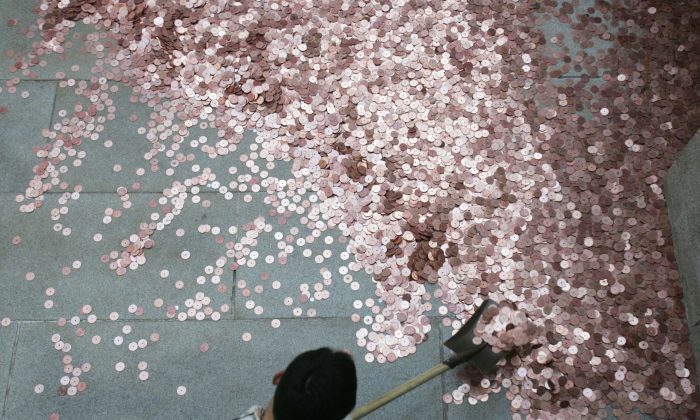 A worker gathers coins thrown by tourists into a well to pray for good luck and wealth during celebration for Chinese New Year at White Cloud Temple in Beijing on Feb. 18, 2007. China's foreign exchange reserves are disappearing as fast as the coins. (China Photos/Getty Images)
Business & Economy

China Capital Outflows Are Back, Some Funnier Than Others

While Chinese capital flows dominated headlines earlier this year, they have not garnered much attention since the end of February.

But as the yuan is slipping again against the dollar, outflows are back in May and the People’s Bank of China’s (PBOC) stash of foreign reserves declined as well (down $28 billion to $3,192 trillion).

Most of this was due to the so-called valuation effect, which decreases the value of assets in currencies other than the dollar as the dollar rises in international markets.

However, research firm Capital Economics estimates Chinese still moved around $30 billion out of the country. “An increase in outflows would seem to make sense given the weakening of the renminbi against the dollar last month,” the firm writes in a note to clients.

Looking at actual transactions happening on the ground, it seems Chinese are still quite desperate to move their money out or to safety. They are overpaying for bitcoin and are loading up on gold for example.

Other go the traditional route, like this Chinese man, who tried to smuggle $74,000 worth of U.S. dollar bills out of the country to Hong Kong on June 3, according to the South China Morning Post. The legal limit is $5,000.

While being perfectly legal and in accordance with PBOC rules—Suning got approval for the acquisition—it is nonetheless unclear what value added there is for a home appliance retailer to own a soccer club. As long as the cash it out of the country, this does not seem to matter, though.

For Suning President Zhang Jindong, the move is still strategic: “The acquisition of Inter is a strategic move. Ours is an international business and our brand will soon be big in Europe too.”

Despite these seemingly desperate measures of Chinese citizens and companies to get out of the yuan and into relative safety, Capital Economics is optimistic we won’t see a repeat of last year’s currency crisis. It began with a surprise devaluation of the yuan in August, the biggest risk factor being a Fed rate hike next week.

“Depreciation expectations remain much more manageable than in late-2015 and early-2016 when China was witnessing outflows of over $120 billion per month. But rate hikes by the Fed are likely to be back on the agenda soon and, when that happens, there is a good chance that outflows could pick up again.”