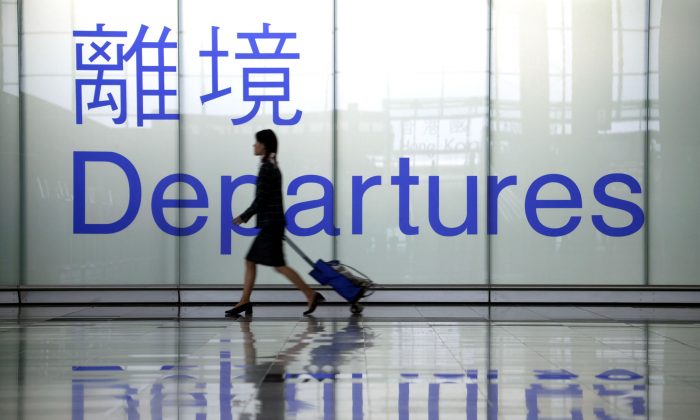 China Capital Outflows Are a Vote of No Confidence in Economy

The Chinese currency, the yuan, is a strange animal. Linked to the U.S. dollar, it hardly moves—but when it does, financial markets get jittery, especially when it’s going down.

The yuan lost 1.1 percent against the dollar in October, which doesn’t seem like a lot. It’s what’s behind the one percent loss that has markets on edge.

According to investment bank Goldman Sachs, as much as $500 billion in capital has left China this year through September. Chinese companies and citizens, as well as foreigners, convert their yuan holdings into dollars and other foreign currencies, pushing the price of the yuan down. Outflows picked up especially in September, reaching $78 billion.

If there is no additional demand for the yuan from trade, for example, the price of the currency has to move down to adjust for the imbalance in the demand for foreign currency. Fundamentally, this is a vote of no confidence in the Chinese economy. If the risks and returns of Chinese assets were favorable—as they were for most of the past decade—capital would be flowing into China and not out.

However, the Chinese leadership wants to limit the visibility of this vote of no confidence and give the impression of financial stability, so it is applying two levers to obscure the move.

First, it is selling off its once mighty stash of official foreign currency reserves, down from $3.33 trillion in January to $3.17 trillion at the end of September. In August 2014, it was close to $4 trillion.

It is simply a transfer of public Chinese foreign exchange assets to private hands, through global financial markets. If the amounts of foreign currency bought by the private sector and sold by the official sector match, the impact on the price of the currency is limited.

For example, Chinese official holdings of U.S. Treasury bonds were down from $1.25 trillion at the beginning of the year to $1.19 trillion at the end of August. However, Chinese corporations have either completed or announced $218.8 billion in mergers and acquisitions of foreign companies this year, according to Bloomberg data.

The rest of the record corporate buying spree was financed by Chinese state banks and other foreign exchange reserves held at the People’s Bank of China (PBOC).

Chinese companies have previously invested in steel mills and coal mines like there is no tomorrow. However, because mining and manufacturing have massive overcapacity and debt issues, Chinese companies are looking overseas for better investments.

But it’s not only Chinese corporations that are suddenly discovering the value of foreign assets. Chinese citizens have also been active buyers of foreign real estate and stocks. Purchases of equities traded on the Hong Kong stock exchange by mainland citizens, for example, hit a record high of $12 billion in buy orders in September, up 64 percent from August.

So the Chinese regime is pulling the second lever to limit outflows: capital controls. Transfers of capital for citizens are already capped at $50,000 per year, so people have found handy ways around this limit. One is buying millions worth of life insurance products—a form of capital investment—in Hong Kong using their UnionPay debit cards. But not anymore.

The regime also continues to crack down on underground banks that facilitate capital outflows. According to reports by mainland paper Financial News, the State Administration of Foreign Exchange (SAFE) seized $8.4 billion in foreign exchange funds during an investigation in late October.

So unlike the mostly state-owned companies, which are snapping up foreign assets with the blessing of the regime, Chinese citizens have to find other ways to reduce their exposure to the Chinese economy. They are fed up with the low interest rates on bank deposits and are increasingly afraid of the risks of unregulated wealth management products.

One channel that still seems to work is the flow of yuan from the mainland to offshore centers like Hong Kong and Singapore. Goldman estimates $45 billion out of the $78 billion in September outflows was transferred from the mainland banking market to the offshore yuan market, where it was likely converted into foreign currency.

The offshore yuan (CNH) has lost 4.8 percent against the Hong Kong dollar since May, whereas its domestic counterpart (CNY) only lost 4 percent, indicating more selling pressure on the offshore yuan.

Another vehicle, mostly used when all else fails, is the electronic currency Bitcoin. After moving sideways for most of the summer, the price has skyrocketed since late September, coinciding with the latest measures to restrict capital outflows and the drop in the yuan. Alas, it is a bit more volatile than its official counterpart. It’s up 23 percent to $705 since Sept. 25, without regime meddling and for everyone to see.