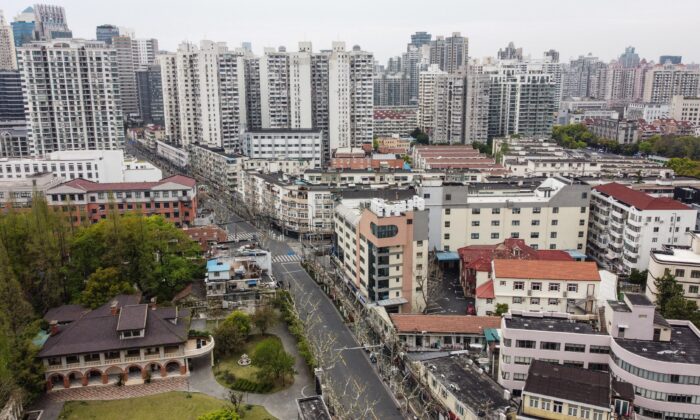 An aerial view of a residential area is seen during the second stage of a pandemic lockdown in Jing'an district in Shanghai on April 5, 2022. (Hector Retamal/AFP via Getty Images)
Thinking About China

The COVID-19 lockdowns in Shanghai seem like an impressive display of the Chinese Communist Party’s (CCP) power. But authorities are doubling down on the bad policy, which shows that they’ll have supply and morale problems during any potential war.

The regime is trying to fight COVID-19 with draconian lockdowns. They’ve shut down key sectors such as the technology hub of Shenzhen and the financial hub of Shanghai. That city has always been more open to the West because of its extensive presence of foreign diplomats. During World War II, Shanghai witnessed prolonged conflict between China and Japan.

But now, the West is witnessing the CCP lose its war against COVID-19. The regime’s failures in the fight against the pandemic suggest that it can’t fight an actual war.

The first problem is that the CCP decided to double down on the bad policy. Most Americans fret over the superior power of a dictatorship. While democracies seem to be hopelessly fractured and forever fighting, a dictatorship can make decisive decisions and sustain them longer, even when they don’t work.

This downside is seen clearly in Beijing’s policies. Most of the world has abandoned lockdowns because they haven’t stopped the spread of the virus. Death statistics of areas with no lockdown policies compared to locked-down areas show no difference. But there were also many opioid overdoses, suicides, mental illnesses, and domestic violence because of lockdowns.

In democracies, the people make their voices heard at every election. As a result, politicians—worried about keeping their jobs because of public discontent at overreaching government control—finally stop their bad policies.

But in a communist dictatorship, the subordinates must worry about their jobs if they dare tell their leaders the truth. During the early days of COVID-19, brave whistleblowers were suppressed for telling uncomfortable truths about the coronavirus. And this caused the situation to become much worse than it could have been.

It also meant that Beijing’s handling of the pandemic sent a message to junior officers and noncommissioned officers that honest opinions aren’t welcome if they could damage the CCP’s image. Even in peacetime, the Chinese people have died because of it.

The inability to listen to front-line individuals with direct knowledge of problems and the fondness for top-down, centralized planning that ignores criticism could hurt China in a potential conflict. Warfare is incredibly chaotic, and intelligence from the front lines is paramount.

The lockdowns in Shanghai have thrown the entire population into disarray. It was a government plan, and you would think the top authorities would have anticipated and prepared for the implications of their policies, such as shifting large amounts of food to its civilian population.

But none of that has happened. The citizens are trapped indoors, and the regime has provided inconsistent amounts of poor-quality food. Infected children are being separated from their parents, and citizens are begging authorities to let them search for food. Western observers, not censored by the regime, have reported that Chinese people are forced to scream for help and supplies from their balconies.

The wartime application should remind readers that a conflict is more than weapons systems and units being moved around like chess pieces. During wartime, moving food, fuel, and soldiers requires effort. And the CCP can’t even send food to a major city during a time of peace. The people, government, and military aren’t being bombed. They don’t face the chaos of war.

And yet even though CCP officials presumably knew their plan in advance, they failed to properly prepare for it. Like the Russian juggernaut often stalled due to lack of fuel, it’s tough to imagine China performing better in a war.

Moreover, the oppressive lockdowns can’t help CCP officials endear themselves to their own citizens. The people of Shanghai live under a brutal dictatorship. They’re often censored on social media, but Western analysts already tell us about their discontent.

Moreover, classical Chinese writing as far back as the Warring States period discusses the limitations of dictatorship. An authoritarian government can command bodies. They can lock people indoors, lock up tennis star Peng Shuai over a social media post, and oppress the Uyghurs. But they can’t win the hearts and minds of their people.

This means that the CCP is weaker than perceived by many Western analysts. Fewer people will volunteer for the military. If forcibly conscripted, they won’t fight hard. Civilians, even in a dictatorship, will protest against the government.

The people of Shanghai are forced to fight for food during a pandemic; they won’t be more motivated to storm fortified beaches under fire. They’re more likely to reject the CCP. And any potential warfare will only reveal the people’s mistrust of the Party.

Just like the revolts throughout Chinese history and the fall of the Soviet Union, the CCP will seem powerful until it isn’t, and it suddenly collapses. As Mao Zedong himself said when he was the revolutionary against a powerful government, “A single spark can start a prairie fire.”

The lockdown of Shanghai is horrible for the people stuck there. They’re the victims of an outdated policy that doesn’t work and a regime that doesn’t respond to the will of its people. But it shows how the CCP will be unable to supply its armies in war, and more importantly, it squanders the trust and allegiance of the people.