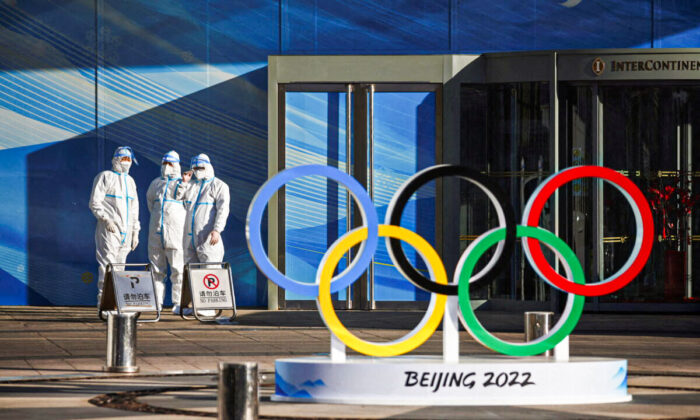 Workers in PPE stand next to the Olympic rings inside the closed loop area near the National Stadium, or the Bird's Nest, where the opening and closing ceremonies of Beijing 2022 Winter Olympics will be held, in Beijing, China, on Dec. 30, 2021. (Thomas Peter/Reuters)
Beijing 2022 Olympics

Beijing Olympic Organizers on Jan. 17 stopped selling tickets to the general public after the city reported its first case of the highly contagious Omicron variant of COVID-19.

Tickets will only be distributed to a selected group of spectators for the Winter Games taking place from Feb. 4, according to an announcement posted on the organizing committee’s website. Those spectators will need to “strictly abide by” authorities’ virus curbs to “help create an absolutely safe environment for the athletes,” the organizers said.

The halting of Olympic ticket sales confirmed expectations that the Beijing Olympics will have few onlookers even as the regime has deployed even stricter containment measures than those enacted in Tokyo last year to ensure the Games could go smoothly.

The patient in Beijing who contracted the Omicron strain of COVID-19 is a 26-year-old banker who has taken three doses of Chinese homegrown Sinovac-CoronaVac vaccines, according to Chinese health officials. More than 16,547 people in the city have been tested as of Monday.

Beijing authorities have publicized details of the woman’s whereabouts over the past month. In an announcement sent to locals’ phones, officials told anyone who might have crossed paths with her to “immediately report” to officials, warning of punishment for those concealing such information and letting the outbreak spread further.

Beijing had already limited the Games to domestic audiences only last September, under stringent COVID-19 prevention policies that have largely shut Chinese borders to international travelers.

While the Winter games won’t require athletes to be vaccinated, those who aren’t have to undergo 21 days of quarantine after arriving in Beijing. Participants of the Winter Olympics will be strictly isolated in a “closed-loop” bubble until they leave, and subject to daily testing. Masks are required at nearly all times.

The system also applies to local volunteers. Local traffic authorities have also designated special lanes for vehicles involved in the Games and advised the public to work from home during the two-month period when the competition convenes.

Beijing is one of a number of Chinese cities that have told residents to stay in place and avoid traveling ahead of the Chinese Lunar New Year, which coincides with the Beijing Olympics. Following the Omicron case’s emergence, the city is now requiring all those who visit Beijing to test for COVID-19 within three days of their arrival, in addition to presenting proof of a negative COVID-19 test taken no more than 48 hours prior.