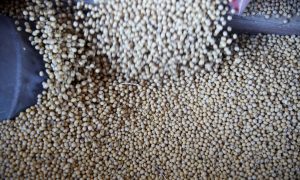 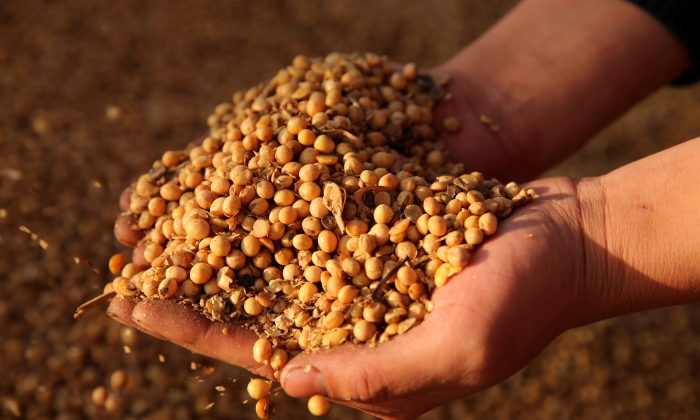 China Buys About 10 Cargos of US Soybeans After Trade Talks

CHICAGO—Chinese importers bought about 10 boatloads of U.S. soybeans on Sept. 23, following deputy-level trade talks in Washington last week that were overshadowed by the abrupt cancellation of a U.S. farm state visit by Chinese agriculture officials.

The deals for about 661,400 tons (600,000 metric tonnes) slated for shipment from Pacific Northwest export terminals from October to December, were similar in size to a wave of buying earlier this month, two traders with direct knowledge of the deals said.

Benchmark U.S. soybean futures on the Chicago Board of Trade jumped about 1.5 percent on news of the renewed buying, the market’s steepest rise since Chinese buyers bought a large volume of U.S. soybeans on Sept. 12.

Purchases of U.S. agricultural products such as soybeans, the most valuable U.S. farm export, and pork are seen as key to securing a deal to end a bilateral trade war between the United States and China that has lasted more than a year.

“We’re looking for a complete deal, not a partial deal,” Trump said during a joint press conference with Australian Prime Minister Scott Morrison at the White House on Sept. 20.

Trump said he was in no rush to make a trade deal before the 2020 election.

“I could leave lots out and have a deal very quickly, but we want to do it right.”

U.S. and Chinese officials have said since that deputy-level talks went well and plans for high-level talks next month remain on track.

Trump said his administration was “making a lot of progress” with China as Washington lifted tariffs on more than 400 Chinese products.

The Sept. 23 soybean deals were among the largest by private Chinese importers since Beijing raised import tariffs by 25 percent on U.S. soybeans in July 2018 in retaliation for U.S. duties on Chinese goods.

Other soybean purchases over the past year have been made almost exclusively by state-owned Chinese firms, which are exempted from the steep import tariffs.

For more than a year, the Trump administration has been negotiating with the Chinese regime, pressing it to reform a range of unfair trade practices, including intellectual property theft, forced technology transfer, and government subsidies for domestic companies.

Since May, tensions between the two countries have fluctuated following the Chinese regime backtracking on previous provisions negotiated over months of talks.

Both sides have since imposed tariffs on billions of dollars of each other’s goods, including a recent U.S. tariff of 15 percent on $300 billion of Chinese imports, covering a range of consumer goods.

By Karl Plume. Epoch Times reporter Cathy He contributed to this report.