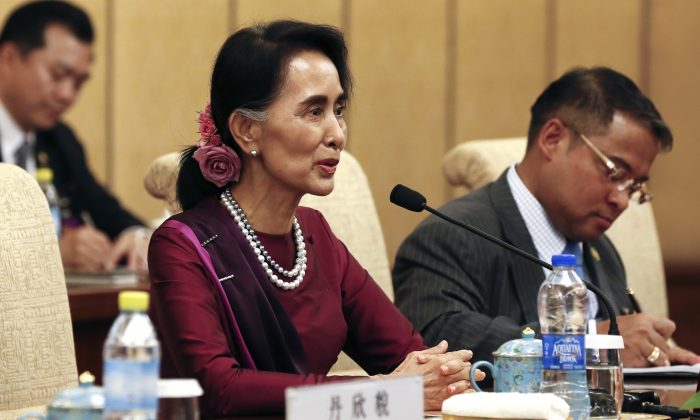 BEIJING—China and Burma/Myanmar said Saturday that they have pledged to forge closer ties as “blood brothers,” as Burma leader Aung San Suu Kyi got set to wrap up a visit to Beijing, her first diplomatic trip since taking power in March.

Minority Issues Key to US Sanctions on Burma

The neighboring countries also said in a joint statement that they would strengthen trade and cooperation on issues along the border, where fighting between Burma government forces and rebels have occasionally spilled over. There was no mention of progress, however, on a stalled $3.6 billion dam project in northern Burma primarily funded by Chinese energy interests, which was a key concern during the visit.

China has been on a diplomatic charm offensive in the past year toward its fast-growing neighbor, while Burma under Suu Kyi has shown a willingness to embrace its top trading partner and major investor.

The five-day visit, concluding Sunday, is the second trip to China within 15 months for Suu Kyi, who was imprisoned for more than a decade by Burma’s former Beijing-backed military junta.

Suu Kyi has indicated that she will seek more balanced relations with China and the United States compared to Burma’s previous government, headed by President Thein Sein, who initiated political reforms and built ties with Washington.