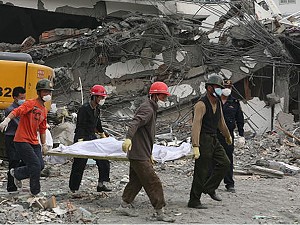 Rescuers carry a dead body past the debris of a collapsed houses on May 16, 2008 in Dujiangyan, one of the hard-hit cities, of Sichuan Province, China. (China Photos/Getty Images)
China

BEICHUAN, China—China struggled to bury its dead and help tens of thousands of injured and homeless on Friday when a powerful aftershock brought new havoc four days after an earthquake thought to have killed more than 50,000.

President Hu Jintao flew to the battered province of Sichuan and Premier Wen Jiabao said the quake damage could exceed the devastating 1976 tremor in the northeastern city of Tangshan that killed up to 300,000 people.

Wen called on officials to ensure social stability as frustration and exhaustion grew among survivors, many of whom lost everything and were living in tents or in the open air.

China put the death toll at just over 22,000 on Friday but has said it expects it to exceed 50,000. About 4.8 million people have lost their homes.

Thousands of men, women and children were heading by foot for Mianyang, a city near the epicentre, saying they were abandoning their ruined villages for good.

Anger has focused on the state of school buildings, many of which crumpled in Monday's 7.9 magnitude quake, burying thousands of children and prompting the Housing Ministry to order an investigation.

Hu and Wen stressed that searching for and rescuing survivors remained the top priority.

“We cannot talk about giving up too easily,” Wen said. “Life should go on. I believe people in the quake area can definitely build their hometown even better with their own hands. That is also the biggest consolation for the dead.”

The country is on precautionary alert against possible radiation leaks, according to government website seen on Friday.

The disaster area is home to China's chief nuclear weapons research lab in Mianyang, as well as several secretive atomic sites, but no nuclear power stations.

The disaster area is home to China's chief nuclear weapons research lab; China is on alert against radiation leaks

The Chinese Academy of Engineering Physics, also known as the Southwest Institute, in Mianyang is the primary design laboratory for Chinese nuclear weapons, according to www.globalsecurity.org.

A Western expert with knowledge of the Mianyang lab had said it was unlikely it was at serious risk.

As officials assessed the risk, thousands of residents from Beichuan, one of the areas worst hit by the quake, streamed down the road away from the town, carrying babies, bags and suitcases as they left in search of shelter.

The town was a scene of devastation, with virtually every building either demolished or damaged beyond habitation.

To the south, in the village of Houzhuang, residents said they were coping on their own, aid and troops yet to reach them.

“We ate some corn, but now we are suffering from diarrhoea after drinking water from the ditch for two days,” a resident said.

“We ate some corn, but we are suffering from diarrhoea after drinking water from the ditch for two days,” said one victim.

The aftershock, measuring 5.9 on the Richter scale, hit Lixian, to the west of the epicentre in Wenchuan, cutting off newly repaired roads and telecommunications.

“A number of vehicles were buried in landslides. The casualties were not known,” Xinhua news agency said, adding four of its reporters narrowly escaped death when a house collapsed.

China has mobilised 130,000 army and paramilitary troops to the disaster area, but with buckled and blocked roads, supplies and rescuers have struggled to reach the worst-hit areas.

Offers of help have also flooded in. The first foreign rescue team, a group of about 60 people from Japan, reached Sichuan on Friday. Rescue teams from Russia, Taiwan, South Korea and Singapore have also arrived in the province.

At China's request, the World Food Programme said it was sending enough ready-to-eat meals for 118,000 people.

Despite the growing death toll, rescuers were still finding survivors among the rubble.

A 50-year-old worker was rescued from a collapsed fertiliser plant after being trapped for about 100 hours, a witness said.

At least six people in Beichuan were rescued on Friday, including three school girls 87 hours after the tremor.

“Our child wasn't killed by the earthquake. She and the others were killed by a derelict building. The officials knew it was unsafe.” —Bi Kaiwei, whose daughter, 13, was killed.

Many raised questions about school construction. In Dujiangyan, a school collapse buried 900 students. In Wufu, nearly every building in the village withstood the quake but for a primary school, whose collapse killed about 300.

“Our child wasn't killed by the earthquake. She and the others were killed by a derelict building. The officials knew it was unsafe,” said Bi Kaiwei, whose daughter, 13, was killed.

Rescuers found two girls, one in a coma and the other dead, holding hands in the ruins of their school, Xinhua said.

Housing Minister Jiang Weixin said the schools weren't designed to withstand such a powerful earthquake, but added corruption was a possible cause.

“At this stage we cannot rule out the possibility that there has been shoddy work and inferior materials,” Jiang told a news conference in Beijing.

There were also concerns about epidemics if the dead were not soon buried or cremated.

“A lot of tourists have been killed. We don't know how to deal with the bodies, some of which have been highly decomposed, but their relatives will come to look for them,” an army officer in the badly hit Yinmugou resort in Pengzhou told Sichuan TV.

“I am really worried about epidemics,” he said.

Hundreds of damaged dams have also raised fears of collapse or flooding that could inundate towns and cities that are already struggling to recover from the quake.