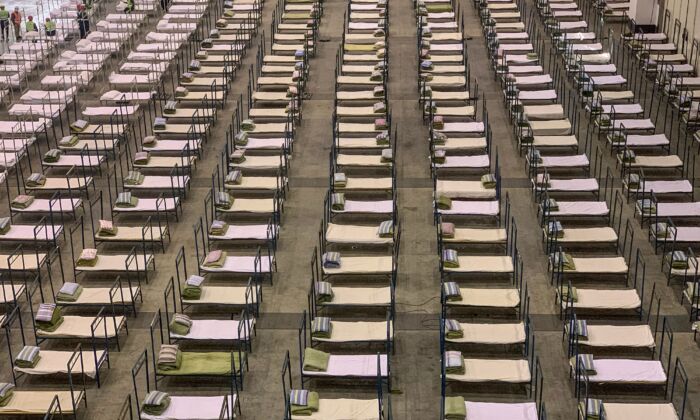 Workers set up beds at a mobile hospital in Wuhan, China, on Feb. 4, 2020. (STR/AFP via Getty Images)
CCP Virus

The central Chinese city of Wuhan has set up 11 new makeshift hospitals as of Feb. 5 in order to accommodate the large numbers of coronavirus patients.

Wuhan is the capital of Hubei Province. According to the provincial government-run media Hubei Daily, the 11 new facilities have a total capacity of 10,100 beds.

They are mostly set up within stadiums, exhibition centers, and school gyms within the city.

The city’s Wuhan Coronavirus Command Center released regulations on Feb. 5, explaining that coronavirus patients with mild or moderate symptoms would be sent to the makeshift hospitals.

Patients in severe condition or who are older than 65 would stay at the 14 hospitals and two newly-built hospitals designated for treating the coronavirus. Patients suspected of having coronavirus and some confirmed patients with mild symptoms will be isolated in community quarantine centers, most of which are hotels converted in response to the outbreak.

State-run media Xinhua reported that there are plans to build 12 more of such makeshift hospitals in Wuhan.

Commonly known in China as battlefield hospitals, these facilities are often used during wartime or natural disasters to efficiently care for the wounded and sick. Beds are arranged row by row in an open space.

State media revealed photos and videos of the facilities, which showed that the beds did not have any physical barriers separating them, save for several boards to wall off a group of about a dozen beds.

On Feb. 4, Chinese state-run media dismissed those claims, saying doctors would ensure it would not happen.

But Sean Lin, a U.S.-based expert in microbiology and former virology researcher for the U.S. Army, explained that such makeshift facilities should have been set up earlier in the response to the outbreak.

Lin said that in a situation where thousands are infected and many residents cannot get treatment due to overfilled hospitals, such venues could allow medical staff to take care of more patients efficiently.

For example, a nurse can distribute medicine more easily using a cart, delivering to dozens of patients within several minutes.

“But the Wuhan government is too late. It should have set up these hospitals before locking down the city”—a measure that indicates the disease had already spread widely and could not be contained, Lin said.

He added that medical staff should be alert about patients whose conditions are worsening, as they are likely to be more contagious due to active viruses in his body, which could potentially spread through bodily fluids, airborne particles, or stool.

“Once a patient’s condition turns to severe, medical staff must remove this patient to a designated hospital as soon as possible,” Lin said.

The Wuhan government first reported the outbreak on Dec. 31, 2019, though official data shows that authorities knew of a human-to-human transmission prior to that date. The virus has since spread all around China and to more than 20 other countries.