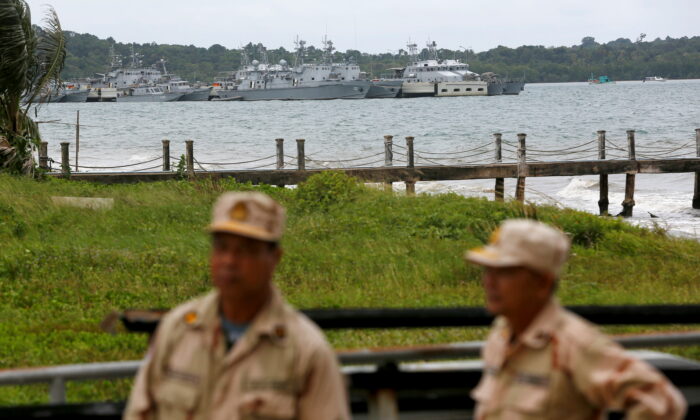 Sailors on guard at the Cambodian Ream Naval Base in Sihanoukville, Cambodia, on July 26, 2019. (Samrang Pring/Reuters)
China

China Building Naval Base in Cambodia to Expand Influence in Indo-Pacific: Report

China’s People’s Liberation Army (PLA) is reportedly building a secret naval base in Cambodia as the Chinese Communist regime seeks to expand its “historic sphere of influence” in the Indo-Pacific region.

The base buildings are at a northern part of Cambodia’s Ream Naval Base on the Gulf of Thailand, The Washington Post reported on June 6, citing two Western officials who spoke on the condition of anonymity.

This would be China’s second known foreign naval base; the first is located in the East Africa country of Djibouti.

A ceremony marking the expansion of the Ream base is expected to be held on Thursday, with the Chinese ambassador to Cambodia in attendance, according to one of the officials.

The second official said the expansion plan will provide the PLA “exclusive use of the northern portion of the base, while their presence would remain concealed,” although the claim has been denied by a Chinese official who spoke to the news outlet.

“What we’ve seen over time is a very clear and consistent pattern of trying to obfuscate and hide both the end goal as well as the extent of Chinese military involvement,” the second official said. “The key thing here is the [PLA’s] exclusive use of the facility and having a unilateral military base in another country.”

Australian Prime Minister Anthony Albanese said on Tuesday that China building a naval base in Cambodia is “concerning” and claimed that his administration communicated with the Cambodian government on the matter.

“We are in regular contact with the Cambodian government and we have been consistently assured that no foreign military will be granted exclusive access at Ream,” Albanese told reporters in Indonesia, the Australian Associated Press reported.

“We’ve been aware of Beijing’s activity at Ream for some time and we encourage Beijing to be transparent about its intent and to ensure its activities support regional security and stability,” he added.

The PLA constructed three new building at Ream over the course of August and September last year, according to satellite images released by the U.S. think tank Asia Maritime Transparency Initiative.

The Pentagon said in a 2021 report [pdf] that Cambodia demolished two U.S.-funded facilities at Ream after declining Washington’s offer to pay for renovation of one of the facilities, “which suggests that Cambodia may have instead accepted assistance from the PRC (People’s Republic of China) to develop the base.”