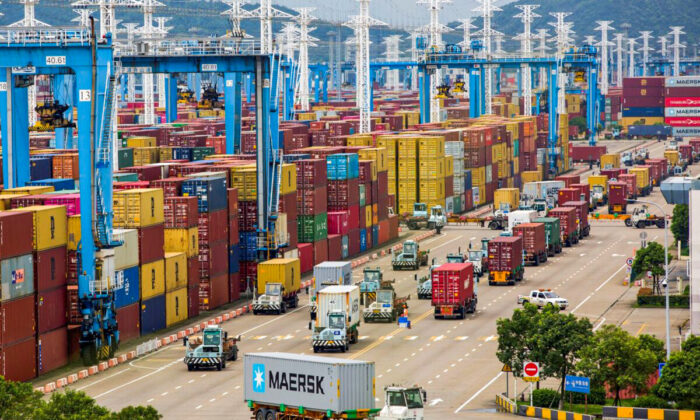 Lines of trucks are seen at a container terminal of Ningbo Zhoushan port in Zhejiang province, China, on Aug. 15, 2021. (cnsphoto via Reuters)
Thinking About China

On Jan.15, 2020, then-President Donald Trump announced a historic trade deal with Beijing that had two deadlines for increased imports, summing to $200 billion, from China.

Both deadlines passed after the election of Joe Biden, yet his administration has done nothing concrete in response. President Biden’s trade representative told Congress in a new report that the administration “is prepared” to do something, but Biden is actually letting Beijing slide.

That’s because China’s equivalent of crack cocaine for consumers feels so good—until it kills us. We love buying cheap stuff on Amazon. Corporations love the profits. Politicians do exactly what their voters and campaign contributors want. Everybody shoots up with the illusion that what feels good today, will be good for tomorrow.

Not so much, when China uses its profits to build a military and political influence machine capable of defeating America, democracy, and the market-based system on a global scale.

Trump tried to wake up our addicted economy with a bucket of cold water called tariffs, on $370 billion of Chinese imports. He wanted to put an end to the addiction, despite screaming protests of our corporations and their economists.

Trump used the tariffs, and a credible threat for more, to extract a $200 billion promise from Beijing in January 2020. In exchange, he decreased some of the tariffs. The rest remain in place, even under Biden.

In addition to the $200 billion, Beijing agreed to structural measures against forced technology transfer, subsidies, and regulatory barriers, as well as protections for intellectual property, the liberalization of China’s financial services sector, and specific import targets for American agriculture, services, energy, and manufactured goods.

Beijing never would have agreed to this except under Trump’s tariff thumb screw.

According to Trump, his trade leverage also got China’s help on North Korea’s nuclear weapons and limits on China’s production of fentanyl. The latter is a synthetic opioid smuggled into the United States through Canada and Mexico, and that along with prescription opioids, killed almost 92,000 Americans in 2020 by overdose.

The deal wasn’t all roses. For China, it may have included perceived concessions on the independence of Hong Kong and sovereignty of Taiwan, according to reporting on an August 2020 review of the deal. If former U.S. national security adviser John Bolton is to be believed, Trump allegedly threw the Uyghurs under the bus as well, during 2019 trade negotiations with Chinese leader Xi Jinping in Japan.

Trump’s flattery of Xi and alleged political sacrifices are par for the course in trade negotiations. He at the same time tried to pressure Xi by threatening to decouple entirely from the Chinese economy, and more specifically and immediately, to ban TikTok and WeChat, both of which are popular apps owned by Chinese companies.

How China Broke Its $200 Billion Promise

The deal gave Trump a public win leading into the elections of 2020, but China immediately started reneging on it, ultimately using the pandemic, the resulting global recession, lower commodity prices, disrupted supply chains, and the U.S. government’s “continuous sanctions and suppression towards Chinese entities” as excuses.

Just five months into the deal, when Trump was still president, China had only imported 47 percent of what it should have to meet the 2020 year-end target, according to Chad Bown at the Peterson Institute for International Economics.

A mid-2020 survey of 100 companies doing business in China found that 13 percent had been asked to transfer technology compared to just 5 percent in 2019. The Trump deal was not going well, according to Bown. But Trump couldn’t emphasize it publicly, as he was knee-deep in an election.

While Beijing promised $227.9 billion of total imports by the end of 2020, it actually imported just $134.4 billion that year, well under the 2017 baseline of $151.2 billion. The promise of $274.5 billion of imports by the end of 2021 resulted in just $154.4 billion, barely above the static baseline, and well below what the imports would have been without the tariffs, according to Bown.

Note that both of the deals’ deadlines expired after Biden was elected president. It was for his administration, not just Trump or his trade representative, Robert Lighthizer, to project the credibility of consequences, and then impose them, for Beijing not sticking to its promises.

And according to Jamieson Greer, former chief of staff to Ambassador Lighthizer, “Bown’s claim that the US exported none of the extra $200B is primarily dependent on the numbers for services trade, which is dominated by travel, which obviously stopped during the entire pandemic.”

Greer continued: “A focus on actual goods trade is much more instructive, and shows that we had record good exports to China in 20/21 despite not fully meeting purchase targets. The point is even though China didn’t meet the deal, it still resulted in record exports.”

Regardless, China finked on the deal. And almost no progress was made by either the Trump or Biden administrations against China’s subsidies, which have for decades hollowed out America’s industrial ecosystem.

What lesson should we have learned long before Trump ever came on the scene? Don’t trust the Chinese Communist Party. It thrives on making and breaking agreements.

But the lesson the corporations and their economists want us to believe is different: end the tariffs. They want us to return to the feel-good days of crack cocaine and unmitigated free trade with the world’s biggest enemy of democracy.

Don’t buy into the temptation. We need to strengthen, enforce, and broaden our China tariffs, including by encouraging similar China tariffs by our allies in Europe and Japan, for example, if we want Beijing to become not only more economically open, but more democratic.

Only if China fully reforms and liberalizes will it cease to be a threat to democracies and markets worldwide. It will not do so, without the leverage of tariffs.