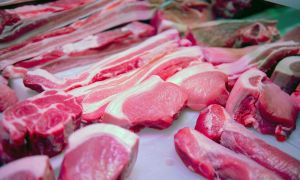 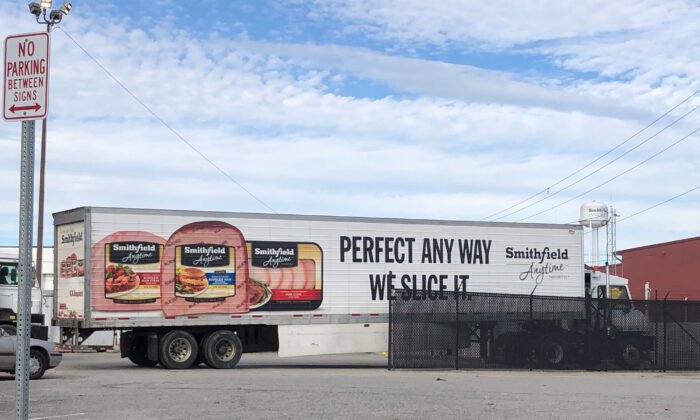 SMITHFIELD, Virginia—Smithfield Foods’ slaughterhouse in Virginia used to carve up pork for American sandwiches and holiday dinners. But workers now box up pig carcasses to ship to China, according to employees, local officials and industry sources.

The transformation at the Smithfield, Virginia, plant shows how the global meat industry is adapting to profit from African swine fever, a fatal pig disease that has killed millions of hogs in China and turned the world’s top pork consumer into a major meat importer.

Bought by China’s WH Group Ltd. six years ago for $4.7 billion, Smithfield Foods has retooled U.S. processing operations to direct meat to China, which produced half the world’s pork before swine fever decimated the industry.

The world’s biggest pork processor operates a white, box-shaped meat plant in Smithfield, Virginia, home to 8,000 as well as the company’s headquarters and a wider tourist economy built on its famous hams, bacon and sausages.

Since late spring, pigs trucked to the plant have been slaughtered and sliced into thirds for shipment to China, where Chinese workers process the carcasses further, company employees and industry sources told Reuters.

“They got an order to fill: China,” said one plant worker, who asked to remain anonymous.

Smithfield Foods declined to comment on the change or allow a reporter to visit the Virginia plant, which slaughters about 10,000 pigs a day.

The company previously said it was upgrading the facility, without giving details, and that U.S. business was a priority. Other Smithfield Foods plants in the United States have continued to slaughter pigs for the home market, industry sources said.

WH Group, known as Shuanghui International Holdings when it bought Smithfield Foods, did not respond to a request for comment.

However, Arnold Silver, Smithfield’s director of raw materials procurement, said at a recent industry conference that sales to China could eventually create bacon and ham shortages for American consumers.

The outbreak of African swine fever has killed up to half of China’s hog herd since August 2018 and pushed prices so high that Chinese importers are willing to pay hefty tariffs that Beijing imposed on U.S. pork as part of the countries’ bruising trade war.

U.S. pork producers say China’s losses from the disease have created a once-in-a-lifetime opportunity for sales.

After shifting operations, Smithfield Foods can process pigs more quickly in Virginia because employees are doing less work on each carcass, according to the plant worker. The job is still difficult, though.

“They freeze it up. It’s heavy,” said the employee, who was wearing a brace to support his back and a sweatshirt to keep warm.

The United States exported 294.5 million kilograms of pork to China between January and August, according to U.S. Census Bureau data, more than in the whole of 2018.

Frozen carcasses accounted for about 20 percent of exports by weight from January to August, up from 0.3 percent during the same period in 2017, the data show.

Smithfield Foods was the top shipper this summer, sending at least 17.6 million kilograms of pork to China between June and September, according to Panjiva, a division of S&P Global Market Intelligence. Kansas-based Seaboard Corp sold at least 5.3 million, Panjiva said. The firm noted its data does not capture all shipments.

Seaboard did not respond to a request for comment.

“Down the road, if this continues and we ship a lot of product to China, certainly I think we could see shortages, particularly on hams and bellies,” Smithfield’s Silver told the conference.

Smithfield Foods renovated its Virginia plant to supply carcasses to China, according to a person with direct knowledge of operations who asked not to speak publicly about the changes.

“There were departments that were completely eliminated or erased or remodeled,” the person said.

Tyson Foods Inc. and JBS USA are also maneuvering to increase sales by stopping the use of the growth drug ractopamine, which is banned by China.

China is importing U.S. hog carcasses because it needs the entire animal, rather than specific parts, market analysts said. China has excess capacity in its processing industry due to the disease outbreak and can cut up U.S. carcasses to meet domestic tastes more cheaply than buying already-butchered pork, they said.

“They need to be able to run their plants and keep workers employed to the extent possible,” she said.

Smithfield Foods said it is subject to the same Chinese trade tariffs as other U.S. pork producers, despite being owned by a China-based company.

The start of shipments coincides with the conversion of Smithfield Foods’ Virginia operations, traders said.

Increased exports of hog carcasses are so new that the U.S. Department of Agriculture said it plans to clarify its reporting requirements for shippers to make sure sales are being counted accurately. Some meat traders said weekly recorded sales have looked low.

Bob Brown, a longtime U.S. livestock market analyst, said tracking carcass sales to China should not be difficult because most are being done by Smithfield Foods from its Virginia facility.

“This is one plant, one company, one place,” Brown said.