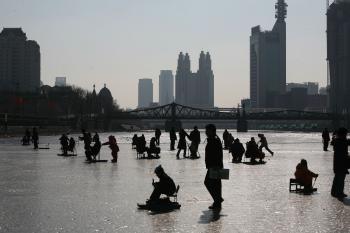 At a congressional hearing, organizations including Amnesty International and Reporters Without Borders said the climate was once again icy for Chinese rights activists after last year's Beijing Olympics sparked hopes for a thaw.

The new administration under Obama and Secretary of State Hillary Clinton "have a particular interest in the human rights situation in China," said James McGovern, co-chair of a House of Representatives commission on human rights.

Among several recommendations Mr. Kumar asked that Obama urge Chinese authorities to abolish the "Re-education through Labor" system, under which approximately 250,000 to 500,000 people are imprisoned without charge or trial.

The author says she had been arrested by police in Shenyang for talking to people about the persecution of Falun Gong. She describing beatings and other torture that left some of the women disfigured, their faces swollen, distorted and unrecognizable, and some were left lame from torture. One woman, a Ms. Shen from Fushun, was tortured for over two months and became mentally disabled.

"Despite such ill treatment," the author of the report says, "the guards also forced the Falun Gong practitioners to do military drills, sing the evil Chinese Communist Party songs, and recite the prison regulations. Anyone who did not cooperate was subjected to torture. Police also assigned a Falun Gong practitioner to be 'the recreation committee member' who was expected to lead practitioners in singing the propaganda songs. She was beaten if she did not cooperate."

Jan 27 — Swiss shield China's PM from protests during visit
BERN, Switzerland (Associated Press) – Switzerland restricted media and public access around the Federal Palace during a visit by Chinese Prime Minister Wen Jiabao on Tuesday in an effort to shield him from potential protesters and awkward questions.

Heightened security for major state visits is not unusual in Switzerland. But the restrictions on media and public access appeared aimed at preventing a repeat of events 10 years ago when then-Chinese President Jiang Zemin was angered by Tibetan protesters who had gathered on the government square and the roof of an adjacent building.

"Don't you have the capacity to lead this country," Jiang Zemin asked the Swiss government after being greeted by protests.

Wen's visit Tuesday was to focus on economic relations between the two countries, the Federal Chancellery said. The Chinese premier would take no questions from the media after delivering a brief statement following the talks, it said.

Later this week, Wen plans to attend the World Economic Forum in Davos, where officials have authorized a small demonstration by Tibetan groups on Wednesday.

According to state-run media, more than 5,700 suspects have been rounded up for questioning so far.

The campaign seems to be targeting Tibetans without some form of official identification. According to the Tibetan Centre for Human Rights and Democracy, police questioning is aimed at finding people who were involved in the March 14 protests last year.

"A profound readjustment is brewing in the international system," the paper says.

Jan 27 — China to begin projecting military around the world: analysts
LONDON (AFP) – China is likely to begin deploying its military increasingly further from its borders, analysts at a top thinktank said on Tuesday.

The Asian power was also unlikely to constrain its defence budget because of an economic downturn.

Last March China announced its defence spending would rise 17.6 percent in the coming year, reaching 57.2 billion dollars, using end-2007 exchange rates.
Huxley, the thinktank's senior fellow for Asia-Pacific security, said concerns over the transparency of those figures led him to believe military spending in China may be as much as 50 percent higher than publicly-available data.

Jan 27 — China as number three
The Japan Times – The Chinese government has revised its estimate of how much the economy grew in 2007. The revision is upward and, if accurate, means that China has surpassed Germany to become the third-largest economy in the world. That may start some celebrations on the mainland, but the Beijing leadership knows better than to bask in the moment. China may be a rich country, but its citizens remain poor. More important, the global slowdown poses serious challenges to a Chinese leadership whose legitimacy rests on its ability to deliver increasing prosperity to its citizens.

On Jan. 14, China's National Bureau of Statistics revised upward its estimate of economic growth in 2007, from 11.9 percent to 13 percent, reaching 25.7 trillion yuan ($3.5 trillion). The revision — the second for 2007 — underscores the unreliability of all Chinese statistics: Methodological rigor is a relatively new phenomenon in a society where reality itself is malleable and politics, rather than economics, may be the most important determinant of results. Hitting targets is more important than getting the numbers correct.

Even if Beijing manages to keep its citizens happy or to suppress dissent, it is vitally important that the world properly understand the meaning of China's rise. That phrase is used far too casually and its significance is usually misunderstood. China as a country is rich, but Chinese are not. GDP per capita in China was $2,800 in 2007; by contrast, in Germany, average income was $38,800. China is ranked among the bottom tier of nations by this yardstick. Chinese are proud of their country's economic accomplishments, but they also measure how the economic development has affected their own lives. The greater the economic disparities, the greater their own discontent.

Jan 27 — WTO's China Piracy Ruling: All Bark And No Bite
Forbes (Tina Wang) – Washington claimed a tactical victory in its intellectual property case against China, but it is losing the war.

In its efforts to get China to curb piracy, the United States claims that it now has the World Trade Organization on its side. But the proclamation of victory is empty or premature, or both.

An 18-year-old man succumbed to the deadly H5N1 strain of the virus Monday, bringing to five the number of fatalities from the disease so far this year in China, compared to just three in the whole of 2008.