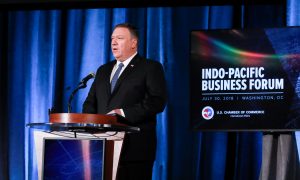 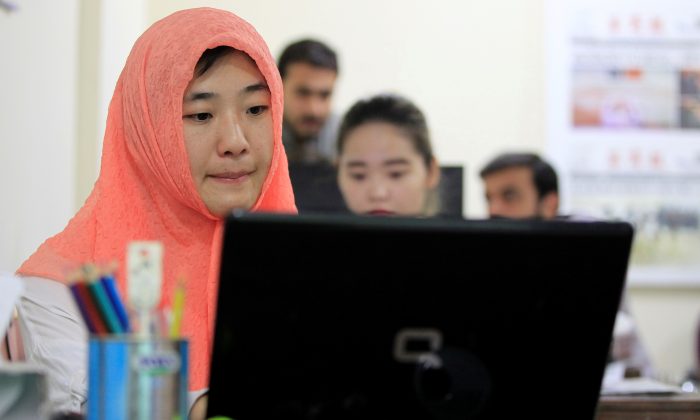 Reporters work at the office of Hushang, a Mandarin language weekly newspaper, in Islamabad, Pakistan on June 9, 2017. (Caren Firouz/Reuters)
China

ISLAMABAD–In a small office at the Pakistani Television Corporation (PTV) headquarters in Islamabad, producers are preparing to air a video interview of a Pakistani man and his Chinese bride.

The woman in the footage is dressed in traditional Pakistani clothes, sitting next to her husband who addresses her in fluent Mandarin, amplifying a message of trans-national love prevailing over differences in language, religion and culture.

The videos are the latest sign of China’s growing push to build up cultural “soft power” to complement the China Pakistan Economic Corridor (CPEC), the $60 billion infrastructure program it has launched as part of the Asian giant’s flagship “One Belt, One Road” (OBOR, also known as Belt and Road) initiative.

Over the past year, China has sent state-owned PTV and other commercial television channels a series of documentaries, dramas and other television programming for free, officials from PTV told Reuters.

Experts say China has been ramping up attempts to win the hearts and minds of citizens in OBOR nations through language, traditional media and social media campaigns.

China is boosting its Mandarin teaching through state-backed language and culture organizations called Confucius Institutes—Pakistan is home to four with two more Confucius resource centers set to open—and spreading exposure to its arts and narrative media in a bid to engage everyday Pakistanis.

Earlier this year, PTV World aired its first Chinese cartoon series, titled “Three Drops of Blood,” following its premier at the government-funded Pakistan National Council of Arts, where the Chinese Embassy rented a large portion of the building to host a China Cultural Center.

Recent investments in TV and film follow Chinese interest in print media. Launched in 2017, Huashang, the first-ever Chinese language newspaper in Pakistan, now boasts a readership of over 60,000 a week.

With around 25,000 Pakistanis learning Chinese at home and another 22,000 Pakistani students in China, there is some way to go before Mandarin challenges English in Pakistan, where the legacy of British colonial rule is everywhere.

But signs of China’s presence are increasingly visible, from expatriate engineers and their families shopping in city centers to a growing number of Chinese tourists visiting the spectacular scenery of Pakistan’s rugged mountainous north. Locals report an increasing appetite to engage using shared cultural touch points and language—sometimes with business in mind.

Everyday cultural contacts, while still limited, are expanding, although there is inevitably sometimes a darker side, notably in the periodic scandals over people-trafficking involving Pakistani girls sent to China to be married to men unable to find a wife at home.

There is a harder edge to some of China’s soft power, notably in its response to criticisms of the OBOR initiative as a neocolonial project, promoting environmentally damaging projects such as coal-fired power plants that benefit Chinese companies more than Pakistan.

In October 2018, Islamabad has slashed the size of the biggest Chinese “Silk Road” project in Pakistan by $2 billion due to government concerns about the country’s debt levels.

The mega-project to revamp the colonial-era line that stretches 1,163 miles from Karachi to the northwestern city of Peshawar was initially priced at $8.2 billion, but wrangling over costs has led to delays.

The United States has criticized OBOR projects, warning that the loans could turn into debt traps for poor countries unable to pay the money back.

By Mehr Nadeem. The Epoch Times contributed to this report.