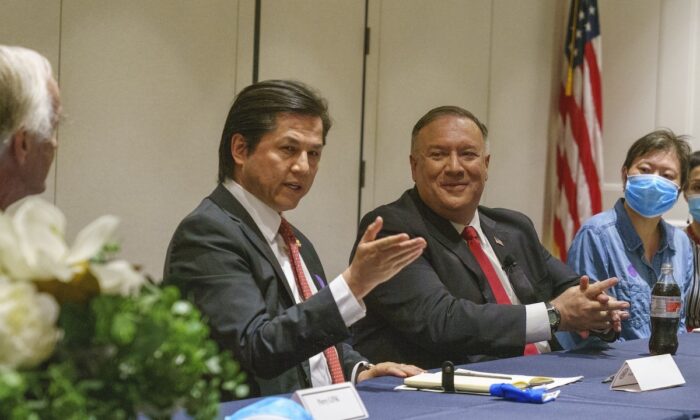 A file image of Nury Turkel, the vice chair of the U.S. Commission on International Religious Freedom, meeting with then-U.S. Secretary of State Mike Pompeo and Chinese dissidents in Washington in July 2020. (Ron Przysucha/U.S. State Department)
Thinking About China

Turkel pulls no punches, including on issues of Uyghurs, genocide, and Falun Gong

Nury Turkel was a Uyghur boy once from the city of Kashgar, China. To be sure, he was no ordinary Uyghur. His father was a math teacher. Turkel worked for an American consulting company in Beijing.

But then, no Uyghur is ordinary anymore. They are all under the terrifying pall of genocide imposed by the Chinese Communist Party (CCP). Even most of those living abroad have a brother, an aunt, a mother, and friends back in China for whom they worry. Those who don’t can have a sense of loss for a place they could once have called home.

While Turkel now lives in Washington, where he was elected chair of the U.S. Commission on International Religious Freedom in June, his mother still lives in Xinjiang. That region is under occupation by the CCP, which is driving Uyghur and other Turkic Muslims into oblivion on a daily basis.

The CCP forced Turkel’s father, in his 70s and diabetic with shaky hands, to attend daily sessions in a reeducation facility until his death. He only recently passed. Nury interpreted the most recent reeducation of his father as punishment for his Uyghur advocacy. For years, Nury has been unable to visit his family in China.

In full disclosure, I consider Nury to be a friend. We often speak about the Uyghurs, China, and the pressure his family is under, including those who managed to escape China and move to the United States.

The notion of “no escape” that Nury brings forth in his book, however, is that even when leaving the confines of the country, Uyghurs cannot escape the pall of genocide and the long arm of transnational repression imposed by the regime in Beijing.

The book is rich in detail about Nury’s family. His grandfather was a jeweler who kept in touch with his friends from the days of East Turkestan independence in the 1930s and 1940s.

“This obviously marked him in the Communist Party’s eyes as a highly suspect person,” writes Nury. “So he was carted off to a camp, and his daughter was sent for “reeducation,” accused of being “intoxicated with separatist ideology. Guilty by association.”

This daughter was Nury’s mother, who was pregnant with Nury while she was in the camp. Nury’s father, Ablikim, “had been sent to an agricultural labor camp.” Ablikim’s math training did little to prepare him for the long and grueling days in the fields.

Ablikim had cousins on the Soviet side of the border near Xinjiang. “By the late 1960s, China and the USSR were no longer friends,” Nury writes. “My father’s crime was listed as ‘intoxication with Soviet ideology’ and having relatives in a hostile country. And so it was, just about a year after they were married, that both my parents entered the vast Communist penal system.”

His mother’s “reeducation camp” was more like a prison in a downtown Kashgar building of brutalist Soviet architecture and boarded-up windows.

“In these gloomy confines, I came into the world in 1970,” Nury writes. “Food was scarce and my mother suffered terribly, both physically—there was little nutrition for anyone, let alone the mother of a newborn baby—and mentally due to her worry over me.”

Both mother and child were malnourished. “When she tried to breastfeed me, almost no milk came out, and she would cry in pain.”

While the account of Nury’s family gives emotional weight and historical context to the book, it is in no way a pure biography but much more. At its core, the book calls for the world’s people to recognize the genocide against Uyghurs—and take action.

It is also a sophisticated behind-the-scenes window into the Washington power struggles over China, and a multilayered exposition of the China threat, from technology-enabled national repression within China, which goes well beyond the Uyghurs, to the international reaction (and non-reaction) to the CCP’s genocide from the United States to Europe.

As Hannah Arendt wrote about the genocide imposed upon the Jewish people, evil is banal. It is all too common for regular citizens to look the other way as their neighbors are brutalized.

We are all responsible for the ongoing genocides today, which are taking place on our watch as citizens in a global community. These also include those outside of China, against the Rohingya in Burma (Myanmar), and those living in the Tigray region of Ethiopia. Genocide is the world’s worst crime, so it merits sustained global attention and action.

The CCP also commits genocide against the Falun Gong spiritual practice in China. Read the U.N. definition of genocide and compare that to what is happening against Falun Gong today, and it is hard to conclude otherwise.

Turkel’s book leads the way in advocating for all who suffer in China. But the anguish of the Uyghurs truly and naturally bleeds through the pages of Nury’s lucid prose. He goes beyond the travails of his own family to give the personal stories of many other Uyghurs in terrifying detail. Most of these stories—of torture, brainwashing, forced sterilization, and rape—he got directly from the Uyghurs involved in the course of his human rights advocacy and work as a lawyer.

Nury spares no controversial topic, from the demand for independence by some Uyghurs to the controversies surrounding Uyghurs interned in Guantanamo and those charged with terrorism by the CCP. Nury squarely faces divisions within the Uyghur community, for example, over how loudly to demand independence for East Turkestan.

This is what Xinjiang used to be called, just prior to the Soviet Union’s double cross of the Uyghurs and the CCP’s occupation and genocide.

The repression of the Falun Gong is also addressed in three different sections, including their arbitrary detention and subjection to slave-like labor conditions and forced organ harvesting from prisoners of conscience.

Uyghurs, Tibetans, Falun Gong, and other persecuted minorities in China, including even Taoists and Christians in some cases, are increasingly under CCP pressure that approaches conditions of genocide by the U.N. definition.

Nury explains this perfectly in his very personal appeal for the Uyghurs.

His book lays the experiential foundation for what I believe should be a principle of international law. When a government commits genocide against its people, including one or more minorities, the victims have a right to declare independence from that government.

Genocide breaks the social contract. Arguably, the lesser “crimes against humanity” should do the same.

What Xi Jinping is doing in China and Vladimir Putin is doing in Ukraine are grounds for the breakup of their countries into smaller and more manageable units, and the renewal of social contracts that grant the rights of government to new, more democratic organizational entities that have greater respect for broad political participation and human rights.

If we are lucky, Nury’s next book will address some of these tough issues.