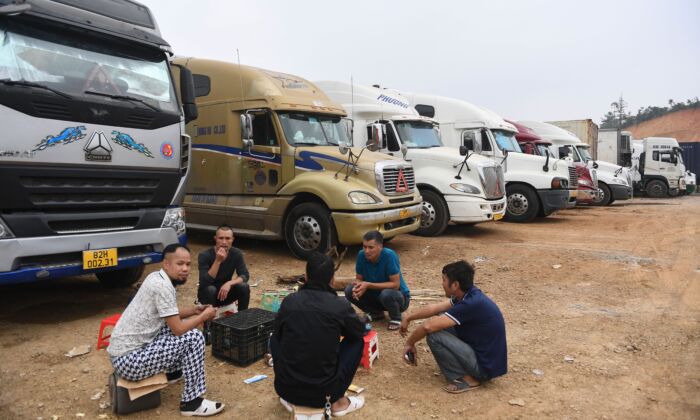 Truck drivers gather at a makeshift parking lot where Vietnamese container trucks are waiting to cross the Vietnam-China border in Lang Son Province on Jan. 7, 2022, as thousands of trucks carrying fruit remained stuck at the border while China tightened its border policies. (STR/AFP via Getty Images)
INSIDE CHINA

Over 10 of China’s 34 provinces and regions blocked most entrances of their highways on April 11, and an estimated 30 million truckers are stuck on highways or in unfamiliar cities.

“More than half of China can’t receive or send out goods. Thirty million trucker drivers are stranded during the deliveries,” reported by state-run Hubei Guangdianrong on April 9.

“I thought I could earn 2,000 yuan ($314) more on this trip … However, I have been stranded in Shanghai for 12 days and don’t know when I can leave,” state-run magazine China Entrepreneur quoted truck driver Wei, who was locked with two peers on the streets without basic living necessities.

“I spent over two weeks to finish a delivery that normally needs two days,” state-run Sanlian Life Weekly quoted trucker Lu on April 10, who couldn’t leave the highway after his delivery.

A 34-year-old male trucker cried in front of a group of strangers when was given two bowls of rice on a highway after being stranded for seven days, according to state-run Hangzhou News.

China’s zero-tolerance policy on COVID-19 closes service areas on highways where anyone has been diagnosed with COVID-19 in the past 14 days, doesn’t allow truck drivers to leave the highway if they pass by a city with reports of an outbreak, and doesn’t allow a driver to leave the cabin while the truck visits a city under COVID control.

Wei, 39, owns a 42.7 foot truck which can load over 30 tons of goods. He and two other truckers received an order to ship nearly 100 tons of potatoes from Shandong Province to Shanghai on March 28.

When Wei arrived at Shanghai on March 29, the destination—a wholesale market—was shut down, and Wei and the other two truckers had nowhere to unload the potatoes. On the evening of the day, the potatoes’ owner arranged the truckers to stay inside a storage facility in Minhang district close to the Shanghai Hongqiao Airport, where they met several other truckers who were in the same situation.

“All restaurants, shops, and supermarkets in the city were shut down when we arrived. We lived inside the truck and tried to feed ourselves with the food we carried from Shangdong,” Wei said. The three truckers parked their vehicles inside the storage and lived inside.

In the following days, the owner tried to sell the potatoes and find some food for the three truckers. However, the entire population of the city couldn’t find enough food due to the lockdown.

With the approval of the owner, the three truckers on April 3 made a stove using a trashed iron bucket, searched for trash that could be burned, and started cooking the potatoes to feed themselves.

“All potatoes were sold out on the evening of April 8,” Wei said. While they were relieved that they were free from the goods, they were subsequently kicked out of the storage area and made homeless.

“We are waiting for the lockdowns to lift. We don’t know when the local government will allow us to leave,” Wei said. The potatoes’ owner set aside about 110 pounds of potatoes for the truckers, which would feed them for about six days.

Wei said they weren’t alone. A big number of truckers were living on the streets in Shanghai and waiting for the lockdown to lift.

Life on the Highway

Lu, 41, has been a trucker for 12 years. This is the first time he has been stranded on a highway for over two weeks.

“I picked up an order in [southwestern China’s] Chongqing city on March 26 to ship aluminum plates to Shanghai,” Lu said. The plates were delivered to “a special government agent.”

Lu told Sanlian Life Weekly that he could arrive at Shanghai on March 28 if there were no COVID-policies. He had stayed at two different service areas in Zhejiang Province for days to wait for an entry permit to enter Shanghai although the goods he delivered were marked as high priority.

“The Jiaxing Xincheng Service Area was full of trucks when I arrived there [on March 29]. I talked to other truckers and found out that most of them were delivering goods to Shanghai but couldn’t receive a pass,” Lu said.

Lu obtained a pass with a special arrangement on April 1, and delivered the goods and drove back to the highway with the pass. However, he realized that he could no longer pass a highway checkpoint if he wanted to leave the highway. Zhoukou in Henan Province and Xuzhou in Jiangsu Province had recently reported outbreaks, and he had passed these two cities in the last 14 days. As a result, the cellphone-generated health code—the system with which the Chinese regime tracks people’s travel, vaccination, and test histories—had raised his COVID status to two stars, meaning he was no longer allowed to leave the highway.

“I stopped at Pingwang Service Area in Suzhou city in Jiangsu … More than 200 trucks were stranded there,” Lu said. He quickly teamed up with two other truckers to cook together and play cards to pass the time.

The service area supplied very limited food with sky-high prices. Lu and other truckers figured out that residents from nearby villages sell food to truckers late at night. Lu said that this kind of trade isn’t allowed by the regime, but the price was fair and they could order in advance.

“It’s like spies transmitting intelligence. They packed the food in plastic bags with our fake names’ tags on them, and put the bags beside the road. We paid online and picked up the bags when the night was very dark,” Lu said.

On April 9, Lu’s COVID health status had returned to green and he was allowed to leave the highway. He picked up an order from nearby Kunshan township and experienced another ordeal.

“The staff at the highway checkpoint sealed my cabin’s doors and windows after I received a negative COVID-19 test result. And I wasn’t allowed to leave the checkpoint until the goods’ owner came to pick me up,” Lu said.

Lu couldn’t open his cabin’s door or window until the goods’ owner loaded the truck and accompanied his truck to the same checkpoint. After the staff checked the seals weren’t broken, Lu was allowed to enter the highway, open his windows, and roll to the destination.

Lu said he witnessed many truckers crying or depressed while stranded on the highway. He tried to encourage himself because he had two teenage children at home who were waiting for him and his income.