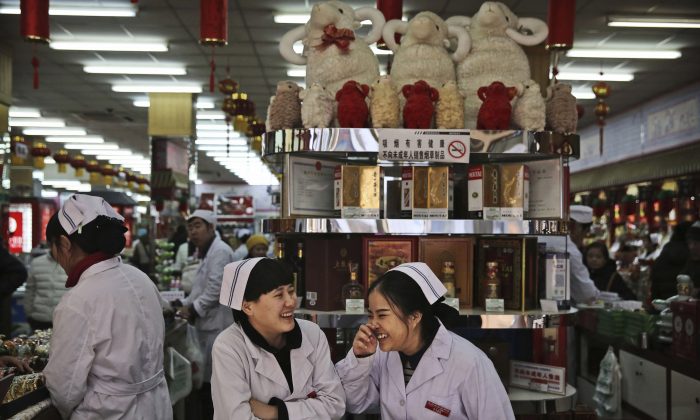 Chinese clerks chat as they wait for customers at a market in Beijing on Jan. 19, 2016. (Kevin Frayer/Getty Images)
Business & Economy

And: No Rebalancing in Sight
By Valentin Schmid

Every economy has themes. For the Chinese economy, the only theme up until recently was rapid growth. First because of exports, then because of investment in infrastructure and factories.

The Chinese economy of 2016 has many different themes. One theme is an unprecedented economic slowdown, reflected in official numbers and much worse in unofficial estimates. But then there is the theme of rebalancing. The old economy of manufacturing, investment, and exports is slowing down but the new consumer and services led economy is supposed to take over the baton.

With official sector data notoriously unreliable, China analysts get conflicting messages and don’t know which theme is actually happening. To shed light on this murky situation, Leland Miller and his team at the China Beige Book (CBB) interview thousands of companies and hundreds of bankers in China each quarter to get an accurate gauge of the themes prevailing in the Chinese economy.

CBB collects data from thousands of Chinese firms every quarter including some in-depth interviews with local executives. Although the CBB does not give definitive growth numbers, it logs how many companies increased their revenues or how many laid off workers, for example.

The most interesting finding of this quarter’s report is that the labor market is finally reflecting the weakness in the general economy. This hasn’t been the case throughout the slow-down, which started in the second quarter of 2014 according to the CBB data.

“Led by rising layoffs at private firms, first quarter job growth took another notable hit, sliding to a new four-year low. Expectations of future hiring have also taken a dive,” states the report. Only 23 percent of respondents said they were hiring, with 15 percent of companies said they are firing. China has announced it will lay off millions in the moribund steel and coal sectors of State Owned Enterprises (SOE). However, the CBB survey indicates it was mostly private companies which didn’t want to hire more workers.

Only 28 percent of the companies said they will hire in the near future. Another interesting development is the slowing growth in the country’s supply of skilled and unskilled labor. The constant flow of rural workers to the cities dramatically increased productivity over the last 20 years and provided China with a low-cost labor advantage. However, many analysts now estimate that the Lewis Turning Point has been reached and China’s working age population is declining. The CBB report confirms this thesis, as only 33 percent and 24 percent of the companies reported growth in skilled and unskilled labor.

The good news: Profit growth stabilized overall and didn’t further deteriorate compared to last quarter, although the report notes this may be due to cost cutting and layoffs.

Capital expenditure increased at only 33 percent of companies, a record low in the 5-year history of the CBB. Again it was private companies leading the way here, whereas SOEs tried to budge the trend. Another part of the old economy—manufacturing—continues to deteriorate, especially when compared to the first quarter of last year. Only 42 percent of companies reported revenue gains, which technically means the sector is in recession.

Collectively, our data show that that firms first stopped borrowing, then cut spending, and now are becoming allergic to hiring.
— China Beige Book

Most notable here is the textile sector, which has lost competitiveness due to higher wages. As a consequence, multinational companies relocate their production elsewhere in Asia or even back to the United States. The number of companies reporting gains crashed by 31 percentage points to only 24 percent compared to last year.

The last part of the old economy, the manufacturing export sector, is also very weak, with only 27 percent of companies reporting revenue gains.

The CBB cautions that any kind of monetary easing, like the Reserve Requirement Ratio cut earlier this year, is not having its intended effect. Only 16 percent of companies say they are borrowing money. Again, contrary to the People’s Bank of China’s (PBOC) easing effort, interest rates at banks and shadow lenders increased, presenting an interesting paradox. The central bank eases credit conditions, firms do not wish to borrow, and yet interest rates are on the rise. Unfortunately, the CBB doesn’t explain this phenomenon but succinctly summarizes the current state of affairs like this:

“Collectively, our data show that that firms first stopped borrowing, then cut spending, and now are becoming allergic to hiring.”

So what about the new economy? Services, consumption, retail?

“Revenue growth in retail and services each slowed again in the first quarter, a rebuke to those analysts who optimistically repeat the mantra of ‘two-tiered economy’ in lieu of compiling relevant data.” So no, at least for now, even though e-commerce companies reported gains.

The worst performers in retail were textile and furniture and appliances. The China watchers who speculated the home furnishing section would take a hit because of a slowdown in property were right.

Services presented a mixed picture, with 47 percent of firms saying their revenues increased, which is down from 48 percent compared to a year ago and not enough to take over from the old economy.

Within the service sector, China shows a remarkable similarity to the United States: The strongest subsector was healthcare.

As for the property market, residential is still under pressure but commercial property showed a rebound compared to the last quarter.

“Talk of a property rebound was also accurate only on the surface, in light of sharp differences by city size, region, and commercial (soaring) or residential (plunging) orientation,” the report states.

With respect to the official data rebound in prices and record volumes of used homes transacted in residential real-estate, the CBB survey poses more questions than it answers. Or maybe we should just trust the data on the ground and not the officially reported ones, as Andrew Kollier of Orient Capital pointed out: “I don’t trust the official figures of a rebound because they don’t cover the lower-tier cities which make up the bulk of property construction. The data is highly untrustworthy.”

About the China Beige Book: The China Beige Book uses quantitative and qualitative data to track on-the-ground sentiment as it changes from quarter to quarter across China’s industries, key subsectors, and regions. The quarterly report regularly surveys over 2,220 firms and 160 bankers across China, in addition to conducting in-depth interviews with C-suite executives throughout the country. The CBB conducted the survey for this quarter between Feb. 3 and March 7.