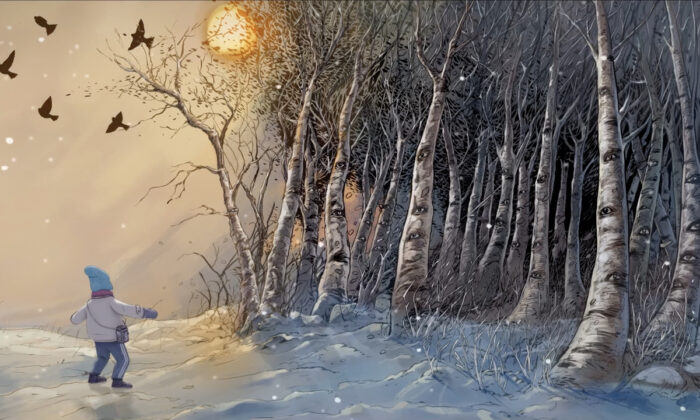 A still from the film "Eternal Spring," which tells the story of a small group of Falun Dafa practitioners who tapped into Changchun city’s state-controlled cable television to broadcast information to counter the Chinese communist regime’s propaganda against the spiritual practice. (Courtesy of Lofty Sky Pictures)
China Human Rights

An artist whose work was featured as the basis for a Canadian animated movie has had his books banned in China.

“Eternal Spring,” an animated documentary, depicts Chinese Falun Gong practitioners who hacked into state TV in 2002 in an effort to raise awareness of their plight under the Chinese regime.

In the aftermath, police raids swept the city of Changchun, the name of which translates as “eternal spring,” and Daxiong, an award-winning comic book artist and Falun Gong practitioner, was forced to flee to North America in 2008.

Daxiong published more than 100 books before he left China, some of which depicted Chinese people quitting the communist party or illustrated the events of 2002 he had personally witnessed. He was arrested and harassed multiple times by Chinese regime authorities.

“Eternal Spring,” the documentary based on Daxiong’s experiences, has been chosen as a contender for Canada’s entry for Best International Feature Film at the 95th Academy Awards.

But the nomination sparked China’s education department to ban all comic books by Daxiong.

On Aug. 25, the education bureau of Wuhan City issued a list of books forbidden to middle elementary schools and kindergartens.

The reason given was that these books were the “works” of a “key” Falun Gong practitioner who “escaped to the United States,” the Chinese authorities stated.

Falun Gong is rooted in Chinese culture, with its adherents following the universal principles of truthfulness, compassion, and tolerance. It has been a target of the Chinese regime’s persecution since 1999.

On Aug. 29, both Chinese media NetEase and Radio Free Asia also reported that many schools received notice of the list of banned books before the new semester started.

Besides Daxiong’s books, included in the list were also books by historian Yi Zhongtian such as “Chinese Classic Stories” and well-known Taiwanese author Lung Ying-tai.

The notice said that those books are “no longer suitable for students to read,” according to the “notification of senior authorities.”

Lung Ying-tai responded on her Facebook account, “It is really my honor to be banned by you.”

“The ban does not affect me, but the publishers,” Daxiong told the Chinese language edition of The Epoch Times.

Before he left China, Daxiong published more than 100 comic books on traditional Chinese culture and ancient philosophers such as Laozi, Zhuangzi, Confucius, and Mencius. In addition, major universities in China used his books for teaching drawing techniques to students.

“What the Chinese Communist Party [CCP] bans is not the book, but me as a person,” he said.

“Falun Gong has been the most sensitive topic for the CCP. The CCP never dares to openly admit its persecution against Falun Gong,” even those who oppose the CCP do not dare to talk about Falun Gong in public, Daxiong said.

As for being labeled a “key” member of Falun Gong, Daxiong said: “I am a nobody. I am just a person who has free will and cultivates Falun Gong.”

The Courage of Choice

Film director Jason Loftus previously told The Epoch Times that “Eternal Spring” is “a testament to the courage of those involved to speak up in the face of injustice, regardless of the cost.”

The Canadian-made documentary, which combines live footage and 3D animation inspired by Daxiong’s art, has been winning awards around the world.

Loftus admitted that spotlighting wrongdoing in China can be risky for a filmmaker. The Chinese regime is a powerful player in business, and Loftus said some festivals have opted not to screen “Eternal Spring” because of it, the Canadian Press reported.

Daxiong said that the persecution of Falun Gong has forced many talented Chinese people to give up their careers, and live in displaced situations. For him, coming to North America was not easy.

However, he said, as a spiritual practitioner, “it’s important to do what should be done, and choose what’s right.”

“These awards do not represent the judgment of the film, or myself as a person,” Daxiong said, “but rather a test to the juries.”

He explained, after 23 years of persecution campaigns in China, “it’s how they judge the issues related to Falun Gong, what they think about what’s happening inside China; these are the tests to them.”

Mu Qing contributed to this report.