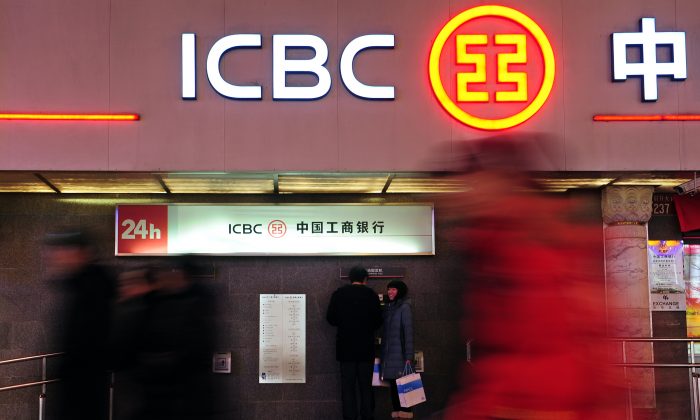 Customers use an automated teller machine at a branch of the Industrial and Commercial Bank of China in Beijing, China, on Jan. 29, 2011. (Frederic J. Brown/AFP/Getty Images)
Business & Economy

It feels like 2008 all over again. News about troubled banks hit the wires every single day. In 2013, however, the United States is not the epicenter of the crisis; it is China and things are getting worse by the day. According to Chinese media, banks have curbed lending activity in a bid to reduce risk and repair their balance sheets.

The trouble started at the end of May when reports emerged that the Industrial and Commercial Bank (ICBC) could not repay an interbank loan. Later in June, the Chinese central bank was forced to intervene to prop up the Bank of China (BoC), according to market sources. Bank of China “solemnly” denied these reports, but the damage was done.

The stock market entered a bear market June 25, 2013, and interbank rates spiked to 13.4 percent on June 20 for overnight loans, a level not seen since the last crisis. Following a relatively less serious report about Bank of China suspending transfers to and from futures trading accounts June 24, 2013, the real bomb-shell hit June 26, 2013.

According to reports by reputable business paper Caixin, banks have stopped lending activity in some branches. The paper cites a source from the Shenzhen branch of ICBC saying that the branch was under direct orders from the headquarters to suspend all lending.

“All of our loans have been put on hold,” the source said as banks are scrambling to meet regulatory lending ratios. The recent gyrations in the interbank market have made it difficult for banks to fund themselves, so they have to cut back on lending.

While it is not unusual for banks to restrict the loans branches can make at the end of the month, the duration of the suspension is concerning. Bank of China for example plans to start lending again July 15, 2013; a moratorium of three weeks.

Caixin quotes an employee from the head office at the Bank of China who said that “more emphasis should be placed on liquidity management and loan control,” in order to reduce loan-to-deposit ratios, or how much the company can lend out for the money in holds in deposits.

CITIC Bank and Huaxia Bank only suspended mortgage loans, according to Caixin. The Yanzhao Metropolis Daily cites real estate agent saying that banks would still consider home loan applications, but take much longer to review them.  “When the loan can be approved is something that none of us can guarantee,” an employee from the Zhichun-Road branch of Shanghai Pudong Development Bank told Yanzhao Daily.

Other media reports state the lending cuts are mostly focused on loans for second homes. Second homes are a preferred vehicle for speculation and therefore carry a high risk for banks.

Nonetheless, the impact on the Chinese economy is significant. In China, big banks control economic growth through the issuance of loans for real estate and infrastructure investment. If loan growth grinds to a halt, so will GDP.

Curbing loans for speculative real-estate investment is a necessary step to pull the housing market out of bubble territory. In the short-term, however, it will put pressure on prices and could lead to the wholesale liquidation of leveraged speculators. Similar to the bursting of the subprime bubble in the United States, this could lead to unintended consequences for the economy as a whole.

Ariel Tian contributed to this report.