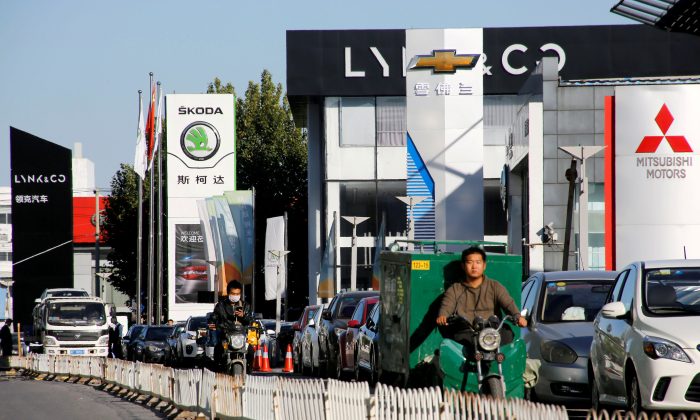 BEIJING—China’s car sales fell the most in nearly seven years in September, stoking concerns the world’s biggest auto market could contract for the first time in decades this year amid cooling economic growth and a biting trade war.

Vehicle sales slumped by 11.6 percent to 2.39 million units last month, the third straight decline, the China Association of Automobile Manufacturers (CAAM) said on Oct. 12. It cited a sluggish economy, deleveraging and a tough pollution crackdown as reasons for the steep fall.

A stalling of China’s giant auto sector will be a concern for the country’s leaders in Beijing. It is a major driver of the economy and an important barometer of Chinese consumers’ willingness to open their purse strings.

“The automotive industry has been a driver of China’s economic growth for years. Now it is pulling back,” Xu Haidong, CAAM assistant secretary general, said at a briefing in Beijing.

China’s top auto industry body said its already meager forecast for full-year growth would be missed, though the market should avoid a sales decline. Analysts have predicted the market could contract this year for the first time since at least the early 1990s.

The downtrend in sales underscores how international car makers, from General Motors to Toyota Motor are in for a tough ride at a time when they are increasingly looking towards China as a driver of growth.

It also exemplifies the impact of the trade war, with autos being among the sectors hardest hit by tariffs. CAAM said last month sales were impacted by a sluggish economy and the knock-on effects of the trade war.

China’s economic malaise has seen the domestic stock markets plunge and the country’s factory sector stall last month after over a year of expansion. The International Monetary Fund also cut China’s growth forecast for next year to 6.2 percent from 6.4 percent.

The slide in September auto sales follows a 3.8 percent fall in August and a 4.0 percent drop in July.

September’s drop was the most since a 26.4 percent tumble in January 2012, which was in part due to the timing of the Chinese New Year holiday that year.

Sales for the first nine months of the year totaled 20.49 million vehicles, up 1.5 percent from the same period a year earlier.

CAAM’s Xu said that 2018 sales growth would miss the association’s previous forecast of a 3 percent rise. Sales were also up 3 percent last year, but sharply down from a 13.7 percent gain in 2016.

Amid the slowdown, an army of Chinese car dealers is feeling the squeeze and is pushing for government support to revitalize growth.

Yale Zhang, head of Shanghai-based consultancy Automotive Foresight, said that if sales actually shrink this year it would be a “watershed moment” for the industry.

“It’s very alarming and is even causing panic among some automakers and suppliers. That’s because the market has been growing non-stop every year for more than twenty years, and those companies make plans based on growth,” he said.

“They don’t know what to do and worry about survival.”

Ford Motor Co which has been struggling to turn around falling sales in the market, said on Oct. 12 that September sales in China were down 43 percent.

China’s broader economic woes have led to a particular slowdown in the demand for cars in smaller, lower-tier cities across China, some car makers have said, which until now were the engine of growth for the country’s auto industry.

Zhang of Automotive Foresight said that several factors had combined to cause this, including high gas prices this year which had hindered growth in lower-tier cities.

The industry is also facing a shake-up as decades-old rules change to allow foreign car makers to own majority stakes in local joint ventures. Luxury German car maker BMW said on Oct. 11 it would take control of its main China venture in a $4.2 billion deal.

The changing auto landscape is throwing up distinct winners and losers in the market, a major shift from the golden years of growth where most players were guaranteed decent returns.

Among those struggling in China the most are Peugeot, Hyundai Motor and its sister brand Kia Motors, Ford, and Japanese car maker Honda Motor.

That took new-energy vehicle sales in the first nine months of this year to 721,000 vehicles, up 81.1 percent from the same period a year earlier.