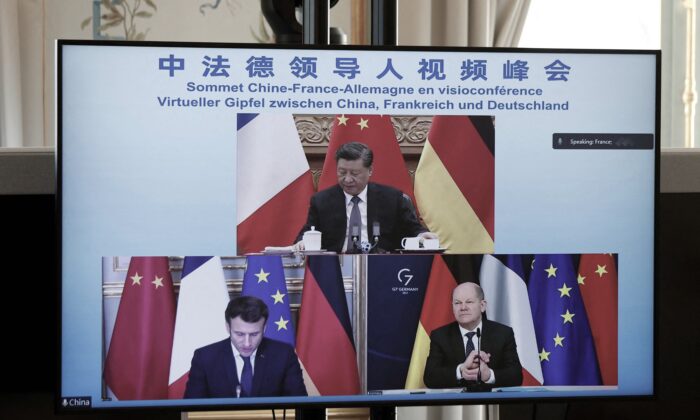 Beijing has said it will retaliate if the United States attempts to sanction Chinese firms over the current conflict between Russia and Ukraine.

“In the process of settling relations with the Russian Federation, the US is not entitled to impose so-called sanctions against Chinese companies and individuals,” Chinese Foreign Ministry spokesman Zhao Lijian reportedly said on March 10.

“Otherwise, China will provide a resolute and serious response.”

Zhao’s warning was likely in response to statements made a day earlier before by U.S. Commerce Secretary Gina Raimondo. Speaking to The New York Times, Raimondo warned Beijing of the severe repercussions that Chinese companies would face if they attempt to “aid” Russia.

The United States has previously stated that any attempt to engage in economic activity that helps Russia to evade sanctions will be met with retaliatory measures. In other words, if Beijing undermines the U.S. attempt to punish Russia over Ukraine, China will be opening itself up to economic sanctions.

Was Zhao’s response just an attempt to appear strong in front of the global community, and signify that the Beijing regime’s policy choices won’t be dictated or influenced by Washington? Or is the implication that China actually is getting ready to engage in economic activity that the United States would deem hostile to its Russia policy?

It would be unlikely that China is willing to sacrifice its robust economic relationship with the United States and the European Union in favor of Russia, the world’s 11th largest economy (based on nominal GDP). As has been previously written in this publication, a massive trade relationship and an interrelated financial system form the foundation of China–West relations.

Verbal defiance to Washington’s dictates for the sake of public image may be part of the answer, but there’s likely another motive at work as well: fracturing the anti-Russia, pro-sanction Western front. If Beijing can weaken the resolve of the political and economic alliance that is currently aligned against Russia, it could simultaneously maintain its advantageous relationship with the Western world while reducing the likelihood of sanctions for doing business with Russia.

At the end of his statement, Zhao said that Washington’s actions are beneficial to no one and in reality only “have a [negative] impact on the political settlement process.”

China may not be willing to sacrifice its relationship with the United States, but its strengthening relationship with Europe ensures that it has increased leverage to split Western opinion. There’s one area in particular that Beijing has identified as a possible area to cause a rift between Washington and Brussels: energy.

A recent editorial by Chinese state media outlet Global Times focuses on the negative effect that the U.S. decision to cut off energy imports from Russia is having on its European allies. Under the subhead “Washington’s selfish tactic erodes EU autonomy,” the article denounces the United States as attempting to create a vassal state out of the continent by making it entirely dependent on U.S. energy.

It isn’t entirely wrong in its analysis that there are potential rifts in Western policy, however. The Global Times article draws attention to the fact that Germany has indeed broken ranks with the United States in its refusal to ban Russian oil and gas imports. It additionally features an infographic aimed at demonstrating the “selfish” impact of U.S. sanctions and their deleterious consequences for the EU.

“A collapse in Russian energy trade would precipitate power rationing in parts of Europe, which in turn would rupture supply chains,” the infographic alarmingly asserts.

“Rupture supply chains” is a phrase that has become extremely powerful in the Chinese international relations lexicon. The heavy (over)reliance on China in global supply chains was made painfully clear over the past couple of years during the Chinese Communist Party (CCP) virus pandemic, the effects of which are still being felt.

As such, Beijing is additionally keen to remind the Western world of the impact that increasing sanctions on China—not to mention its continued denunciation of unilateral sanctions placed on Russia—will have for global markets and supply chains.

Sanctions may impede the functioning of the China–Europe freight chain service as well, according to Chinese officials. This will threaten the entire system of intercontinental trade.

Feng Xubin, vice chairman of the China–Europe Railway Express Transportation Coordination Committee, told Global Times that many exporters have ceased shipping to the entire European continent due to economic uncertainty. This is especially true of companies that operate on a system of “cash-on-delivery.” In other words, payment is made on delivery of the product rather than in advance upon initial purchase.

“If the West cuts off Russia’s intermediate settlement channel in the international financial system, it means that the settlement system for freight charges between China and Russia will not be able to proceed normally,” Feng said.

Even if the United States views this as a beneficial move to weaken the China–Russia relationship, the impact will be much more strongly felt in Europe.

At the same time as the CCP is attempting to sow doubts in Europe over the price of Washington’s sanction regime, Beijing is additionally taking tangible steps to increase its influence on the continent through diplomatic engagement and economic capture.

This is always a winning strategy for the leadership in Beijing: gain accolades among Western populations who prioritize climate policy, subtly promoting low-growth strategies in foreign capitals, while continuing to prioritize economic expansion and industrial development in China.

In this way, Xi gets to be a climate champion abroad while maximizing growth at home, using loopholes such as that China is still considered a “developing” nation, freeing it from some of the more stringent measures passed down from multilateral climate-focused organizations.

While countries such as Germany had to fight for natural gas to be considered a form of green energy, China signed $117.5 billion in oil and gas deals with Russia. It also continues to build high-carbon emitting coal-fired power plants. Meanwhile, it builds more inefficient but cleaner forms of energy production in Europe, such as a recent Chinese-built wind farm in Croatia.

Another win-win for Beijing: increase Chinese-owned debt in a European country, while simultaneously having a photoshoot to flaunt in Brussels for disconnected green-energy obsessed politicians—all the while, firing up dirty energy factories at home.

The CCP isn’t entirely duplicitous, however. For example, it seems very genuine in its commitment to reaching its recently set 5.5 percent growth rate for the upcoming year. With an economic forecast that suggests Western markets shifting from consumption to services, a cooling real estate market, a questionable investment environment, and the Chinese domestic population’s penchant for saving, China needs to be firing on every economic cylinder.

The economic relationship with Russia is almost guaranteed to grow exponentially because of the Ukraine crisis; however, that doesn’t mean that Beijing can sacrifice its ties with Europe and the United States.

Better to try and undermine the resolve of the latter union, hindering the sanctions regime to a more narrowed focus by reminding the West that it is economically interconnected with China. A compromise would allow sanctions to continue on Moscow, while (at least partially) freeing Beijing to provide Russia with an economic outlet.

China positions itself to achieve the maximum benefit from any geopolitical situation, free of commitment to abstract principles or values. The United States must be aware of this fact.