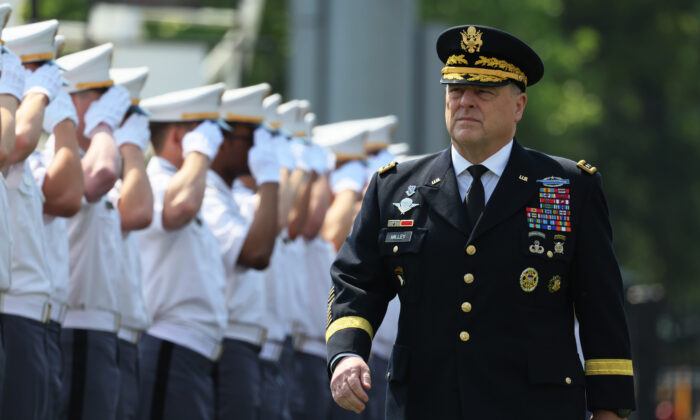 China Attack on Taiwan Not Imminent, but US Watching Closely: Gen. Milley

China’s military attack on Taiwan will not come soon, but the United States is watching the situation closely, said Gen. Mark Milley, chairman of the U.S. Joint Chiefs of Staff.

When asked by the BBC on Sunday whether he thought China would attack Taiwan, the top U.S. general replied: “There’s no indications or warnings of anything imminent at this time. But again, we watch it very, very closely.”

Milley confirmed China is clearly developing the capability to attack the island nation at some point, which Chinese leader Xi Jinping has mentioned in public speeches.

However, he described the issue of deciding to take action as a political option. “And whether they would or not, it’s a political choice, it’s a policy choice, that will be based off of how the Chinese view the cost-risk benefit at the time.”

Xi held discussions in mid-June for his approval of a plan that guides Chinese troops to prepare for “non-war military action” to secure “China’s sovereignty, security, and development interests, and regional stability.”

“In the event of China’s attack on Taiwan, he [Xi Jinping] wouldn’t call that a war, which breaks out between two countries. He must use a rhetoric of ‘special military action’ or ‘non-war military action.’ He must define war that way, just as he seeks to wipe out domestic separatist forces,” the expert told RFA.

Russia launched a war against its neighbor Ukraine in February, calling it a “special military operation,” which has caused 11,152 civilian casualties as of July 3, according to the Office of the U.N. High Commissioner for Human Rights.

China regards Taiwan as a breakaway province that must be reunified with the mainland, by force if necessary, though it has never ruled the island. The self-ruled island is a de facto independent country with its own democratically elected government, military, constitution, and currency.

China has been sending fighter jets into Taiwan’s air defense zone, posing a threat to the democracy of more than 23 million people.

The United States has no official diplomatic ties with Taiwan, but it sells arms to it under its Taiwan Relations Act, which allows the world’s largest economy to provide the island with the means to defend itself.

President Joe Biden agreed in May to keep a commitment to defend Taiwan militarily in case of attack by China.

Some analysts do not rule out that Xi would use war as a last resort to seal his leadership and his third term as China’s paramount leader despite the potential disastrous consequences.