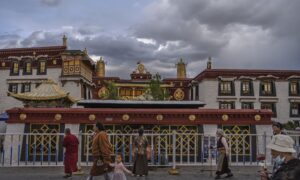 China: At Least 1 Million Cockroaches Escape From Farm in Jiangsu

At least one million cockroaches have escaped from a farm in eastern China after someone destroyed the greenhouse the bugs were being raised in.

An “unknown perpetrator” destroyed the plastic greenhouse the cockroaches were being raised in on a farm in Dafeng, in Jiangsu province, reported AFP, citing the Modern Express newspaper.

The cockroaches were being bred to use in traditional medicine. Extracts from the bugs can be used to treat multiple diseases, according to traditional Chinese medicine.

Farm owner Wang Pengsheng had invested more than 100,000 yuan ($16,000) in the cockroaches after spending half a year developing a business plan before losing the bugs, according to the report.

Wang had expected to make around 1,000 yuan ($163) profit for every kilogram of cockroaches sold.