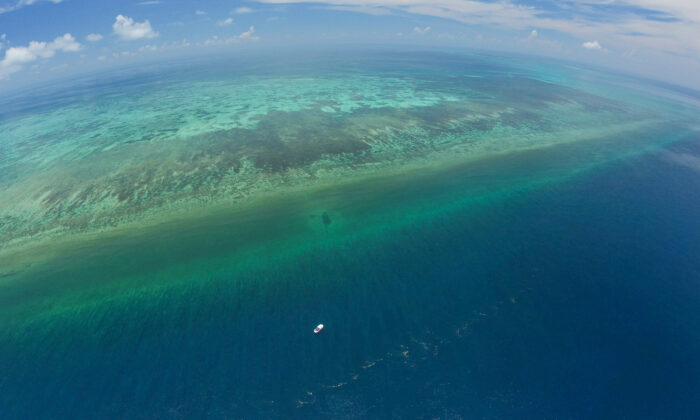 The State Department is calling on Beijing to stop its “unlawful and coercive activities” in the South China Sea after the department released a study rejecting China’s maritime claims in the sea, which the Chinese regime continues to push.

“With the release of this latest study, the United States calls again on the PRC [People’s Republic of China] to conform its maritime claims to international law as reflected in the Law of the Sea Convention, to comply with the decision of the arbitral tribunal in its award of July 12, 2016, in The South China Sea Arbitration,” the State Department said in a Jan. 12 statement.

China is currently locking horns with all its South China Sea neighbors—Brunei, Malaysia, the Philippines, Vietnam, and Taiwan—in territorial disputes over reefs, islands, and atolls in the region.

A 2016 international ruling has already rejected the regime’s “Nine-dash line” claim to about 85 percent of the South China Sea’s 2.2 million square miles. The ruling states that China’s claims had no historical basis and that Beijing had violated the sovereignty of the Philippines by asserting territorial claims with its artificial islands built on reefs and sea rocks.

The Chinese Communist Party (CCP) has rejected the ruling. In recent years, the Chinese regime has violated the ruling by building military outposts on the artificial islands and reefs in the areas that it claims. It has also deployed coast guard ships and Chinese fishing boats to intimidate foreign vessels, block access to waterways, and seize shoals and reefs.

The 47-page study (pdf), put together by the State Department’s Bureau of Oceans and International Environmental and Scientific Affairs, states why China’s four assertions, including sovereignty claims over maritime features, are “inconsistent with international law.”

China’s claim of more than 100 features in the South China Sea that are submerged below the sea surface at high tide is “beyond the lawful limits of any state’s territorial sea,” according to the study.

Beijing’s use of maritime features to claim four “island groups,” including Taiwan’s Pratas Island, also known as Dongsha Qundao, didn’t meet “the geographic criteria for using straight baselines” under the 1982 U.N. Convention on the Law of the Sea.

“The overall effect of these maritime claims is that the PRC unlawfully claims sovereignty or some form of exclusive jurisdiction over most of the South China Sea,” the study reads. “These claims gravely undermine the rule of law in the oceans and numerous universally-recognized provisions of international law reflected in the Convention.”

The study is an update of another State Department study that was published in 2014.

The United States formally rejected Beijing’s claims in the South China Sea on July 13, 2020, as former Secretary of State Mike Pompeo said the claims were “completely unlawful” and that China was conducting a “campaign of bullying to control” the area.