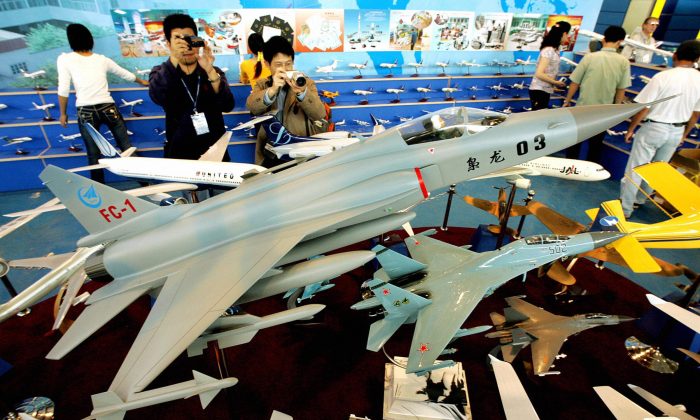 A model of the FC-1, one of the Chinese regime's fighter jets, is shown on display at China's Zhuhai Airshow on Oct. 31, 2004. The Chinese regime may start developing FC-1 jets alongside Argentina. (Mike Clarke/AFP/Getty Images)
China

The Chinese regime may be using arms sales to Argentina as a way to break into the Latin American market, says a new analysis from intelligence company IHS Jane’s.

During a Feb. 5 communiqué, officials from China and Argentina may have “affirmed a number of previously reported military programmes,” according to Jane’s.

The deals stretch the full gamut of Argentina’s military. They include weapons systems for Argentina’s army, navy, and air force.

“While 100 or more APCs [armored personnel carriers], up to five corvettes, or 14 new fighters may not significantly alter the balance of power with Argentina’s neighbours or in regards to Argentina’s ambitions to take the Falkland Islands (Malvinas),” states Jane’s, “this could also mark the beginning for more substantive Chinese military exports.”

Once the contacts are signed, the Chinese regime and Argentina may exchange military officers, and China may build military field hospitals in Argentina.

The deals could include co-production of military vehicles between the Chinese regime and Argentina.

If Argentina goes through with its programs to co-produce military vehicles with China, says Jane’s, the Chinese regime could get “its first significant military-commercial ‘beachhead’ in Latin America.”

The programs to co-develop military vehicles follows similar deals signed between Argentina and the Chinese regime in 2012. The Chinese regime will build a space tracking and control station in Argentina’s southern Neuquen Province.

According to Jane’s, the space facility will allow the Chinese regime to grow its satellite networks and expand its space programs.

“Argentine sources note that a crucial quid-pro-quo is that Buenos Aires will gain access to strategic information from China’s formidable surveillance satellite constellation,” it states.

The weapons sales to Argentina, coupled with the arms sales from China, according Jane’s, “creates a possible shift in the balance of power in Latin America and increase China’s military influence in the region.”

The Chinese regime is working to expand its influence in Latin America.

Leaders from the 33-country Community of Latin American and Caribbean States (CELAC) met in Beijing in mid-January. During the meeting, the Chinese regime promised to invest $250 billion in Latin America over the next 10 years, and to increase bilateral trade by $500 billion.

The Chinese regime appears to be striking while the iron is hot. Latin American countries are experiencing their lowest economic growth rate since 2009, according to a Jan. 28 report from the Congressional Research Service.

At the same time, notes the report, Latin American countries have become more confident in their ability to solve their own problems, which has led them to be less dependent on the United States. Through this shift, it notes, China “has become a major trading partner for many countries in the region, ranking as one of the top two export and import markets.”

Chinese trade in Latin America has grown from around $18 billion in 2002 to nearly $260 billion in 2013, the report states, although it notes the United States is still the single largest trading partner for many of the countries with close to $846 billion in trade in 2013.

Fact Check Argentina reported after a Dec. 29, 2014, agreement for Chinese investment, that the deal would “subvert Argentina’s labor force in favor of Chinese workers.”

It compared the investment to Chinese programs in Africa, where “Critics say that Beijing is only interested in Africa as a potential wellspring of mineral resources, and that its projects there often benefit governments more than local people.”

In Sri Lanka, there is a similar pushback against the Chinese regime’s investment projects. Recently elected Sri Lankan president Maithripala Sirisena says he hopes to change this dynamic.

Sirisena called the “credit money received from abroad,” which was broadly interpreted as referring to China’s investment, a robbery “taking place before everybody in broad daylight.”

“If this trend continues for another six years our country would become a colony and we would become slaves,” writes Sirisena in his election manifesto.