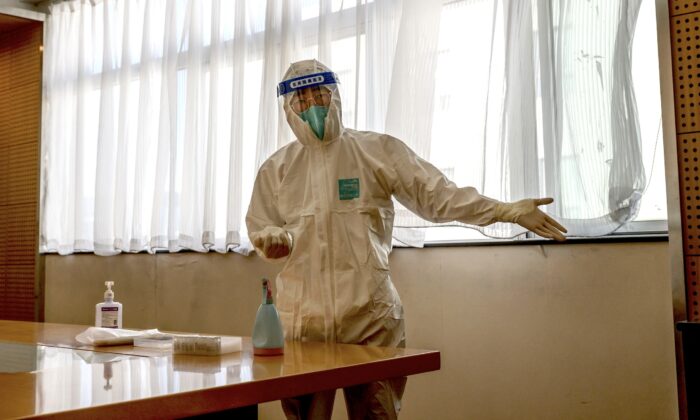 A health worker wears a protective suit as he gestures to a man to sit down at a hotel in Beijing, China, before a COVID-19 nucleic acid test on Oct. 22, 2020. (Kevin Frayer/Getty Images)
US-China Relations

The comments came after some U.S. diplomatic staff stationed in China complained to Washington about having to undergo the intrusive procedure, which Chinese authorities claim to be more superior to nasal or throat testing methods.

“The State Department never agreed to this kind of testing and protested directly to the MFA when we learned that some staff were subject to it,” a State Department spokesperson said in an email to The Epoch Times.

The Chinese foreign ministry has since assured them that the procedure was done in an error and that “diplomatic personnel are exempt from this testing requirement,” the spokesperson said, adding that the State Department “is committed to guaranteeing the safety and security of American diplomats and their families while preserving their dignity.”

“We have instructed staff to decline this test if it is asked of them (as was done in the past).”

The number of American diplomats subjected to the tests remains unclear.

State media have promoted the testing, quoting medical specialists who argued that virus traces could remain in stool samples for a longer time than in the respiratory tract, thus making it more effective in detecting infections.

But the process, at times performed in front of others, has caused alarm among Chinese citizens and foreign tourists, with some saying they would rather not travel to avoid the treatment.

Shocked that they had to take the test upon entry, a few visitors from South Korea called their country’s embassy for help, according to South Korean reports and the Chinese news portal NetEase.

“The children were no exception,” said a Korean citizen, according to Kukmin Ilbo, a South Korean daily newspaper.

They eventually avoided having to undergo the test by providing fecal samples for examination.

“China is no place for you to behave wildly,” the headline of the Chinese article declared of the uncooperative Korean visitors.