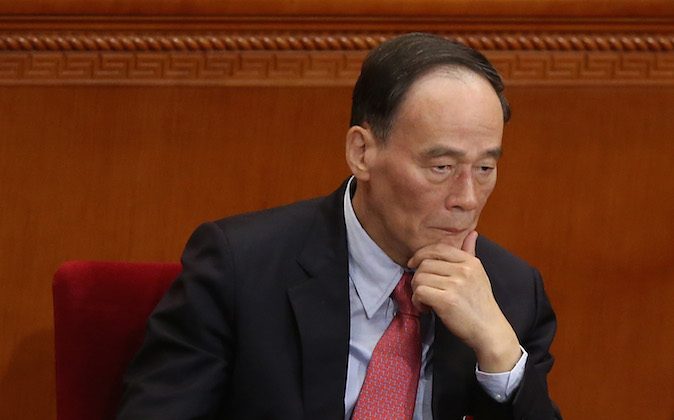 Wang Qishan, a member of the Chinese Communist Party’s Politburo Standing Committee and the head of anti-corruption efforts, attends the opening session of the National People’s Congress (NPC) at the Great Hall of the People on March 5, in Beijing. (Feng Li/Getty Images)
China

Recent comments by the Chinese Communist Party’s top anti-corruption czar indicate that the regime’s campaign against corruption is slowly migrating from a purely domestic focus to the industry-straddling state-owned enterprises listed overseas, according to reports.

Such companies are controlled by the Communist Party but do a large amount of international business, and they are often listed in Hong Kong. Most recently the chairman of the Hong Kong-based China Resources, a top state-owned enterprise, was investigated and dismissed.

Wang Qishan, the head of the Central Discipline Inspection Commission, which is leading the central government’s anti-corruption campaign, gave a harsh speech in a recent meeting with high-level executives of overseas state companies, according to Oriental Daily, a newspaper based in Hong Kong. The remarks were meant to show the Party leadership’s determination to root out corruption, or purge unwanted officials.

Five SOEs (state-owned enterprises) were mentioned as among the next possible targets for investigation, including the Bank of China, China CITIC Bank, Everbright International, and China Merchant Group.

“This time we will launch auditing, inspections, and rectification of corruption in the five large companies,” Wang said, according to Oriental Daily. “We must not retreat in any difficulty, must not leave any corruption out. The Central Discipline and Inspection Commission will sacrifice anything to investigate thoroughly.”

Whether Wang really made those remarks is unclear. Newspapers based in Hong Kong often report alleged internal remarks made by top communists officials, and analysts are frequently divided on the extent to which such reports correspond to things actually said.

Wang was reported to have warned in the meeting that greed and corruption can make officials “insane,” including the offering of confidential political and financial information to foreign governments, or even unscrupulously stealing, the report said.

The reported remarks would follow other recent reported actions by central disciplinary authorities, which include a resolution on April 11 to launch thorough inspections of overseas state companies, including those in Hong Kong and Macau.

Perhaps as a sign of the veracity of The Oriental Daily’s report, or at least a sign of the usefulness of its messaging, the article was widely recirculated on websites in China, including in official media, and in the Party mouthpiece Global Times. Such republishing is common, but in sensitive matters can also be seen as a political weather vane, given that inconvenient reportage is easily squelched.

On April 16, Song Lin, the chairman and party secretary of China Resources, one of China’s biggest state companies, based in Hong Kong, was investigated by anti-corruption officials for “serious violations of law.” Song has become the first high-level Party official in Hong Kong to be taken down in the anti-corruption campaign started last year.

No official accusations have yet been levied against Song, but his arrest was preceded by reports by Chinese journalists alleging he embezzled billions in state funds, and consorted with mistresses (photographs were provided).

An official at a Chinese state enterprise in Hong Kong told Epoch Times that Song is also an ally of former senior official Zeng Qinghong and former Party leader Jiang Zemin. The source, who would not be named because of the dangers of providing such information to the press, said that Song assisted in the 2012 election of the current Hong Kong chief executive, Leung Chun-ying, a pro-Party official. The source was of the view that Song’s downfall is a partial demonstration of Xi Jinping clearing out the influence of Jiang and his allies in Hong Kong.

The complex networks of political patronage and protection may make investigating and eliminating corruption more difficult, however. According to Oriental Daily, nearly 80 percent of the high-level executives at Chinese state enterprises in Hong Kong and Macau, including the five major firms referred to by Wang, include the younger generations of former high-level Communist Party officials.

Chengming Magazine, a politically oriented publication in Hong Kong, echoes such sentiments. Chengming said that the majority of high-level executives in these enterprises held foreign passports, or had U.S. green cards, or even foreign citizenship, though there is no easy way to confirm such allegations. Chengming said that if top executives of these companies worry that they are being brought under investigation, they can simply go abroad and never come back.