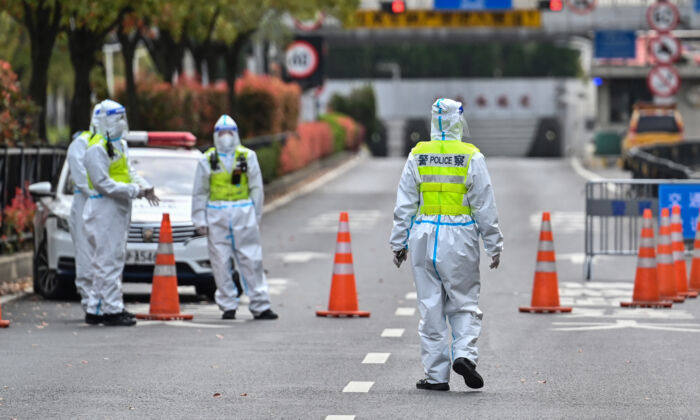 Police officers wearing protective gear control access to a tunnel in the direction of Pudong district in lockdown in Shanghai on March 28, 2022. (HECTOR RETAMAL/AFP via Getty Images)
By Dorothy Li

China’s financial hub of Shanghai announced a two-phased lockdown on March 27, a day after city officials denied they planned a citywide lockdown amid a surge in COVID-19 cases.

Shanghai, one of China’s largest cities with 26 million people, had never implemented a full-scale citywide lockdown since the Chinese regime launched its zero-COVID playbook at the onset of the pandemic in early 2020.

But the current outbreak driven by the highly infectious Omicron variant of the virus appears to have put pressure on local officials to follow other Chinese cities, such as Changchun and Shenzhen, which in recent weeks have gone into lockdown, in imposing strict restrictions.

All residents east of the Huangpu River, which divides Shanghai, are being sealed in their homes from March 28 to April 1 to allow health workers to complete at least two rounds of mass testing, Shanghai authorities said in a notice released on March 27.

The lockdown and mass screenings will move to people living west of the river on April 1, and last until April 5, according to the notice.

Under the lockdown, people aren’t allowed to leave their residential compounds, and public transportation will be suspended. Businesses and firms that aren’t considered essential have been ordered to shut.

Many communities within Shanghai already have been locked down for the past week, with their housing compounds blocked off with blue and yellow plastic barriers and residents required to submit to multiple tests for COVID-19.

However, Shanghai officials repeatedly had denied that the entire city would be locked down.

“We can’t [lock the city down],” Wu Fan, an expert member of the city’s pandemic task force, told reporters at a March 26 press briefing. “Our city plays an important role in the national economic and social development, and even affects the global economy.”

Uncertainty over COVID rules have sent Shanghai residents scrambling to stockpile food and other daily necessities, leaving shelves empty across the city.

“Everything in our store has been sold out. Frozen food, vegetables, instant noodles…are all gone, even crisps, eggs, and meat were gone,” an owner of a shop in Pudong New District told The Epoch Times.

Infections in Shanghai continued to surge in recent days, hitting a record of 3,500 new COVID cases on March 28. However, the official figure likely doesn’t reflect the true total, according to experts and local residents, given that the Chinese regime is known to grossly underreport its virus numbers in a bid to control the flow of information deemed harmful to Beijing’s image.

All infected individuals, including 3,450 with mild or no symptoms, are in isolation facilities, the director of the city’s health commission said at a March 28 press conference. Shanghai has also converted two gymnasiums, an exhibition hall, and other facilities to house potentially infected patients.

The strict measures will likely disrupt economic activities in the city, even as some companies are allowed to continue operations within a “closed loop system” for the duration of the lockdown.

Tesla said production at its factories in Shanghai would be suspended for four days, Reuters reported, citing unnamed sources.

Hong Ning and The Associated Press contributed to the report.

Why Are There No Lower Age Limits for Puberty Blockers, Hormones, and Gender-Transition Surgeries?—Dr. Miriam Grossman | PART 2
sharecomments