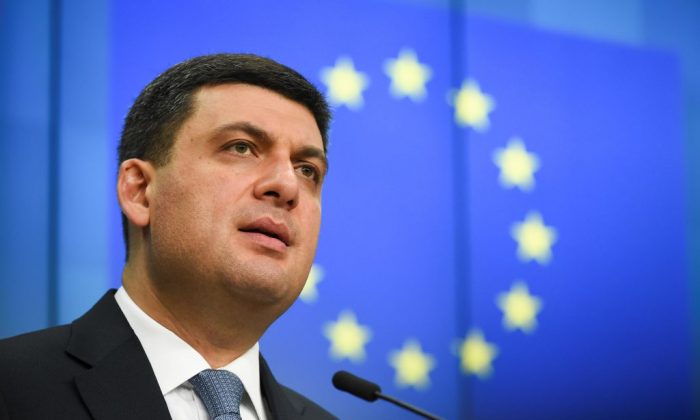 After years of relying on Soviet space technology, China now turns to Ukraine to fulfill its space ambition, according to Ukrainian media.

The country’s local broadcaster Channel 24 reported Jan. 18 that Ukranian-Chinese cooperation in the space sector is now gaining momentum, with much of it centered around its state-owned designer of satellites and rockets, the Yuzhnoye State Design Office.

“How will the White House react, if soon, China will land on the Moon with the help of Soviet technology sold by Ukraine?” the report asked.

The report stated that U.S. officials have expressed concerns about close business ties with China, accusing Ukraine of “betrayal and have threatened sanctions.”

The alarm went off after the Washington Times first reported in August 2018 that Chinese jet trainers JL-10—used for training Chinese pilots how to land on aircraft carriers—were being powered by engines supplied by Ukrainian engine manufacturer Motor Sich.

In September 2018, Ukraine’s local newspaper Kyiv Post reported that an unnamed U.S. Pentagon official visited Ukraine to warn of the dangers of Chinese investments in Ukraine.

The official stated that Beijing wanted to “scoop up know-how by transferring manufacturing to China” and “import [Ukraine’s] defense industry production so [China] can reverse-engineer and produce [the technology].”

Yuzhnoye, formerly known as OKB-586 and the Yuzhnoye Design Bureau, was founded in 1954 under the Soviet Union and led by former leading Soviet missile designer Mikhail Yangel. The organization developed and manufactured the Soviet Union’s intermediate-range ballistic missile R-12. The deployment of these missiles led to the 1962 Cuban Missile Crisis.

After the Soviet Union fell apart, Yuzhnoye was controlled by Ukraine. In 1999, Ukraine successfully launched the Dnepr rocket designed by Yuzhnoye, a space launch vehicle converted from the ballistic missile R-36.

In recent years, the company has worked with China on multiple projects.

In September 2013, during the 64th International Astronautical Congress in Beijing, Yuzhnoye General Director Alexander Degtyarev announced that the company was in discussion with Beijing about the possibility of cooperation in lunar exploration, according to Ukraine’s official space web portal. He added that there were contracts between the two sides already being implemented.

In May 2017, Li Ping, director of China’s state-run Xi’an Aerospace Propulsion Institute, attended roundtable meetings at the sidelines of an international space conference called “Space Technologies: Present and Future” co-organized by Yuzhnoye and held in the Ukrainian city of Dnipro, according to a press release on the company’s website.

Development of the lander had been shelved by the Soviet Union after the United States put astronauts on the moon in 1969. Under the new agreement with China, Ukraine would supply the design document for the propulsion system, but the hardware would remain in Ukraine.

“In the future, Ukrainians might assist the Chinese in organizing the production of the technology in China,” Popular Mechanics reported.

The sources also said that China would use the rebuilt propulsion system to build a larger lunar lander, with the goal of carrying two or three Chinese astronauts to the moon.

In November 2018, Yuzhnoye took part in the annual aircraft and aerospace trade expo, the Airshow China, held in Zhuhai City in southern China’s Guangdong Province. On the company’s official website, Yuzhnoye said it had aerospace products including rocket and aviation engines on display.

In 2011, the two countries established the Commission for Cooperation to develop bilateral cooperation in space, science, technology, and medicine, according to the official website of Ukraine’s embassy in China. A special subcommission was created to encourage developments in space.

In November 2018, Pavlo Degtyarenko, head of Ukraine’s state space agency, met with Zhang Kejian, director of the China National Space Administration, at a subcommission meeting held in Beijing, where the two sides agree to expand the number of space cooperation projects to 80. They also agreed to future cooperation in space debris monitoring and researching of deep space.

China has relied on Ukraine for many other military technologies. Most notable is Ukraine’s sale of a partially completed aircraft carrier in 1998 to China, which the Chinese regime converted into its first modern aircraft carrier, the Liaoning. It was launched in 2012.

The Telegraph reported that in 2001, Ukrainian and Russian businessmen sold Soviet-era X-55 cruise missiles, which had a range of 1,800 miles, to China from Ukraine’s missile stockpiles.

Ukraine also helped develop China’s indigenous phased-array radar system, according to a November 2017 article published by Tokyo-based magazine The Diplomat. The radar system, which allows constant watch over a target, is the Chinese equivalent of the U.S. Aegis combat system.

And in 2017, private aeronautical engine company Beijing Skyrizon Aviation and Ukrainian firm Motor Sich agreed to set up a Chinese assembly and servicing plant to manufacture aircraft engines in the southwestern city of Chongqing. In November 2018, Chinese news portal Sina reported that first-phase construction of the plant was complete.

According to an unconfirmed report published on multiple Chinese news sites, including Chinese news portal Sohu, about 3,000 scientists, engineers, and other technicians from Ukraine would relocate to China along with their families in relation to the Chongqing plant.

“Chinese poaching of Ukrainian aerospace, tank, and naval engineers” is becoming common, stated the American bimonthly magazine National Interest in an article published June 2018. The article mentioned the prominent example of Valerii Babich, the original designer of the Liaoning aircraft carrier, when the ship was first launched in Ukraine—under the name Varyag—in 1988.

In September 2017, Chinese media The Paper reported that Babich had been hired by the Qingdao City-based China-Ukraine Special Ships Research and Design Academy (CUSA).

CUSA is a research and development collaboration founded in September 2014 by the Qingdao municipal government, the state-run Shandong Province Academy of Sciences, and a Ukrainian shipyard, according to The Paper.

The number of Ukrainian expats hired to work for Chinese firms is significant enough that there are rumors of “Ukrainetowns” in some Chinese cities, the magazine reported.