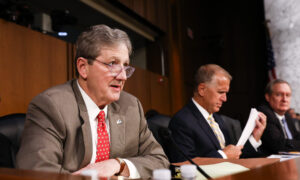 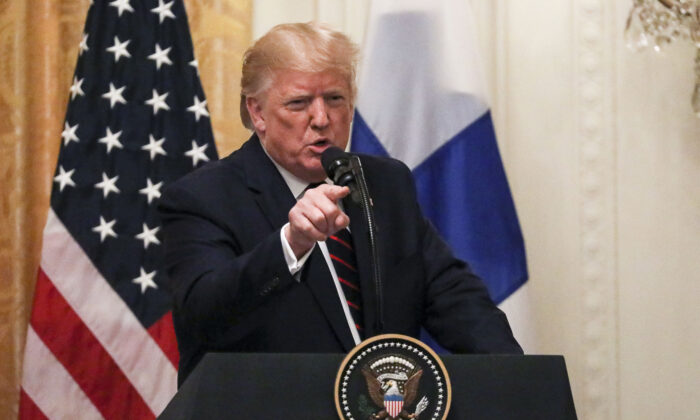 President Donald Trump at a press conference in the East Room of the White House in Washington on Oct. 2, 2019. (Charlotte Cuthbertson/The Epoch Times)
Trump Administration

China and Ukraine Should Investigate the Bidens: Trump

The younger Biden sat on the board the Ukrainian energy company Burisma from 2014 to 2019 and he is still active with an investment company in China, Boah Harvest RST, which reportedly invested in surveillance technology used to spy on Muslims in the country.

Speaking to reporters before departing Washington on Oct. 3, Trump told them that Ukraine and China should investigate the Bidens.

“I would think if they were honest about it they would start a major investigation into the Bidens. It’s a very simple answer. They should investigate the Bidens,” Trump said when asked whether Ukraine should probe the Bidens.

Asked if he asked Chinese President Xi Jinping to help probe the Bidens, Trump replied: “I haven’t, but it’s certainly something we can start thinking about because I’m sure that President Xi does not like being under that kind of scrutiny where billions of dollars is taken out of his country by a guy that just got kicked out of the Navy. He got kicked out of the Navy, all of a sudden he’s getting billions of dollars. You know what they call that? They call that a payoff.”

“I would say [Ukrainian] President [Volodymy] Zelensky, if it was me, I would start an investigation into the Bidens because nobody has any doubt that they weren’t crooked,” he also said. “He had no knowledge of energy, didn’t know the first thing about it, all of a sudden he’s getting $50,000 a month plus a lot of other things,” Trump said, continuing to speak about Hunter Biden.

Trump’s July phone call with Zelensky came under intense scrutiny after a person who has not been publicly identified filed a complaint alleging Trump abused the office of the president by pressuring Zelensky to probe Biden, a 2020 contender, over the former vice president’s past actions in Ukraine. Trump asked Zelensky to look into the Bidens during the call but Zelensky has told reporters he did not feel “pushed” to do so.

Biden admitted last year that he pressured in 2016 then-Ukrainian President Petro Poroshenko to oust a prosecutor who was probing Burisma.

House Democrats are currently carrying out an impeachment inquiry against Trump that was spurred by the complaint. Rep. Adam Schiff (D-Calif.), who is leading the inquiry, said late Wednesday that he regretted making a statement last month that his staffers didn’t speak with the whistleblower when it emerged that they actually did.

Joe Biden, meanwhile, slammed Trump during a speech in Nevada, saying the president is trying to smear him with the repeated references to his and his son’s actions.

“You’re not going to destroy me,” he said.

“What I did in Ukraine was carry out the official policy of the United States government. To root out corruption in Ukraine in conjunction with our European allies, the International Monetary Fund and its leader, our closest Democratic allies, and the courageous reformers in Ukraine,” Biden said.

“This was a fully transparent policy carried out in front of the whole world and fully embraced by the international community of democracies.”