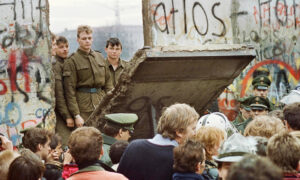 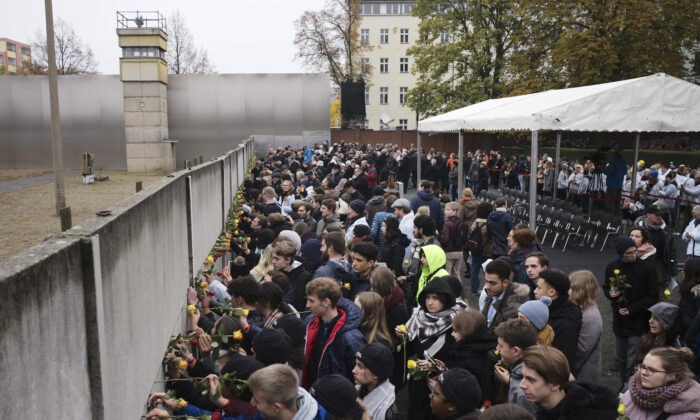 Young people stuck flowers in remains of the Berlin Wall during a commemoration ceremony to celebrate the 30th anniversary of the fall of the Berlin Wall at the Wall memorial site at Bernauer Strasse in Berlin, Nov. 9, 2019. (Markus Schreiber/AP Photo)
Viewpoints

China and the Fall of the Berlin Wall

Thirty years ago, I was an eyewitness to history, as jubilant East Germans danced on the Berlin Wall and took their first awe-eyed steps into freedom. I led the “Berlin Wall Freedom Expedition” to meet East Germans discovering their new life of liberty, and to march with them in a massive rally for freedom.

History records that the Berlin Wall fell, and like dominoes, so too did the eastern European dictatorships and then the Soviet Union. With miraculously little bloodshed. I stood on the blood-stained steps in Timisoara Romania where dictator Ceaușescu’s troops failed to crush the spirits of demonstrators.

But why? After all, it took World War II to remove the bloody Axis regimes of Nazi Germany, Imperial Japan and Fascist Italy, yet the Soviet empire evaporated to dust in just two years.

In the mid-1980s, the Soviet Union was at their pinnacle of worldwide expansion and power. They directed Communist revolutionary forces around the world, built terrifying weapons and maintained an iron grip on their homeland. They seemed as eternal as the pyramids.

President Reagan famously joked “Here’s my strategy on the Cold War: we win, they lose,” but back of that was a multi-level strategy that rejected ‘Kissingerian’ appeasement with a determined effort to destroy the power of the Soviet Union.

Economically, Reagan gained the cooperation of the Saudis to crash the price of oil, thus robbing the Soviets of much of their foreign revenue. Militarily, his rapid modernization of our armed forces forced the Soviets to bankrupt themselves in trying to keep up, and his initial development of missile defense may have been the final straw. At the time (pre WTO and NAFTA), we still manufactured virtually everything and harnessed our immense industrial capability to rebuild our military in years, not the decades it may take today.

The final Soviet dictator, Mikhail Gorbachev was forced onto the defensive, and talked of “perestroika” (restructuring) and “glasnost” (openness) along with fighting corruption to make it appear he was following the public demand for freedom. Yet, Gorbachev only slightly relaxed the dictatorial hold on the Soviet people.

I do not believe Gorbachev intended his empire to collapse, but unwittingly and unknowingly opened an avenue to the collapse that faintly echoed President Reagan’s famous “tear down this wall” speech and the messages and inspiration of Pope John Paul II. Unlike today, our NATO and other allies were firmly supportive and willing to defend their liberty, presenting a resolute rear guard to Reagan’s strategy.

What dealt the actual final blow to the Soviet empire could be described as “rising expectations.” This principle, well known in foreign policy and psychology, is what in the months leading up to the fall of the Berlin Wall motivated eastern European leaders to loosen and remove border barriers, and inspired people to cross into western Europe. And it is what made people rush to the Wall on November 9, 1989. And it is what made the East German regime afraid to fire the guns on that wondrous day.

Once the horses had left the barn, it was too late to close the gate, and this tidal wave of a sense of freedom swept the Communist regimes to the scrapheap of history. It may be that the Soviet leadership was too demoralized and overwhelmed to order the genocidal crackdown that would have been necessary to restore their tyranny.

This sense of rising expectations was felt halfway around the world in China, filling Tiananmen Square and cities across China with millions demanding their freedom. They almost succeeded.

Today, Hong Kong citizens are experiencing a similar sense of popular rebellion. Millions fill the streets and disrupt official activities in a desperate move to protect their precious freedom. The difference is that this uprising follows the corollary principle of “crushed expectations.” Both rising and crushed expectations have each historically sparked popular revolutions.

The world watched this in 2009 as the Iranian people reacted to the stolen presidential election by taking to the streets in protest. The regime was frozen for many days, expecting President Obama would rally our allies in public support of the people. The Iranian crackdown occurred only after Obama made it clear he sided with the dictatorship and turned his back on the people.

What Hongkongers (香港人) are rallying together for is opposing the bill (since withdrawn) which would have allowed Communist China to extradite Hong Kong citizens to China, which would allow Beijing to send many to China’s Laogai (concentration camps), prison or to be executed. This was crushed expectations that their freedom protected under the “Basic Law of the Hong Kong Special Administrative Region” was suddenly endangered.

Beijing’s top fear is of a “colored revolution,” like the “Orange revolution” in Ukraine or the “Green Movement” in Iran, Juan Guaido’s almost successful revolution in Venezuela and even the ill-fated “Arab Spring,” all of which were examples of rising expectations sparking popular revolutionary movements.

The answer to Beijing’s thugs and princelings on the anniversary of the Berlin Wall’s demise is, “you ain’t seen nothing yet!”

Regardless of whether Hong Kong’s popular revolution will spread to China, the end of the Communist regime is only a matter of time. It’s basic human nature.

Why? Rising–or crushed–expectations will one day spark the colored revolution Xi Jinping most fears. And the date will join in the annals of human freedom with the honored dates of the fall of the Berlin Wall, “V-E” Day and “V-J” Day in World War II and Armistice Day in World War I.

On this thirtieth anniversary of the greatest end to tyranny in history, let’s look forward. To a China that throws off their Communist dictators. And to regimes in Iran, North Korea, Venezuela, Cuba, and other tyrannies that crumble to popular revolts. And to a future where human freedom is no longer an endangered species, but the established and cherished norm around the world.

Art Harman is the President of the Coalition to Save Manned Space Exploration. He was the Legislative Director and foreign policy advisor for Rep. Stockman (R-Texas) in the 113th Congress, and is a veteran policy analyst and grass-roots political expert.

Art Harman
Follow
Art Harman is the president of the Coalition to Save Manned Space Exploration. He was the legislative director and foreign policy advisor for Rep. Stockman (R-Texas) in the 113th Congress, and is a veteran policy analyst and grass-roots political expert.
TOP NEWS