China and Russia Want to Replace US Dollar With BRICS Currencies 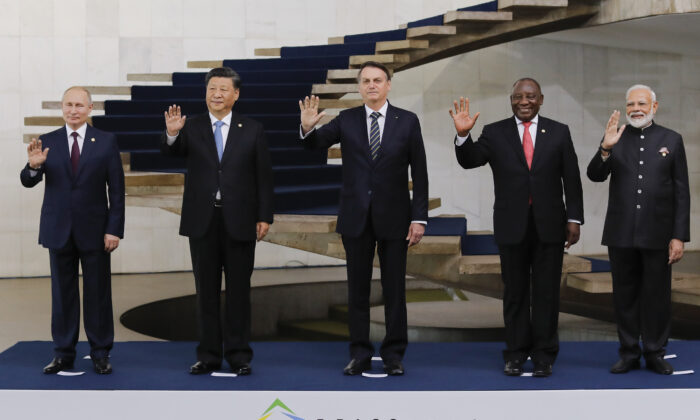 The BRICS—an acronym for Brazil, Russia, India, China, and South Africa—held a summit on June 23. The meeting, chaired by Chinese leader Xi Jinping, was part of a lengthy series of BRICS cooperation events, which began on June 6 with the second finance ministers and central bank governors meeting and ended with the second meeting of the committee of senior energy officials on June 28.

In his opening remarks, Xi stated, “We should also expand BRICS cooperation on cross-border payment and credit rating to facilitate trade, investment, and financing among our countries.”

He went on to reaffirm the Chinese Communist Party’s (CCP) commitment to working together with the BRICS nations to achieve the CCP dream of the Global Development Initiative (GDI).

Chinese Foreign Minister Wang Yi presented the GDI to the United Nations in April 2022 as a CCP-led global development initiative. It was welcomed by the U.N. and has received messages of support from 100 nations. The Group of Friends of the GNI was established on the U.N. platform. So far, more than 50 countries have joined. Ostensibly, utilizing a China-led, non-dollar payment system would help facilitate the development the CCP is calling for.

The XIV BRICS Summit Beijing Declaration issued on June 23, which establishes the goals for the coming year, includes continued collaboration on “the BRICS Payments Task Force (BPTF) as a platform for exchanging experience and knowledge, and welcomes the central banks’ further cooperation on the payments track.”

Both Xi and Russian President Vladimir Putin called for payment alternatives to decrease the U.S. dollar’s dominance in international trade and to reduce U.S. control of the SWIFT system.

According to the Chinese state-run tabloid Global Times, bankers and economists in BRICS countries have recommended that the bloc “expand national currency settlements and lending to counter the US’ weaponization of the dollar.”

The Russian news agency TASS reported on June 22 that in Putin’s address at the BRICS forum, he called for developing an international reserve currency based on a basket of currencies.

Sergey Storchak, chief banker of Russian bank VEB.RF, told Global Times on June 21, “The BRICS and other interested nations need to talk about setting up their own independent global financial system – whether it would be based on the Chinese currency or they will agree on something different.” VERB.RF is one of the sanctioned entities that has been excluded from the U.S. SWIFT international payment system.

Xi, Putin, and the bankers from VEB.RF have three basic complaints regarding currency. They resent the dominance of the U.S. dollar as a reserve currency. They do not want the dollar to be the currency of international settlement. And they are threatened by the necessity to transact international payments through the U.S. SWIFT system, which depends on U.S. banks.

The reason why countries use the U.S. dollar in the international settlement is because commodities such as oil are priced in dollars, and because the dollar is a stable currency that is readily convertible everywhere in the world. None of the BRICS currencies are considered fully convertible. The Chinese yuan is a reserve drawing rights (SDR) currency of the International Monetary Fund (IMF), officially making it an international currency, but even the yuan has limited convertibility.

Central banks around the world hold U.S. dollars as a major part of their foreign currency reserves not only due to the stability and convertibility of the dollar, but also because of its usefulness in settling international trade. The South African rand, the Brazilian real, the Indian rupee, and the Russian ruble are all relatively weak currencies; therefore, other countries do not wish to hold these as reserves.

If international settlement agreements could be reached among BRICS countries, the BRICS currencies would only be useful in trade with the originating nation. In other words, while South Africa and India may agree to settle trade in rupees, it is unlikely that other nations would accept rupees in trade with South Africa. Furthermore, several of the BRICS countries carry a large amount of foreign debt, which must be serviced in U.S. dollars, not rupees.

International traders use the U.S. SWIFT system to process cross-border payments because it is safe, fast, and accurate. Most importantly, it is convenient as it connects with major banks in over 100 nations. China and Russia have attempted to build SWIFT alternatives, but neither system connects with banks in Western nations.

Consequently, unless the world agrees to use the Chinese or Russian system, the BRICS nations will depend on the SWIFT. And even if a Chinese or Russian payment system is agreed upon, there would still be the problem of which currency to use for international trade.

Arguably, the Chinese yuan would be the most logical currency for the BRICS nations to use for internal trade. Currently, the Chinese Cross-Border Interbank Payment System (CIPS) is set up to handle trade in yuan. But by agreeing to conduct business in yuan and through the CIPS, the other BRICS nations would be ceding U.S. control of their cross-border trade for CCP control, which they may not be comfortable with.