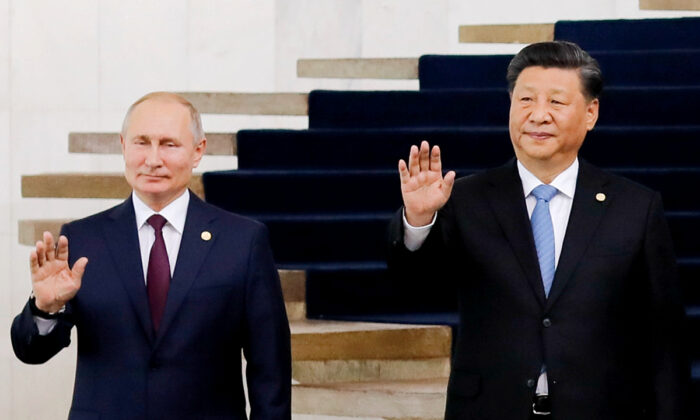 China and Russia aim to lead the world towards a new international order, according to one of the Chinese Communist Party’s (CCP) highest-ranking diplomats.

“The Chinese side is willing to work with the Russian side to continuously implement high-level strategic cooperation between the two countries, safeguard common interests, and promote the development of the international order in a more just and reasonable direction,” said CCP Politburo member Yang Jiechi, according to a statement by the Foreign Ministry.

“The relationship between the two countries has always been on the right track, and both sides firmly support each other on issues relating to their core interests.”

Yang delivered the comments during a Sep. 12 meeting with Russian Ambassador Andrey Denisov in Beijing. In official statements, the Chinese regime regularly uses propaganda describing an attempt to achieve a “fairer” and “more just” international order, which Western officials and analysts note is an oblique critique of the U.S.-led rules-based global order that the CCP seeks to undermine and ultimately replace with one that is hospitable to the regime’s authoritarianism.

The comment came closely behind similar remarks made by the CCP’s third-in-command, Li Zhanshu, in which he explicitly approved of the war in Ukraine and assured Russia it would receive Chinese support.

“China understands and supports Russia on issues that represent its vital interests, in particular on the situation in Ukraine,” Li said, according to Russia’s State Duma. The quote was not corroborated by China’s statement of the event.

The CCP has thus far presented a veneer of neutrality on the issue of Ukraine, repeatedly defending Russia’s invasion and blaming NATO for the war while stopping short of providing direct military aid that could draw international sanctions upon itself.

Russian President Vladimir Putin and CCP General Secretary Xi Jinping will meet later this week on the sidelines of a regional security summit in Uzbekistan. It will be the first time the two leaders have met in person since February, when they declared a “no limits” partnership in Beijing, a mere weeks before the Ukraine invasion.

Kremlin aide Yuri Ushakov announced the meeting at a Sep. 13 briefing in Moscow, saying that the two leaders would discuss issues of geostrategic significance, including Taiwan and Ukraine.

“China has taken a well-balanced approach to the Ukrainian crisis, clearly expressing its understanding of the reasons that prompted Russia to launch the special military operation,” Ushakov said. “The issue will be thoroughly discussed during the meeting.”

Ushakov added that the meeting would hold “special significance” for the two leaders.

Russian forces have suffered a string of setbacks in Ukraine in recent weeks, losing ground to a surprise Ukrainian offensive. The nation is still responsible for more than 40 percent of Europe’s natural gas supply, however, so it may leverage that fact to encourage Western nations to let up on sanctions that are hampering its war effort.

The Putin-Xi meeting is thus crucial to the ambitions of both leaders. For Russia, it presents the opportunity to demonstrate to the world that it is not isolated. For China, it means the chance to champion an alternative international system to the rules-based international order.

Combined, the two regimes aim to counter the liberal international order, analysts note, and to achieve a state of global affairs in which both can expand their interests without fear of repercussion from the United States and its allies.