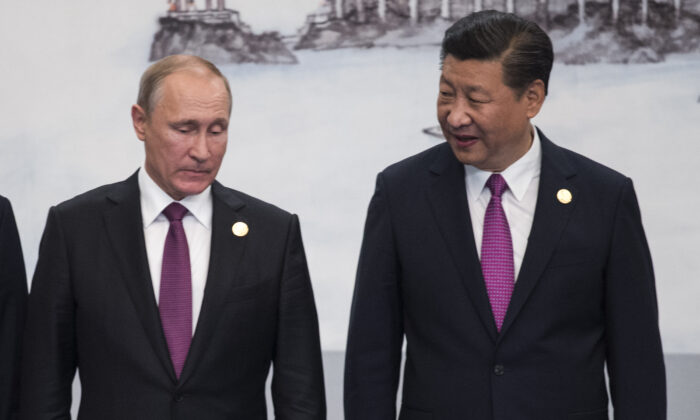 The news that Sinopec, China’s state-run oil refiner, has canceled plans for a half-billion-dollar investment in Russia’s energy sector does not portend a general decoupling of the economies of China and Russia.

On the contrary, it signifies a temporary halt to an economic partnership that is likely to grow in size and complexity as world powers regroup into new, rival blocs in the aftermath of Russia’s invasion of Ukraine and the massive sanctions that aligned nations have levied on the aggressor.

That’s according to Ross Kennedy, a senior fellow at the Securities Studies Group and founder of Fortis Analysis, who spoke to EpochTV’s “China Insider” program on April 2.

A few weeks prior to Russia’s invasion, Chinese leader Xi Jinping and Russian President Vladimir Putin announced a “no limits” partnership, a relationship that has not shown signs of diminishing even as Moscow becomes a pariah on the world stage over its ongoing assault on Ukraine. But Beijing has not yet rushed in to provide significant economic help to Moscow, cautious about being impacted by Western sanctions in the process, according to Kennedy, a logistics and supply chain expert.

“Beijing, despite declaring pretty forcefully and openly that there are no limits on ties between Moscow and Beijing, still also has to take into consideration what the impact of sanctions may be. And right now there’s a bit of a gray area [concerning] how capital flow is going to work between the two countries, particularly on the investment side,” Kennedy said.

Calling China a “consumption powerhouse” that continues to need enormous amounts of energy and raw materials, Kennedy said that the availability and ease of goods produced in the Black Sea region and the eastern part of Russia still holds significant appeal for Beijing. Though China’s rulers are wary for the moment about what contravening the sanctions on Russia might mean for China’s economy. Hence Kennedy is skeptical about the long-term significance of Sinopec’s decision.

“I don’t think this is an indicator that China is cooling its support of Russia. I don’t think that it is really reflective of anything other than Sinopec, and other companies, being instructed by Beijing to just be a little bit more cautious right now and make sure that state-owned enterprises don’t have exposure to Western sanctions,” he said.

Despite the Sinopec decision, trade is still ongoing at a high volume between the two powers in such product groups as animal feed, vitamins and trace minerals, amino acids, building and construction materials, and other longstanding components of the Russia-China trade relationship, Kennedy said.

Rather than a decoupling, Kennedy sees the likelihood of Chinese state-owned enterprises ramping up their purchases of energy products and grain from Russia. In Kennedy’s analysis, China, India, and possibly other powers will take advantage of the lower prices of energy products available to be shipped by tanker from Russia as the latter power increasingly finds itself shut off from Western markets. A marked increase in non-dollar- and non-Euro-denominated transactions is highly likely, he added.

“It’s pretty clear that Moscow and Beijing and even some of the other countries of the world, like India and Iran, are working and collaborating pretty closely on having the ability to settle transactions among themselves,” Kennedy said.

The increasing reliance on transactions that do not involve Western currencies or banking systems takes place under the rubric of BRICS, the group of powers composed of Russia, China, India, Brazil, and South Africa. Kennedy sees BRICS as the nexus of this growing consolidation and formation of a bloc rivaling Western democracies.

Besides the devastation of Ukraine and the imposition of massive sanctions, Russia’s invasion of her neighbor has helped start to usher in a new geopolitical landscape. The new bloc will not emerge overnight. Rather, it is in nascent form, Kennedy said.

“We are seeing the emergence of Russia-China-led sphere of economic and geopolitical cooperation that will stand in contrast to what is more of an Anglosphere, or a transatlantic type of alliance among Canada, the U.S., and our NATO partners,” Kennedy said.

“I think as we look back in three years, five years, ten years, we’re going to see that it’s really two fully formed economic blocs that have some level of cooperation between them where necessary,” he continued.

To the extent that trade and cooperation occur between the rival blocs, it will depend on facilitators that have a presence in both blocs, such as India, Saudi Arabia, and possibly the United Arab Emirates, Kennedy predicted. He called the new geopolitical configuration unprecedented since the days of the Cold War, when the world broke down largely of the Soviet Union, Western powers led by the United States, and a number of developing countries loyal to one or the other.