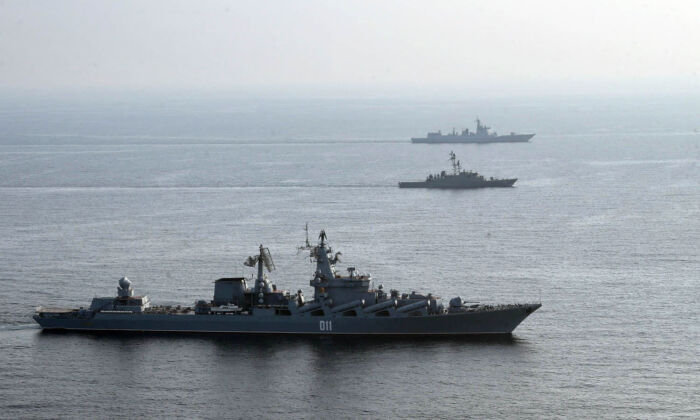 China and Pakistan announced the commencement of live-fire military drills July 11, coinciding with drills currently being conducted by the United States and its allies.

The joint exercises, dubbed Sea Guardians 2, began at the Wusong military port in Shanghai and will continue through July 13.

The exercise is the second of the China-Pakistan Sea Guardians series of exercises. The first was conducted in the Arabian Sea in early 2020 near Pakistan’s city of Karachi.

China’s Navy said that Sea Guardians was designed to “further strengthen both sides’ ability to jointly handle security threats at sea,” according to Chinese state-run media.

Sea Guardians 2 will take place in both the water and airspace around Shanghai, and both Chinese and Pakistani forces will conduct live-fire exercises for maritime strikes, tactical maneuvers, anti-submarine operations, and practice supporting damaged vessels.

State-owned media outlet China Daily said that the Chinese troops involved in the exercise were largely drawn from the Eastern Theater Command, which is one of China’s five military commands. The command includes the province of Fujian, directly adjacent to Taiwan.

Chinese forces involved in the exercises include two guided-missile frigates, a supply ship, a submarine, an early warning aircraft, two fighter jets, and a helicopter. Pakistan will be operating a military frigate manufactured in China last month.

China and US in Dueling Drills

China’s military, the People’s Liberation Army, said that the exercise did not target a third party or reference any ongoing struggles. Likewise, state-owned media outlet Xinhua said that the effort would “enhance defense cooperation, exchange expertise and experience,” and was meant to develop “all-weather strategic cooperative partnership.”

Nevertheless, observers have said that the drills are likely intended to improve China’s capacity to counter the United States and its allies in the Indo-Pacific, where both nations are currently trying to curry favor with regional powers in support of their ongoing competition.

To that end, China’s engagement with Pakistan, much like its engagement with Iran, could prove to be a key part of the regime’s long-term strategy for contending with India to the south, which has become more closely aligned with the United States over the last several years.

Relatedly, the United States and India are currently engaged in the U.S.-led Rim of the Pacific (RIMPAC) exercises, which began June 30 and will continue through Aug. 4.

RIMPAC is the world’s largest international maritime exercise. This year’s exercise involves 26 nations that will conduct drills near Hawaii and California.

Notably, China participated in the exercise until 2018, when it was disinvited as a result of China’s illegal efforts to expand its territory in the South China Sea.

Congress requested that the Biden administration invite Taiwan to the exercise in 2022. The administration ultimately did not invite Taiwan, however, possibly in response to the increasingly bellicose rhetoric of China’s communist regime, which has repeatedly said it was ready to go to war to prevent Taiwan’s recognition as an independent nation.