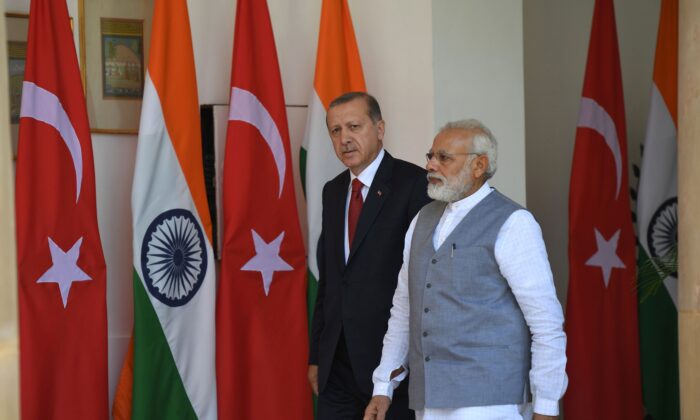 Indian Prime Minister Narendra Modi (R) walks with Turkish President Recep Tayyip Erdogan prior to a meeting and exchange of agreements in New Delhi on May 1, 2017. (PRAKASH SINGH/AFP via Getty Images)
India

China and India Compete in Relations With Turkey and Iran

Following on the bloody Galwan border incident on June 15 in which Chinese and Indian soldiers died, China and India appear to be recalibrating their relationship in multiple ways. In the Middle East, China has recently supplanted India in relations with Turkey and Iran.

Around the same time that tensions reached a peak following the Galwan incident, Iran finalized a 25-year strategic partnership deal with China worth $400 billion. A month later, Iran decided to end a 2016 deal with India for a rail project linking its Chabahar port with Afghanistan, citing a funding delay from India.

During this time of pandemic, Turkey, a key player in the Middle East and the land bridge between the Middle East and Europe, has increasingly looked to the Chinese regime for investments and foreign currency reserves. The two countries had signed a $1 billion currency swap arrangement in 2019, and in June, Turkey used $400 million of this funding facility extended by China’s Central bank. The country is also an important component of China’s Belt and Road Initiative connecting Eurasia.

India’s relationship with Turkey has also deteriorated in recent months because of Ankara siding with Pakistan against India over the disputed region of Kashmir.

Turkish President Recep Tayyip Erdogan, during a visit to Pakistan in February, had compared the situation in Kashmir with that of the people of Turkey during World War I and had guaranteed support to Pakistan’s stand on the matter.

The Indian government was quick to criticize Erdogan for it in an official press release.

“These remarks reflect neither an understanding of history nor of the conduct of diplomacy. They distort events of the past to advance a narrow-minded view of the present. India made a strong demarche with the Turkish Government,” the spokesperson of the Indian Ministry of External Affairs said in a statement.

Experts say these developments and relationships are deals of convenience and can’t strategically constrain the United States in the region and will also not stop the positive and constructive role India is set to play in the region.

Manjari Singh, associate fellow at the Centre for Land Warfare Studies, told The Epoch Times over the phone from New Delhi that the emerging geopolitical situation in the Middle East involving India and China is based on multiple factors.

“It is a need-based arrangement and interest-driven one, wherein economics, investments, and trade are guiding factors. Today, every country engages with every other country based on their interests. No relation is based on a single factor. This is a similar situation,” she said, adding that China’s growing influence in the Arab countries is more of a concern for India than for others in the region.

James Carafano, an expert in national security and foreign policy at The Heritage Foundation in Washington, told The Epoch Times in an email that India’s relationships in the region are beyond Iran, and “it remains to be seen” how India’s strategic partnership with the United States in the Indo-Pacific has impacted its status in the Middle East.

“India has made a strategic shift to expand its relations in the region beyond the prism of its dealing with Iran. The U.S. sees this as positive, and supports and encourages. India can only play a positive and constructive role,” Carafano said.

India Versus China in Iran

The deterioration of the India–Iran relationship is widely said in the Indian media to be due to India delaying funding for a rail project that linked Iran’s Chabahar port to Afghanistan.

Chabahar is a strategic port for India that connects it with Central Asia and Afghanistan, bypassing Pakistan, and it lies in a free-trade zone. India signed a deal with Iran to build a railway from the port to Zahedan, near Afghanistan, in May 2016 and invested $500 million when the project’s first phase was inaugurated in December 2017.

However, the Iranian government decided to leave India behind and instead invest $400 million from the Iranian National Development Fund, according to the Indian media outlet Scroll.

The Iranian government expressed in a missive its disappointment to the Indian government about the delay of funds, silently accusing it of fearing sanctions by the United States, according to the International Railway Journal.

“No third party’s measures or restrictive policies such as unjust unilateral sanctions should be allowed to hamper the historical cordial relations between India and Iran,” said the Iranian government.

The U.S. government had provided a waiver of sanctions for the project. But the Iranian government has found it difficult to find equipment suppliers, and potential partners have feared being targeted by U.S. officials, reported Indian national newspaper The Hindu.

Confusion persisted in the media on the matter, as later, the Iran Railways head Saeed Rasouli called for a review with India of the project and said the news that India was being excluded was the work of vested interests, according to a message on Twitter by the Embassy of India in Tehran.

Carafano said that Iran would be a “loser” if it struck India out of the deal because “India would bring more business and real growth.”

Esra Serim, a Turkish analyst based in France, told The Epoch Times in an email that the railway project is Iran’s tool of accession and presence in Afghanistan, and India’s presence in the war-torn country could be seen as a challenge by both Iran and Pakistan.

She believes Iran’s behavior has China behind it. “In actual fact, China never wanted India to be in this critical/geostrategic project,” Serim said.

India Versus China in Turkey

Serim said that Turkey has started to get closer to China and started to be estranged from the rest of the world, particularly from the European Union and the United States.

“As a natural consequence, Ankara is turning to China for investments, trade, and foreign currency reserves as well as the rich countries in the Middle East such as Qatar,” said Serim.

She emphasized, however, that Turkey’s relations with India have deteriorated because of Turkey’s stand on Kashmir.

“Interestingly, Ankara has still been staying silent on the Turkic Muslim Uyghurs native to China’s Xinjiang region despite the similarity of the Muslim community situation in Kashmir. This shows us that China’s rising power in the Middle East is of no small matter,” she said.

Carafano believes that both Iran and Turkey have sided with Pakistan over Kashmir for different reasons. “Neither likely have any impact on Kashmir.”

Singh said China’s investments in Turkey are again circumstantial and a matter of convenience and saving some money.

“China is known to be using its own facilities, human resource, and labor when it comes to projects and investments overseas. This is a known fact. In that context, dealing in a currency swap arrangement is not surprising, plus if you look at the exchange rates, both Lira and Yuan are of the same value and cheaper than a dollar,” Singh said, adding that both currencies are valued at 0.14 U.S. dollars.

“Therefore, even though for China this must be beyond economics, but for Turkey, it is again about convenience and saving some bucks,” she said.

Singh mentioned that, like the $1 billion currency swap arrangement between Turkey and China signed last year, India promised a $2.3 billion deal to Turkey in 2019 involving the production of five fleet support vessels. The deal was paused in October 2019 due to Turkey’s increasingly close relationships with Pakistan and due to cost reasons, but later, the Indian government reaffirmed it and signed the contract in February.

“However, after much consideration and a strong statement released by New Delhi rejecting all references made on Kashmir by Turkey and Pakistan, India went ahead with the formal contract this year,” she said.