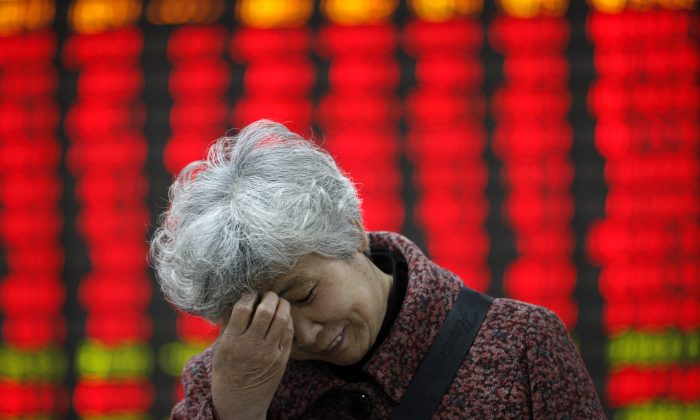 An investors stands in front of a stock ticker board on April 7 in Huaibei, Anhui Province, China.(ChinaFotoPress / Stringer)
Business & Economy

The lack of support from the Chinese Communist Party is surprising. In the past, authorities would typically step in to provide last-minute funding or debt restructuring to avoid a default.

But no one has stepped in for Cloud Live, which could signal a change in official policy to reform the Chinese bond market, in an effort to deleverage corporations and rein in excessive risk-taking by investors.

If true, more onshore defaults should follow, which would increase yields significantly in the Asian junk bond market.

Cloud Live said it only raised 161.4 million yuan ($26 million), or 240.6 million yuan short of the amount needed to repay debt totaling more than 400 million yuan, according to a regulatory filing in Shenzhen, where the company’s stock is listed. The payment was due on April 7.

Chinese authorities have been reluctant to let companies default.

The company, which was predominantly a restaurant business, went into cloud computing late last year. The bonds were originally issued in 2012 with a 6.78 percent coupon. Yields on the bonds jumped to over 20 percent in early April as the company’s financial position worsened. (A bond’s price and yield move inversely.)

But contrary to letting market forces play out, Chinese authorities have been reluctant to let companies default.

In March 2014, the maker of solar equipment defaulted on its interest payments and was in bankruptcy. But seven months later, the company unveiled a complex corporate restructuring plan to repay the debt. Jiangsu Golden Concord and eight other investors together injected 1.46 billion yuan of capital for a controlling equity stake. The restructuring forced most bondholders to take up to an 80 percent haircut.

The guarantee was telling. For one, it placed the interests of small investors who owned subordinate exchange-traded notes ahead of institutional investors who held more senior bonds. It was also unclear what financial windfall, if any, Great Wall received in return for its guarantee.

The logic behind this is to avoid social instability by not letting investors incur losses. Excessive bond defaults could spark protests and social unrest, threatening the power of the ruling Party.

Unlike in the West, where investor psyche has been honed over the generations to expect losses, Chinese retail investors are still learning about investing. In China, households are traditionally taught to sock away money, and value retention is considered to be paramount to gains.

The Shanghai Stock Exchange has only operated for 23 years (almost entirely in a bull market), so most small-time investors haven’t lived through too many downturns. Because of expectations the Party has created about its outsize role in the economy and society, Chinese people have been trained to associate their wealth, fortune (and misfortune) with the Party’s policies. If the current period of investment gains suddenly comes to an end, the public will look to the regime for blame.

“The way the government dealt with Chaori’s default suggests that it is afraid of potential protests by retail investors,” Yang Delong, a fund manager at China Southern Fund Co., told the Wall Street Journal at the time.

But that paradigm might be changing. Cloud Live isn’t the first Chinese firm to default, but it may just be the first to not receive a bailout. China’s official news agency Xinhua called Cloud Live’s default “precedent-setting.”

At the 2014 National People’s Congress (NPC), Premier Li Keqiang said corporate defaults would be unavoidable. In fact, Chaori and another company last year were the first two onshore bond defaults in history. While bondholders were eventually paid in both cases, the events were the start of a slow shift in official thinking on bond defaults.

Cloud Live recorded a net loss of 60 million yuan in Q1, and had losses in excess of 500 million yuan in both 2013 and 2014. According to the South China Morning Post, former Cloud Live Chairman Meng Kai was under investigation since last December for certain securities regulation violations. He subsequently resigned from the company’s board.

While Cloud Live is a relatively small company, the decision to let it default is historic. As Chinese regulators are likely to allow further bloodletting, investors will need to begin performing more due diligence before investing in onshore corporate debt.

Broadly speaking, Asia’s junk bond market is in the midst of a rally. As of last Friday, the benchmark high-yield J.P. Morgan Asia Credit Index rose 1.2 percent from the beginning of the month, after rising almost 3 percent over the last two months.