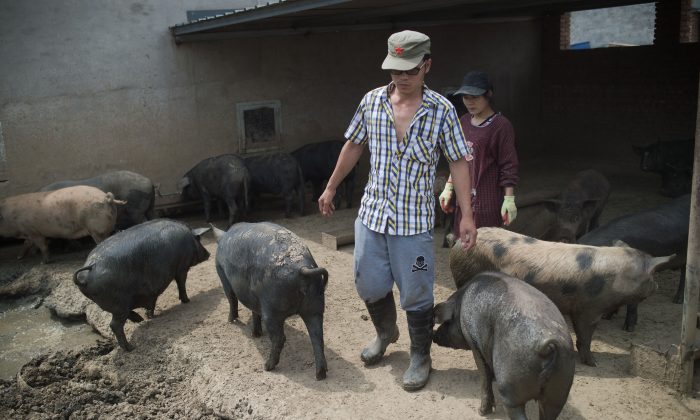 A pig farm on the outskirts of Beijing on June 5, 2017. (Nicolas Asfouri/AFP/Getty Images)
By Chriss Street

China’s National Development and Reform Commission has authorized banks to loan farmers cash against their live pigs in a capitalist move to increase pork production.

Although China is a world-market leader in several economic fields, it is remarkably backward in other sectors, such as agriculture—which is largely run by an impoverished peasant class that struggles to feed itself and the nation, according to Enodo Economics, an independent macroeconomic and political forecasting company that focuses on China.

China’s Communist Party nationalized all land, killed about two million farmers labeled as “landlords,” and then forced the remaining peasants into farm collectives after gaining power in 1949.

On the verge of starvation 40 years ago, peasants revived family farms and tilled their land as they saw fit. The illegal move set off a series of capitalist-style overhauls that remade China into the world’s fastest-growing economy.

Chinese families with plot sizes as low as a quarter acre now operate about one third of the world’s 570 million farms. Without any land ownership rights to borrow against, Chinese rural household incomes average less than a third of urban households.

The 2018 outbreak of African Swine Fever (ASF) resulted in death or government culling of half of the 440 million pig population, which have been the largest revenue source for Chinese farmers.

Beijing instructed local governments “to resolutely defend and prevent further spread and dissemination of the disease.” But by shifting the massive financial costs for culling pig herds down to the provinces, there was little local motivation to enforce the edict.

With almost no compensation, family farmers were also disincentivized to disclose suspected ASF cases. Pig speculators bought suspect diseased animals on the cheap and then spread the outbreak by selling pork in other communities below market prices.

Some speculators allegedly used drones to drop contaminated pigs into farms. Once the fear spread of a potential ASF outbreak, speculators could buy pigs on the cheap, then wait to sell the animals later when prices bounced back up.

China’s pork output reached about 42.6 million tons throughout last year, dropping by 21.3 percent annually, according to the National Bureau of Statistics.

Total losses through September 2019, including the government tapping strategic pork reserves and taking other measures to boost supplies, were estimated at about $141 billion, according to the president of China’s College of Animal Science and Technology at the China Agricultural University. Rather than reversing the 50 percent jump in prices, Beijing’s authoritarian actions contributed to pushing annual pork inflation up 135 percent by March 2020.

The wholesale price of China pork on March 6 was $3.22 a pound, versus $0.66 a pound for U.S. pork. Beijing is trying to import supplies to hold down prices, but China lacks the logistical capacity to offset domestic live hogs with chilled or frozen imports.

“China’s failure to contain ASF has been a disaster for the myth that an omnipotent Communist Party can best serve the people,“ Enodo Economics said.

With all else failing, China’s National Development and Reform Commission issued a joint statement with the Ministry of Agriculture and Rural Affairs to allow domestic banks to add live pigs to the list of eligible collateral for loans. But granting 200 million family farms access to capitalist asset-backed lending could further undermine the Chinese regime’s iron grip on the rural countryside.